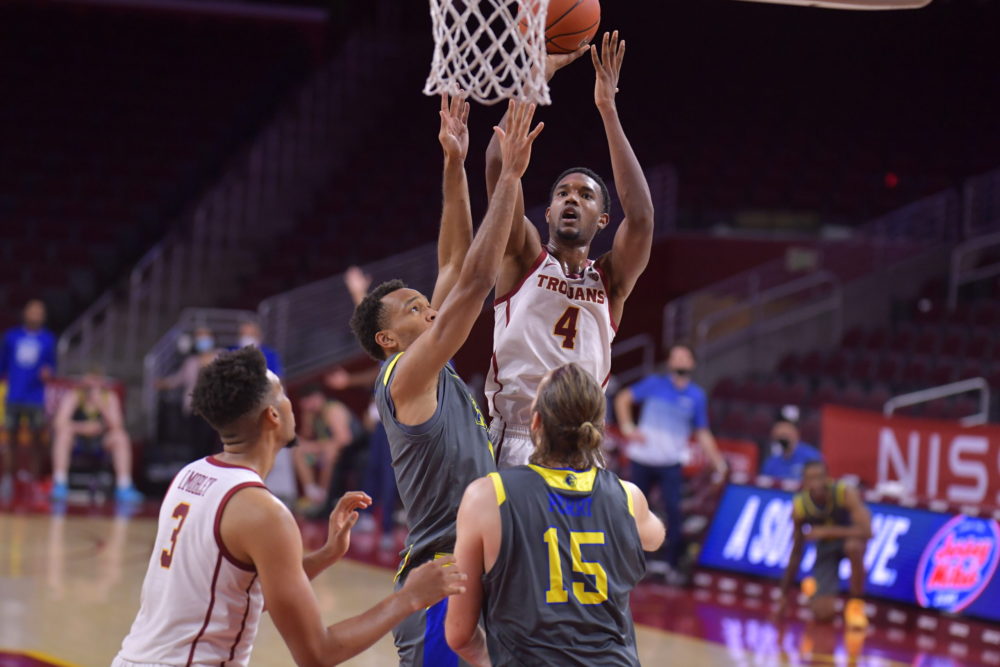 Over the next several weeks I will present my choices for the top five Trojan centers, forwards, shooting guards and point guards. I am only considering their careers at USC and not looking at their post college careers. It is difficult and will result in some subjective decisions to compare a one-and-done player with someone who played for the Trojans three or four years. I’ve decided to exclude any player who did not finish his college career at USC, which means I won’t include players like Hank Gathers, and I have ranked my picks one through five.

Although I never saw the undersized 6’6” “Reckless Russian” play, it seems impossible not to list him first. His nickname was coined by former Trojan broadcaster Chick Hearn and he was a two time first team All American in 1961 and 1962 under head coach Forrest Toogood. He also appeared on the cover of Sports Illustrated in 1962.

Rudo won the Trojan most valuable player award and led the team in scoring in each of his three seasons and had a career average of 18.8 points and averaged over 20 ppg in his junior and senior seasons. His career average is second highest among Trojans who scored over 1000 career points and he led USC to its last outright conference title in 1961.

In his 79 games he grabbed 831 rebounds which is still the fifth most by any Trojan and he averaged 10.5 rebounds per game which is tied for fifth in school history. He went on to play three seasons in the NBA before retiring after being diagnosed with Non – Hodgkens Lymphoma. His number 44 jersey is retired and hangs in the rafters in Galen.

Picking the top five centers is tricky. The Trojans listed Evan as a forward and several players on my “Top” lists are included based on where I think they fit rather than the position label used by USC.

Evan was either the highest recruit the Trojans have ever brought in or tied for the highest with OJ Mayo. Evan’s one year at USC didn’t disappoint. He was a consensus second team All American, swept the conference post season awards and led the Trojans to the Elite 8. He is expected to be selected with one of the top picks in this summer’s NBA draft.

In Evan’s one season at Troy he showed he can dominate on both ends of the court. He averaged 16.4 points, 8.7 boards, 2.4 assists and converted almost 58% of his shots. His 540 freshman points is the third highest freshman total behind only Harold Miner and Mayo. His 286 boards is the second best freshman total behind only Taj Gibson and his 95 blocked shots is the second highest season total ever at USC for any class, five behind Gibson’s 100 as a junior.

Onyeka was named California’s Mr Basketball twice before becoming a Trojan. His very big freshman season led to being selected sixth in the NBA draft. The 2020 Trojans finished the season on a good run but the pandemic eliminated post season opportunities. Onyeka was first team All Pac 12.

Big O averaged 16.2 points and 8.5 boards and made 61% of his field goal attempts in his one season at USC. He scored 454 points, sixth most for a USC freshman, and grabbed 242 rebounds, third best for a Trojan freshman. His 76 blocked shots are the fifth highest season total for any Trojan.

Ron was part of the 1968 recruiting class with Paul Westphal and was a key part of the Trojans’ 24-2 season in 1971. He was a 6’8” bean pole who weighed in at 195 pounds and often was matched against much bigger players. Ron is easily the best rebounder in Trojan history.

In his three seasons Ron averaged 14.2 ppg and 13.7 rpg. As a junior he averaged 15.3 rebounds. His career leading rebounding total is 1067 in only 78 games. He has the first and second highest season rebound totals in program history and scored over 20 points and collected over 20 boards six times, a USC record. He also scored 1105 career points and was first team All Pac 8 in his last two seasons.

Nick was not a big name recruit for Tim Floyd’s Trojans and barely played as a freshman, but his career took off in his next two seasons.  He was selected with the 16th pick in the NBA draft after his junior season in 2011.

Nick averaged 10.7 points and 9.4 rebounds as a sophomore. He was second team All Pac 10 and was voted the conference’s Most Improved Player. He exploded in his junior season averaging 17.1 points and 10.3 rebounds and was first team All Pac 12. His Trojan career averages are 11.1 points and 8 rebounds.

Nick had the third most rebounds at USC in a single season with 350 as a junior, behind only Ron Riley’s best two seasons. Nick shot over 50% from the floor all three years and his career free throw percentage is just under 75%.

Brian Scalabrine played on the 2001 Elite 8 team and played center/forward. He would have been my number 6 center.