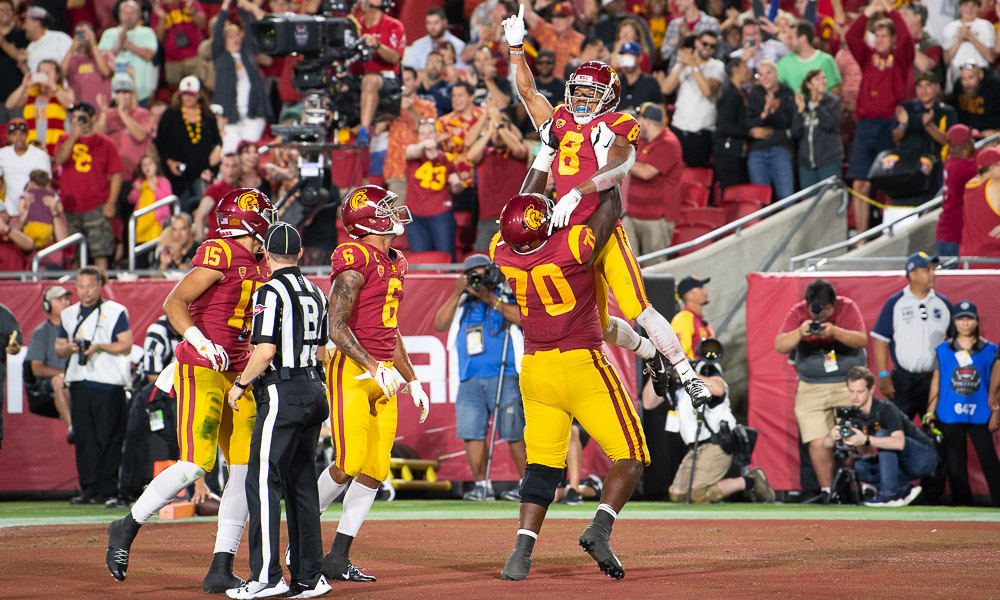 With a six-game regular season, it was known heading into this announcement that USC would play the five other Pac-12 South teams, plus on crossover game against a North team.

The huge news is that the Pac-12 will indeed include 9 am games this season, and USC is involved in the very first one. Arizona State will travel to the Coliseum on November 7 in a game that will kick off at 9 am and likely go a long, long way in deciding the Pac-12 South race.

According to USC, this will be the earliest game for the Trojans since at least the 1950s.

USC nipped Arizona State last season after scoring 28 points in the first quarter and then holding on for a 31-26 win in a game that Sun Devils’ talented quarterback Jayden Daniels did not play.

Arizona State coaches have done everything they can to build a recruiting rivalry with USC and have done so by targeting Southern California prospects. This trip to Los Angeles will be a big opportunity for the Sun Devils to plant a flag in the region, and likely USC’s biggest in-division opportunity to make a statement that they are the Pac-12 team to beat this season.

USC has won four of its past five games against Arizona State.

Week 2 will see the Trojans heading out to Arizona to take on the Wildcats. Arizona has been hit hard by transfers this offseason and have lost longtime starting quarterback Khalil Tate. The Trojans have beaten the Wildcats in the last seven meetings and are 16-2 against them dating back to 2001.

In Week 3, USC is on the road again and will head to Salt Lake City to take on Utah.

The Utes are team that lost a ton of talent from last season–especially in the defensive backfield–and are another team replacing a longtime starting quarterback. If USC had to travel to Utah, doing so on Nov. 21 will hopefully work out better than Dec. 12, in terms of weather. The challenge of a road game at Utah should be significantly diminished this season as well, as the MUSS (Mighty Utah Student Section) makes for one of the best home atmospheres in the conference.

USC and Utah have alternated wins since the 2014 game, as the home team has won each of the past seven contests.

With Arizona State and Utah likely posing the biggest hurdles on the Trojans’ path to the conference championship game, the fate of the season could be decided within these first three weeks.

USC will then return home to face Colorado in the Coliseum on Nov. 28, as the Buffaloes are led by first-year coach Karl Dorrell and are yet another program that will be starting a new signal-caller after losing longtime starter Steven Montez.

Week 5 features USC’s lone crossover game of the season and also USC’s lone Friday night game of the season, as Washington State comes to the Coliseum. The Cougars no longer have Mike Leach along the sideline and this will be USC’s first up close look at head coach Nick Rolovic.

USC was not originally scheduled to play Washington State this season, as the Trojans were supposed to miss Oregon State and Washington State in its original schedule. Of all the crossover game options, this one would certainly seem to be one of the more favorable in terms of putting together an undefeated season and run to the conference championship game.

USC put on an offensive show against UCLA last season in a 52-35 win, as four Trojan receivers finished with more than 100 receiving yards. Since that dominant run over the Bruins from 1999-2011, UCLA and USC have split the series, 4-4, over the last eight games.

Overall, this is a very favorable schedule for USC, as the Trojans leave Los Angeles just twice and do so within the first three games of the season.

As for the conference, the six crossover games that will receive scrutiny as far as the schedule goes are: Arizona at Washington, Cal at Arizona State, Colorado at Stanford, Oregon State at Utah, UCLA at No. 14 Oregon and Washington State at USC.

The Pac-12 Championship will take place Friday, Dec. 18 and will be hosted by the higher-seeded team. The other 10 teams will play games on Dec. 19, though those matchups are to be determined.