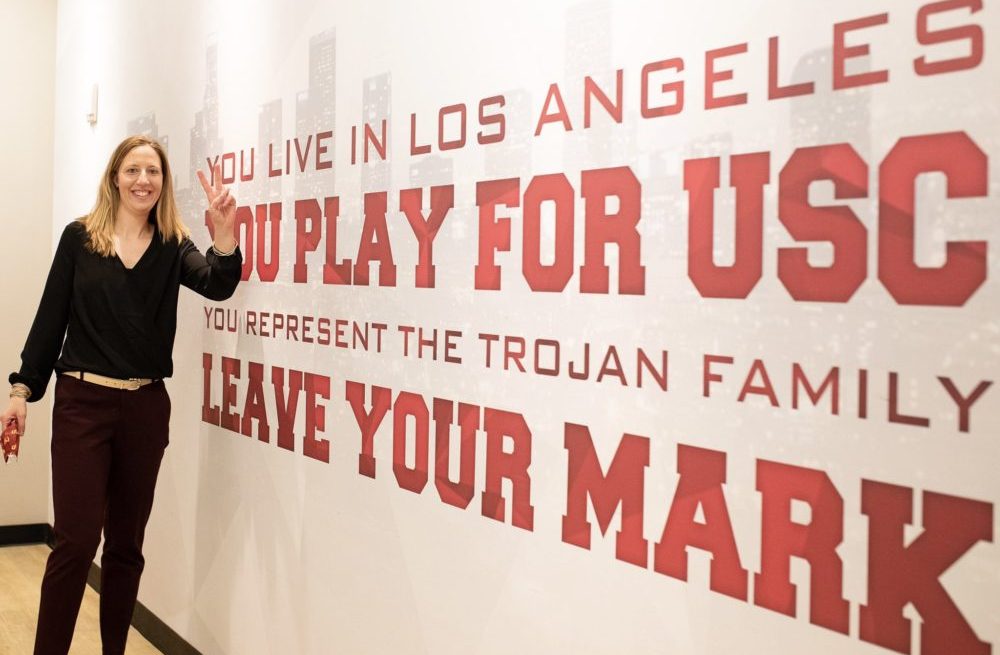 If last week’s press conference showed anything, it’s that former Cleveland Cavaliers assistant coach Lindsay Gottlieb is ready to make history helming the steed for the women of Troy. It may have been over zoom, but this still felt like a press conference straight out of the movies.

There were over 40 attendees including every major news outlet in L.A. This story got national attention for a multitude of reasons.

USC Athletic Director Mike Bohn introduced Gottlieb saying, “Today is a wonderful day for the Trojan family… Lindsay has a proven track record of success and brings instant credibility locally and nationally to our program.”

Gottlieb was commended for her success coaching Cal’s women’s basketball team and Bohn further commended her on her NBA success. When Gottlieb took the stage, she even shared some lessons she learned from the NBA both on and off the court.

“The spacing is incredible… the way you utilize bigs [to spread the floor]… I’m excited to integrate the philosophies I had before,” said Gottlieb, who continued to express philosophies she learned in the NBA about connecting with players off the court as well, which led to better on-court performance, chemistry and trust.

This spoke for itself with many Cleveland Cavaliers players being quoted wishing her well and expressing their gratitude for having her as their coach.

“She’s been amazing. She’s had a voice in our locker room since Day 1. She’s really funny, smart, good to be around [and] knows the game,” said NBA champion, 5-time all-star and SoCal native Kevin Love. “She’s exceptional. She’s going to be a force of nature going forward.”

“I immediately gravitated towards her and have ever since. I always preach positivity. She sees that,” current Los Angeles Lakers center, former Cavaliers player and all-star center Andre Drummond said. “Any time she sees me get down on myself, she always comes over and gives me a pat on the leg and tells me to stay positive and I will be fine.”

Gottlieb expressed a deep sense of gratitude for her time with Cleveland Cavaliers general manager Koby Altman. it’s no wonder why with Altman’s glowing comments about Gottlieb.

“Lindsay Gottlieb has been a tremendous asset to this organization since joining us two seasons ago, and I couldn’t be more excited for this incredible opportunity ahead of her at the University of Southern California,” said Altman. “Lindsay brought an extensive coaching and culture-building background to Cleveland that fit seamlessly with the existing direction in place for this team. What really stands out about her time with the Cavaliers was how well she was able to communicate with our players, while demonstrating different perspectives on a daily basis that helped change the outlook of the game for many of our guys.”

Gottlieb has bigger dreams than just changing the program as she plans to promote greater equality for women within collegiate sports as a whole.

“Here at USC… I’ve been given the canvas to build not just a team, but a program that I hope can be a paradigm for the modern, changing NCAA where women have equal access to benefits and where student athletes have every opportunity to get the most out of their time in college in new and exciting ways,” she said.

The move was an absolute necessity for USC. The team has standout players like Endyia Rogers and Alissa Pili to go along with many returning players with varying skill sets, but have been unable to put it all together for a successful run as of late.

With graduates such as Lisa Leslie and Cheryl Miller, the USC women’s basketball program deserves to be at the top of the collegiate level and Gottlieb might be just the right person to bring them to the promised land.

The reality is that this move is bigger than basketball. This is a move that has drawn national attention to the fact women can be the most successful agents of change in sport and any field.

With the recent WNBA documentary premiering on ESPN and standout ESPN reporter Adrian Wojarnowski reporting on the Gottlieb hire, the future of women’s basketball is incredibly bright.

WNBA players have even graced the cover of Slam magazine and Sports Illustrated to promote the 25th anniversary of the WNBA. Sabrina Ionescu just hit an ice-cold game-winner after showing up to the game in a Southern California legend Kobe Bryant’s jersey.

Speaking of Kobe Bryant, he entered the hall of fame May 15th and his daughter Natalia Bryant will be attending USC this fall. She recently wore what would have been her father’s hall of fame jacket standing on stage with some of the greatest ball-players of all-time. If there’s one thing Kobe stood for in his post-basketball career it was growing the women’s game.

The WNBA is stronger and more popular than ever, which means it’s only a matter of time before the same happens to NCAA women’s basketball. With the new Gottlieb hire, USC could be on its way toward turning this Trojan athletic program into a powerhouse producer of influential women both on and off the court.