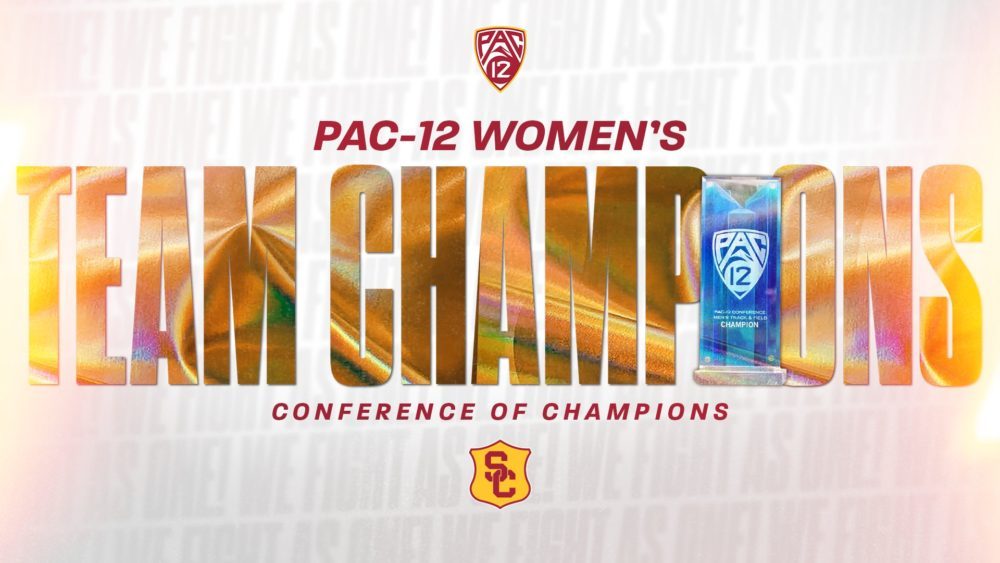 For the third season in a row, the Women of Troy are the Pac-12 Track & Field champions.

Thanks to a dominant showing in the sprints, the women rolled to 162.5 points and a fairly comfortable win over Oregon and the rest of the conference.

The USC women entered the third day of the conference championships, held on the USC campus at Loker Stadium, in 10th place with just 14 points. But the Trojans were unmatched when it came to Sundays events.

Here are a few of the highlights:

The USC women went 1-2-3 in the 100m hurdles. Cockrell led the way, followed by Jasmine Jones and Mecca McGlaston.

And Cockrell could be on her way to a national title in the 400m hurdles, as she posted a PR and a USC record time in winning the event on Sunday.

Terry ran away with the 100 meters, setting a Loker Stadium record in the process.

Terry led another 1-2-3 sweep for the Trojans, this time in the 200, as she beat out teammates Angie Annelus and Lanae-Tava Thomas.

The Trojans women also did extremely well in the 400m. Kyra Constantine won the conference title, as USC runners finished first, third, fourth, fifth, sixth and seventh in the event, scoring a whopping 30 points out of 39 available. The women also won the 4x400m relay, the eighth time in a row the Women of Troy have done so.

On the men’s side, the Trojans just couldn’t compete with Oregon’s depth and success in the distance events. Oregon has now won 14-consecutive men’s Pac-12 track and field titles. The Ducks piled up a conference record 185 points, while USC finished with 137 (it’s most since 2010), climbing from fourth place to second on Sunday. And in the marquee events, the Trojans did extremely well.

Davonte Burnett stole the show on the men’s side, as he helped the Trojans with a meet-best 22.5 points and was named Men’s Athlete of the Meet after he won the 100m and 200m, as well as ran the lead leg for the 4x100m. Burnett was not favored to win the 100m, but a tremendous finishing kick got him over the line first.

Isaiah Jewett won the 800m with a Loker Stadium record and a 1:45.16 time that lowered his own NCAA-leading time this year. He finished with the third-fastest time in the prelims but outkicked three Ducks for the win in the final, falling just shy of setting a Pac-12 championship record.

USC’s Jordan Scott took home the Pac-12 championship in the triple jump. Scott went 16.6m on his third attempt, which was good for a tie with Oregon’s Emmanuel Ihemeje. But Ihemeje got off just one legal jump and Scott won on the tiebreaker on the strength of his second mark, which was a 16.46m on his first attempt.