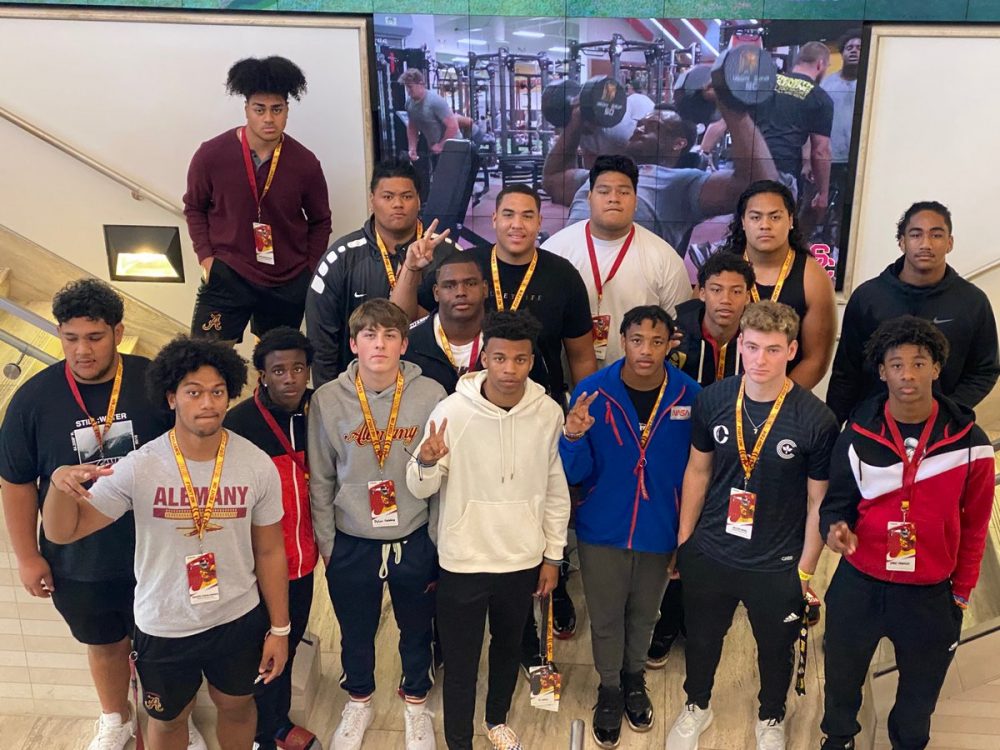 The late signing period for the 2020 recruiting class is just days away, but the USC Trojans spent a bulk of this past weekend looking to make a major impact on future classes. And in other news, USC’s top quarterback target committed elsewhere.

USC hosted an Elite Day this past Saturday, where dozens of prospects in the 2021, 2022 and 2023 classes were on campus to meet and visit with the Trojan coaches. With USC failing to keep many elite local prospects home over the past two classes, head coach Clay Helton and his staff were clearly looking to send a message to local coaches and prospects–seemingly that they will be recruited earlier and harder than they have been in recent years. USC coaches also took the opportunity to extend several scholarship offers to local prospects.

Some of the most noteworthy prospects in attendance came from Mater Dei. USC coaches have been consistent presences at Mater Dei the past few weeks, as often as NCAA rules allow them to be in campus. The Trojans have lost what used to be a pretty firm grasp on Monarch prospects, and gaining that back will be important moving forward. Already, standout 2021 linebacker Raesjon Davis is committed to LSU. But he was in attendance over the weekend, along with running back Marceese Yetts, cornerback Jaylin Davies and 2022 defensive back Domani Jackson. Also in the below photo from Yetts is Serra wide receiver Devin Kirkwood. Davis, Davies, Jackson and Kirkwood all hold offers from USC.

USC coaches have also made several trips to Alemany over the past month, and more than a few Warriors have picked up offers. Quarterback Miller Moss, offensive tackle Saia Mapakaitolo and athlete Jaylin Smith have been offered from the 2021 class, while linebacker Niuafe Tuihalamaka and defensive back Ephesians Prysock have offers in the 2022 class.

It’s always important to have something of a recruiting ringleader on hand for an event like this, and USC hopes it has that in committed 2021 quarterback prospect Jake Garcia (La Habra, Calif./La Habra). It certainly seemed as though he came away impressed with the event.

Overall, the event was very well received by everyone in attendance. It’ll be interesting to see if there is any fallout from Sunday’s report that three defensive coaches will not be retained moving forward, but Todd Orlando and new safeties coach Craig Naivar are prepared to hit the ground running when it comes to recruiting. Naivar especially is regarded as a very strong recruiter, though he has yet to be officially announced by USC at this point.

Here’s a quick glance at some other takes from coaches and prospects who were in attendance.

USC misses out on QB

USC didn’t just have a quarterback seemingly locked up in this 2020 class when Bryce Young (Santa Ana, Calif./Mater Dei) made his commitment to the Trojans. It had the best quarterback, and ultimately the top overall prospect, in the country committed. But Young eventually flipped his commitment to Alabama and USC went looking for a replacement in this class.

After offering several prospects, USC seemed to close in on Blake Shapen (Shreveport, La./Evangel Christian), one of the few prospects left unsigned after the early signing period, and a former Arizona State commitment. The Trojans brought Shapen in for an official visit in January and looked to be in good position for the football and baseball standout.

But an offer from Baylor (and former LSU defensive coordinator, now Baylor head coach, Dave Aranda) was more than enough to capture Shapen’s attention, as he committed to the Bears on Sunday evening.

That could leave the Trojans still searching for a 2020 quarterback to sign on Wednesday, or potentially into the transfer portal, in order to get a fourth scholarship quarterback on the roster for this fall.