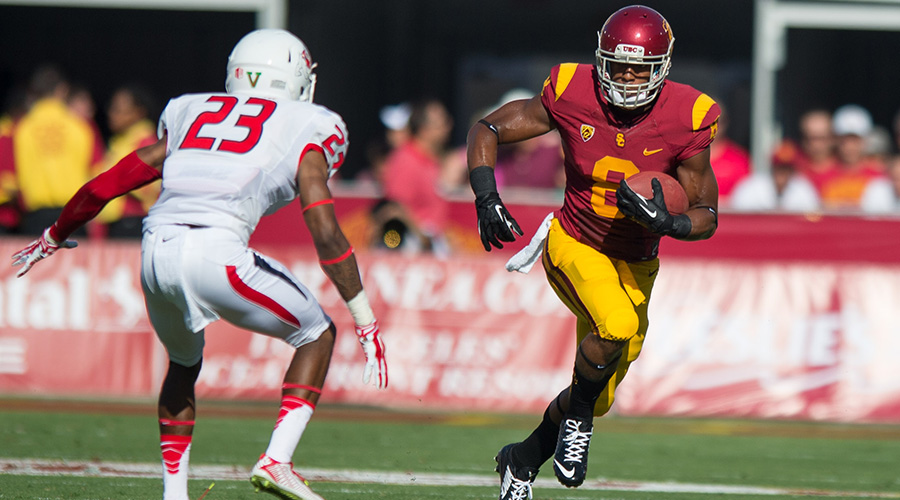 1. USC defensive line vs. Stanford offensive line: A marquee position matchup for fans of physical football, including two of the best linemen in the country — Leonard Williams of USC and Andrus Peat of Stanford. Williams will bear watching after rolling an ankle this week in practice, although Trojans coach Steve Sarkisian has said Williams will be ready to go. Both units are deep and talented, and one of the keys to the game will be how much pressure the Trojans are able to get on Cardinal quarterback Kevin Hogan. Stanford will look to use play-action, and the best way for USC to disrupt that is to be in the backfield early and often.

2. Tying Up Ty: The Cardinal have a versatile weapon in Ty Montgomery, who had more than 2,200 all-purpose yards last season and was the nation’s No. 2 kick returner. This season Montgomery, who had offseason shoulder surgery, has added punt return duties to his resume, and he scored a touchdown last week on his first attempt. The Trojans held Montgomery to four catches for 23 yards in 2013, largely behind the play of Josh Shaw, and with Shaw out the Trojans will look to Kevon Seymour to contain Montgomery. Don’t be surprised if USC’s athletic freshman Adoree’ Jackson gets a shot as well.

3. Unleash the playmakers: The USC offense ran 105 plays last week against Fresno State, and that gave the Trojans’ playmakers plenty of opportunities to do their thing. The results, predictably, were impressive and Sarkisian will likely need to lean on his skill guys just as much this week. Look for explosive plays outside to Nelson Agholor and JuJu Smith, the use of tight end Randall Telfer in the middle of the field, and Buck Allen out of the backfield. Of course, the trigger for all of this is Cody Kessler, who looked in complete command of the offense in the opener.

4. Home Cooking: The Cardinal boast the nation’s longest home win streak at 17 games and are 38-3 at home since 2008. In case anyone remembers, it was Stanford who broke the Trojans 35-game home win streak in 2007. Not that anybody on the USC team is thinking about that stat right now, but it would be a nice added bonus for Trojans fans if they were to come out of the game with a win.

5. Familiar Faces: Even though this will be Sarkisian’s first game in this rivalry as the USC coach, his will not be a new face to Stanford coach David Shaw. Not only have the games between USC and Stanford been tight lately — four in a row decided by less a single digit point difference — but the past two games between Stanford and Sarkisian have also been decided by a single-digit point total. These are two of the most creative young minds in the conference; Shaw running multiple power sets and Sarkisian going up-tempo with USC’s pro-style personnel. Much has been made about some words that were exchanged last season, but the coaches insist that they, and their wives, are fine after spending time together this offseason. That is nice, but it’s not the offseason anymore, it’s a big game, and you can be sure the competitive juices will be flowing for both men.