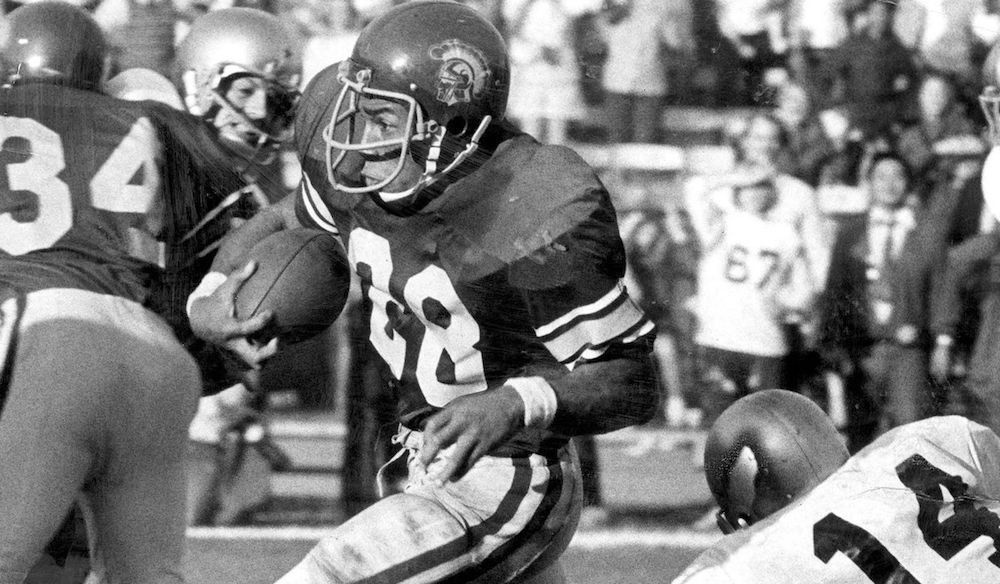 I’m going to tell you a story that will give you a clearer insight into the mindset of the Trojan championship football teams. A mindset that has been consistent down thru the decades. As for me, I played on two National Championship teams – 1972 and 1974 so I have an informed perspective. I tell you that because what I’m going to share is the actual, real mindset of a Trojan championship football team and should be the mindset anytime we run onto the field with the privilege of wearing our Cardinal and Gold representing the only and best hope for West coast college football.

So now we must back up in time to 1974 and the month is November….and November was our month, even then. The place is the Los Angeles Memorial Coliseum and an historic event is going to take place that nobody saw coming, predicted or believed was possible…. except for one person who is the ultimate Sunshine Pumper of all time but only because he truly believes it. It may surprise you, but he has a name. And I’ll get to that soon enough.

Many of you know of “The Game” which took place in the Coliseum that year between us guys and ND. It turned out to be Ara Parseghian’s last regular season game. But it did not start out that way. No, it started off as another one of Ara’s beat down of a Trojan football team in LA. He beat down a Trojan team before, going 51-0 leaving virtually all the first-teamers in that entire game so he could prove a point. He did, and Coach McKay and others never ever forgot. Coach changed his recruiting and went after tough linemen (both defense and offense) and linebackers and fullbacks all with speed. He went out of state as well to get the best. But on this November late afternoon start, Ara was quite content to continue his coaching career at ND especially as the game started and the first half progressed.

Most of you know that we got behind in the first half 24-0 very late into the second quarter. Very little was going right for us and much was going wrong. On defense our game plan included pulling up the two inside backers (Richard Wood and me) to within 1.5 to 2.0 yards of the offensive guards with an outside shade in both B gaps. Our purpose was to keep the guards from pulling and creating C & D gap running lanes and reduce ND’s mis-direction and power blocking options. Turned out to be a lousy plan and created havoc on the inside for us as we were getting cut off a lot in the traffic. The option series combined with ND’s power mis-direction plays were killing us. Our safeties had to roll-up especially Charlie Phillips which created open pass patterns crossing the middle and post routes by slotbacks and certain WR oftentimes in motion.

The game was the typical uber physical and nasty play on the field. Lots of punching, poking grabbing and yacking after the play. After a scoring drive by ND and just after the ensuing kickoff, I’m on the bench with the defense trying to get our heads out of our behinds and get something going. And here comes the Sunshine Pumper stomping down the sideline yelling to each player he could find, in our faces and in particular the defensive starters that “we are going to win this game! Get your heads up and play like Trojans. We don’t quit; not ever and especially not against these guys. We are going to beat these guys…get your heads up and play Trojan football!!!” He really meant it and believed it. He kept that up even when it was 24-0 ND.

Well, as if by his will alone we scored a short while later on a swing pass to Anthony Davis (the #1 ND killer of all time). We finished the first half trailing 24-6 by not converting the two-point conversion attempt. We finished the game winning 55-24 shutting out ND for the balance of the game and scoring 55 straight points and 35 in the 3rd quarter alone which is a record which stands to this day as the most points ever scored against ND in a single quarter…especially sweet as it was on national TV for millions to see.

But who was this delusional Sunshine Pumper? How could he be so arrogant, misguided, over-confident, awash in Hubris and intransient to believe, really believe that “we are going to beat these guys!!!”? This man has the heart of a Trojan, the heart of an All-American, the heart of a team captain, the heart of a Heisman winner, the heart of a NFL All-Pro, the heart of an Athletic Director at the best university in the country. His name….you should have guessed by now, is Mike Garrett. So, put aside what think about Mike and just remember this; he believed when no-one else really did that we were going beat Notre Dame that day.

His attitude and mindset changed my life that day as I saw what happens when you believe in the impossible, give everything you have and I mean everything and don’t focus on the past mistakes but learn. And never ever get physically beaten on the field. Not in practice or in a game. Never. This was a timeless real-life example of what Trojan football should be all about always.

One irony here is that on that day we couldn’t run the ball worth a crap between the 20’s but in the red zone we were deadly. Pat Haden threw spot-on throws into windows that would make anyone proud. Special teams were, well, special. And on defense we finally got our act together. We made an adjustment that I begged from Coach Levy and Coach Lindsay to back up the inside linebackers to our more normal 3 to 4 yards deep. They said no but 2.0 to 3.0 was ok as a deeper set than that would force us to change the defensive tackle assignments too. If you watch the film you’ll see me deeper in the second half. Also, at halftime after watching some film of some of the first quarter, we vowed not to let the ND receivers get off the line of scrimmage cheaply. We took shots at them every play and then some. We had to slow them down, physically beat them up and give the secondary a chance. We had to shut down the inside run game and let Charlie get back to his usual single deep position. The results were five ND turnovers in the second half; three picks by Charlie including a pick six (I got on the shoulder pad of the crossing TE forcing a wider throw and Charlie just ate it up. Charlie was something else.) and two fumble recoveries by some knucklehead Mike linebacker with the first fumble caused by Danny Reece who just pole axed the ND receiver (Danny may have been the most underrated CB in our history btw).

So, there you have some of my recollections…but not all. There is an interesting story to tell about the after-game party my girlfriend threw (who is now my bride of 42 years btw) with her girlfriend from Notre Dame. We had an exciting time but more importantly, me and other USC players drank beer and talked long into the night with certain Notre Dame players about that day and the bowl games to be played later that season by both teams.