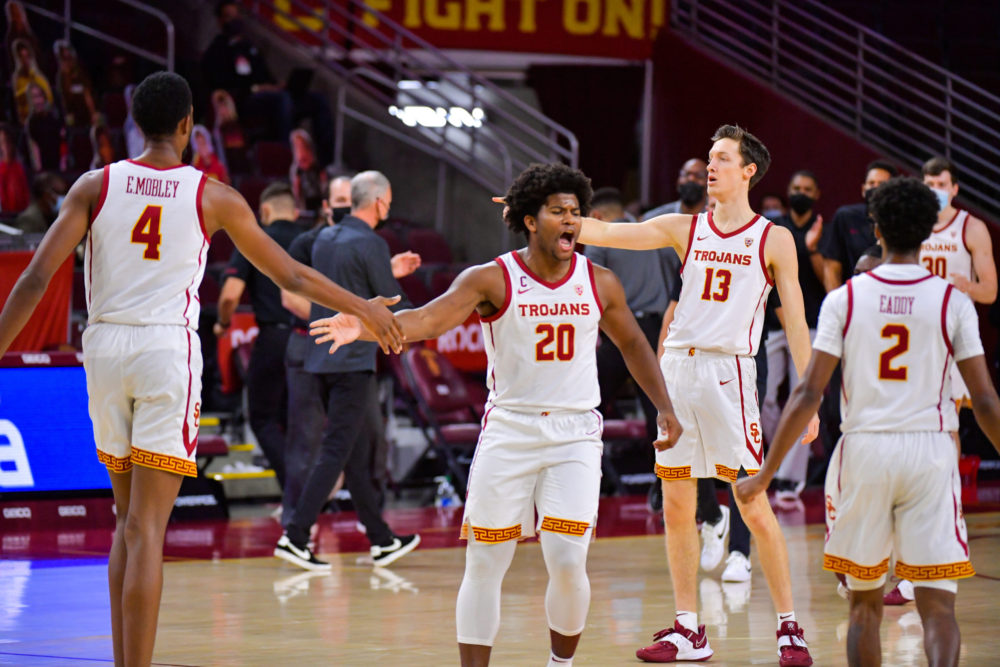 The Trojans have won the last three games against the Bruins including a big 66-48 win at Galen on February 6. After that game the Bruins won five in a row before dropping their last two games at CU and at Oregon. After losing three out of four, the Trojans overwhelmed Stanford on Wednesday. Mick Cronin has yet to beat USC.

Both teams are close to full strength. Chris Smith, perhaps the Bruins’ best player, has missed the last half of the season and big man Jalen Hill has missed the last month for “personal reasons”, which probably translates to unhappiness after being regulated to the bench.

Isaiah White’s availability is unknown after he suffered a leg injury in the Stanford game. He started the last 22 games and will be missed if unable to play.

A Look At The Trojans’ Success

After the UCLA game the post season will be upon the world of college basketball very quickly, so this is a good time to recognize what this team has accomplished so far. In this shortened season USC is 20-6. Through Thursdays games the Trojans are one of only sixteen teams in the nation with 20 wins. A few more may reach twenty in games this final weekend of the regular season.

Some big names have 20 or more wins: Gonzaga, Baylor, Houston, Alabama, Arkansas, Colorado and San Diego State. No teams from the Big East, the Big Ten, or the ACC have won twenty. Most of the sixteen teams are mid to low majors and may need to win their conference tournaments to get to the Big Dance: Loyola of Chicago, Louisiana Tech, Belmont, Liberty, Abilene Christian, Winthrop, Morehead State and Eastern Kentucky.

However one examines this season it has been a big success with opportunities to achieve more. Oregon may win the Pac 12 with one less conference loss than the USC- UCLA winner and therefore a better winning percentage. The Ducks will only play 24 games and 18 conference games and missed one of their two toughest road games at UCLA. If the Trojans could have missed their most problematic road game they would not have played at Boulder and would win the league with a victory on Saturday regardless of whether Oregon wins the Civil War against OSU.

It’s easier to avoid losses when a team plays less games and has less pressure situations. That’s what Andy Enfield emphasized Wednesday night. Should the conference championship be decided because one team has one less loss in two less conference games? Should the PAC 12 have done more to ensure the top teams played an equal number of games?

If UCLA had beaten Oregon at Pauley in a game which was never rescheduled the Trojans would have won the regular season with a win on Saturday regardless of the Oregon- OSU outcome. They would have the tie breaker against the Bruins with a two game sweep and have a better winning percentage than Oregon and the tie breaker because they beat the Ducks in their one scheduled meeting.

Enfield Is The Clear Pac-12 Coach Of The Year

The Trojans were picked sixth in the preseason poll. UCLA was the favorite and both Oregon and Colorado were picked ahead of USC. One TV commentator said this week that Mick Cronin should be coach of the year if they win the regular season. The Bruins were the favorite because they returned almost their entire roster this season. Should the coach of the favorite win the award if his team finishes ahead of the team picked to finish sixth?

I recently wrote that Enfield put together a team of strangers this season. They have twenty wins in a season in which LA County health guidelines wouldn’t permit indoor workouts all summer and the two LA teams had less pre season practice time than almost any other team in the country.

Dana Altman at Oregon also added a number of transfers, but he brought back some veteran players including possible conference player of the year Chris Duarte and key starter Will Richardson. His transfers were from major conferences – the Big 10 and the Big East. The Trojans lost the heart of last year’s team in Okongwu, Mathews, Rakocevic, Weaver and Utomi. Altman may be the best coach in the conference over the last decade but not this year.

The Bruins came into the February game ranked 21st and the Trojans had not yet make the rankings. USC jumped out to a 30-20 half time lead and were in control most of the game. The Trojans made 41% of their shots, 34% from three and had 40 rebounds. USC’s defense shut down the Bruins completely: UCLA finished 34% from the floor, 15% from three and with 33 boards.

The star for USC was Ethan Anderson who made 7-12 shots including five threes and scored a game high 19 points. Ethan has played some of his best games against the Bruins. Tahj Eaddy added 16 points, and Evan Mobley had a good game with 9 points, 9 boards and 4 blocks. Big brother Isaiah grabbed 11 rebounds, Chavez Goodwin added 6 points and 7 rebounds and Max Agbonkpolo finished with 4 points, 3 rebounds and 2 assists.

The Bruins started that game in a hole. They had been starting 6’9” Cody Riley and surrounding him with three 6’6” wings and point guard Tyger Campbell. Riley missed the game due to injury and his usual replacement 6’10” Jalen Hill was not on the bench for “personal reasons”. That left UCLA with a problem matching the Trojans inside and Cronin surprised the Trojans by playing a zone defense for the first time this season. The defensive shift didn’t make a difference and Riley would not have won the game for the Bruins.

Johnny Juzang, a 6’6” Kentucky transfer, was the only Bruin who had some success. He scored 13 points and grabbed 13 rebounds, but no one else scored in double figures. 6’9’ freshman Max Etienne had just enrolled mid season and was asked to try to stop the Trojan bigs. He played pretty well and was the second leading scorer with 8 points to go with 5 rebounds, 2 blocks and 4 turnovers. Tyger Campbell had 7 points and 4 assists.

The Team Stats Favor The Trojans

UCLA Is Built On Team Offense

The Bruins do not have any one star and it remains to be seen if they have an NBA player on the roster. What they do have is a balanced group of players who can score. Juzang leads the team with 14.2 ppg and makes 41% of his shots, 35% from three and 93% from the line. He also averages 4.3 rebounds. He has increased his scoring in the last few weeks.

Sophomore point guard Campbell is listed at 5’11” but looks closer to 5’9”. He has the ability to lose a defender with quick moves, similar to PAC 12 senior point guards Remy Martin and McKinley Wright, though Campbell does not approach their level at this stage in f his career; he can’t take over a game like the other two point guards. He averages 10.6 points and 5.7 assists and makes 43%/ 25%/ 77%.

The two reserve big men are not big contributors. After his game against the Trojans last month Etienne has not had the same success. He averages 3.1 points and 3.4 rebounds. 6’9, 255 pound sophomore Kenneth Nwuba averages less than a point and a rebound per game.

In their loss to Oregon earlier this week Bernard kept UCLA in the game in the first half. He scored 23 points, most coming early. Riley had 11 points and 4 boards and Jaquez scored 15. No one else had over six points. Etienne played eight minutes and scored 4 points and had one rebound. Campbell didn’t score a lot but he did have 8 assists.

The Ducks have a lineup similar to the Bruins in size while the Trojans present “bigger” problems for UCLA.

What To Look For

The first question is whether the Bruins will employ a zone defense again. There is no doubt that the Trojans will be prepared if they do try a zone again.

Riley will likely guard Evan if the Bruins play a man defense and it will be interesting to see who they will use to guard Isaiah Mobley and Chavez. On the other side Enfield will need to consider if one of the Trojan bigs can stay with a quicker Bruin wing. The Trojans have the size to match the Bruin wings in White (if he plays), Drew Peterson, Max and Noah Baumann. When both Tahj and Ethan are in the game together one will need to play against a bigger player.

The Trojans will need to keep Juzang, Bernard or another Bruin from having a big offensive game. They will try to keep the Bruins out of the paint and contest every shot. Campbell is not a good perimeter shooter and most of his assists are off drives into the paint. USC will also try to run Bernard off the three point line where he is most effective.

If the Trojans are having trouble defending one of the Bruins with one of their front court players the Trojans may match UCLA with Evan and four scorers. That would likely give Evan more opportunities inside against Riley without a double team. The Bruins will likely try to double Evan anytime he has the ball inside and pay a lot of attention to Tahj on the perimeter. They may give more attention to Ethan than most teams because of his past success against UCLA.

Drew should have room to operate and it is important that he have a good game and score and rebound. Max will likely get a lot of minutes against Juzang, Jaquez or Bernard. He has three inches on them and longer arms and he is quicker and more athletic.

Let’s start with the bottom line. The Trojans are the better team. They have more talent and can hurt an opponent in more ways. The Bruins have a lot of interchangeable parts, but can’t do as many things at either end of the court.

There are four keys for a Trojan win: Will Evan and Tahj have good offensive games. Will the Trojans dominate the boards and the paint. Will either Drew or Ethan score and distribute, and if they both have good games this one shouldn’t be close. And will the defense keep all of the Bruins near their season averages and not allow any to have a big offensive game.

If the Trojans accomplish these four things they will win handily. Although they are similar in size, the Bruins are not as fast and athletic as Oregon and are an easier matchup for USC. I expect the Trojans to finish the regular season with a good win.