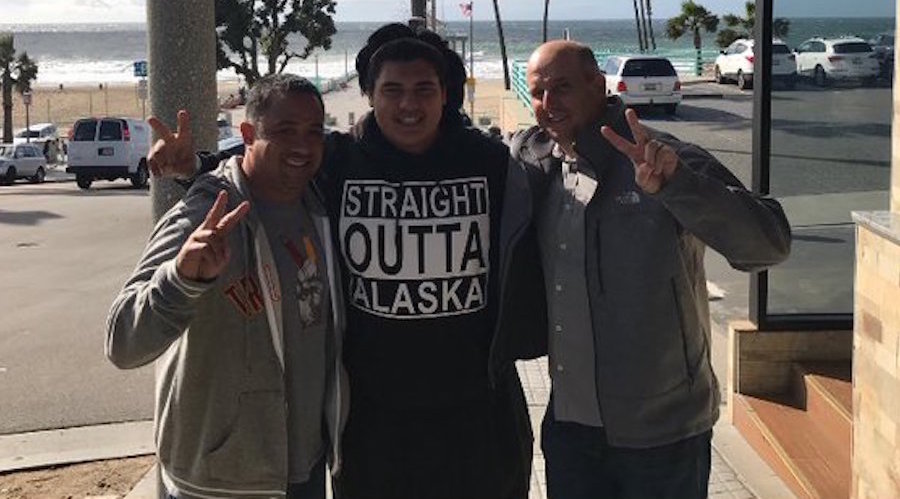 USC played host to a total of nine official visitors this past weekend, including Brandon Pili, who possesses one of the more interesting recruiting storylines of any prospect in the Class of 2017.

Originally from Anchorage, Alaska, the 6-foot-4, 300-pound defensive tackle moved to Oregon just prior to the start of this season without a single offer to his name. Shining on the field for Portland Westview right from the get-go, however, his stock soared in a flash. In fact, fast-forward to the future and he now has seven offers from some notable suitors – including the Trojans, who threw their hat in the ring in early October.

Having built up a solid relationship with the USC coaches throughout the course of the last two months, and with the Trojans set to face Notre Dame at home in a highly anticipated rivalry game, Pili saw this past weekend as the perfect time to take an official visit to the school with his parents in tow, and it’s safe to say that the experience lived up to every expectation that he had.

“My visit went great,” Pili said. “My parents loved it. One of the highlights was definitely the game, and that they won and beat the Irish. It was an experience that I won’t forget. And I liked the team chemistry there, and also the fact that they pay for your school even if you get hurt and you can’t play football anymore.”

Pili also got a chance to sit down and talk to the USC coaches more in-depth than he has in the past. Targeted specifically to line up at nose tackle as well as the three-technique defensive tackle position, Pili said that he liked what he heard when it came to their potential plans for him, not to mention the prospect of early playing time – something they definitely emphasized.

“I got a chance to talk to Coach K.U. [Kenechi Udeze] and also Coach [Johnny] Nansen, who has been recruiting me the most. And then I also had a lot of one-on-one time with Coach [Clay] Helton,” Pili said. “They said that if I come there they’d want me to contribute and help out right away. Their primary guy, Stevie [Tu’ikolovatu], he’s a senior so he’ll be gone. And one of the coaches just texted me and told me that one of their defensive linemen (Noah Jefferson) just decided to transfer, so they’re really in bad need of defensive linemen right now.”

Pili also enjoyed his time with the Trojans players, as well as the other recruits on the trip.

“My host was Zach Banner,” Pili said. “He’s cool. I hung out with a bunch of the players, and they were just saying that USC is the place to be, and that they really like it there. And I hung out with some of the recruits, guys like Foster Sarell and Deonte Johnson, and they seemed like they were enjoying it as well.”

Pili’s parents also had a good time on the visit, and they enjoyed learning about the university.

“My mom really likes the fact that it’s one of the top schools in terms of education,” Pili said. “My dad liked the fact that if you get hurt, they still pay for your education, and he knows about USC and how they prepare players for the NFL, so he likes that as well.”

While both Pili and his parents obviously came away from the experience with positive feelings, as still somewhat of a newcomer to the recruiting process, and with more schools to look at, he said that he did not give a verbal pledge to the Trojans, and to the credit of the coaching staff, they never pressured him into doing so.

“They were nice about it,” Pili said. “They said that if USC is not the school for me, and that if I don’t think I can fit there, then they don’t want me to go there. They said that they only want me if it’s a good fit for me. They don’t want me to be uncomfortable for the next four years, which I feel like that was a good thing to put out there.”

At the same time, Pili admitted that the visit certainly strengthened USC’s chances at landing his signature.

“It definitely improved their standing,” Pili said. “They’re one of my top choices right now – arguably No. 1 at the moment.”

“I don’t know when I want to make a decision,” Pili said. “I’m still really feeling out all of the schools and seeing what best fits me. I’m looking for a place where I can get a good education, and then I’m looking for the best chance to go to the league.”