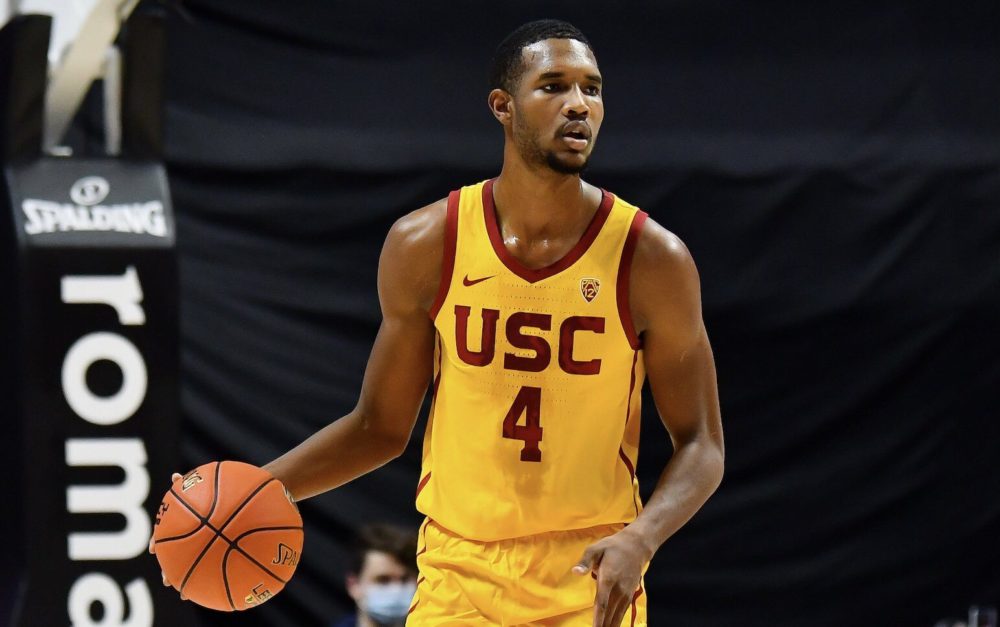 The 4-1 Trojans are preparing to host Stanford on Sunday and USF on Wednesday. The Trojans played their best basketball of the young season in racking up big wins over BYU and UCI, but sandwiched between those games was a three point loss to UConn. Many USC fans are lamenting over the missed shots against the Huskies and rightly suggest that was a winnable game. On the flip side the Trojans had to come from behind to force overtime in the opener against Cal Baptist; the Trojans could easily be 5-0 and just as easily 3-2.

Recent games between Stanford and USC have had spectacular finishes. Last season the Cardinal were undefeated in conference play when they met the Trojans at Galen. They led by 21 very early in the second half before the Trojans started cutting into the lead. In one of the most exciting endings in Trojan history, the Cardinal led by 5 with 15 seconds left and were inbounding the ball under their defensive basket. The inbound pass was deflected and the Trojans wound up with a layup. Stanford switched players to inbound the ball and  Jonah Mathews raced back and intercepted the second inbound pass at mid court, took a couple of dribbles to the left side of the key and passed to Elijah Weaver on the right side of the free throw line. Weaver made a contested off balance three to tie the game and the Trojans won in overtime.

Two years before Cardinal guard Daejon Davis made a half court heave at the buzzer at Maples Pavilion to beat the Trojans; the loss likely kept the Trojans out of the NCAA Tournament. Mathews and Weaver are gone but Davis is in his final year on the Farm.

USC is currently ranked number 50 in a composite of the major polls and ranking services and the Cardinal are 45th. In offensive efficiency (number of points per 100 possessions) the Trojans are a very respectable 36th while Stanford is number 192. USF is 50th after their blowout win over Long Beach State on Thursday.

In the last four games the Trojans have played great team defense and in four of the first five games the offensive production was also very good. USC is out scoring its opponents on average 79-63. As a result of a strong inside game the Trojans have shot 53 more free throws than their opponents but have only made 32 more. The team’s 60% from the line is still a major issue.

The Trojans are making a very respectable 49.8% of their shots.  They are shooting 35.6% from three, a percentage that has been rising. On defense USC’s opponents are making only 35% of their shots and 33% from three. The Trojans have a +9 rebounding advantage over the first five games and have blocked 28 shots compared to 13 Trojan shots being blocked.

Freshman Evan Mobley adapted to the college game right away and has played over 33 minutes per game. The two time WeAreSC Player of the Week has avoided foul trouble and leads the team in scoring (17.6 per game) and field goal percentage (61.1%), and has made 44% of his limited attempts from three. He is also averaging 9 rebounds per game.

Junior Drew Peterson has made a big difference. His eligibility to play this season has been key for USC. Andy Enfield describes him as a complete player and his stats over the first five outings demonstrate his all around game. He is the second leading scorer at 12 points per game and averages just under 4 1/2 rebounds. He is making a very high 60.6% of his shots playing guard or wing and an amazing 55.6 % from three.

Tajh Eaddy has been somewhat inconsistent. He put up big points in three games but was ineffective in two others. He is averaging 11 points on 46% from the field, 45% from three and 89% from the line. His defense has been spotty and is one of several reasons leading the Trojans to play much more zone defense than in past seasons.

In the last game Noah Baumann was on the court far longer than in the other games and responded with a big outing. He raised his percentage from the field to 50% and 33% from three. He made roughly 45% of his threes in his two years at San Jose State so there is reason for optimism that this percentage will increase. He also makes 80% of his free throws so far. Can’t remember when the Trojans had two players shooting 80% plus from the line.

In limited action due to a back injury Ethan Anderson has made 50% of his shots, 43% from three and 75% from the line, all improvements over last year. There is no word yet on whether Ethan will play against Stanford. His quickness on defense, ball handling and leadership on offense are missed.  Reserve big man Chevez Goodwin is making 53% of his shots which are all near the basket.

The player who is not yet playing to his potential on offense is Isaiah Mobley. He has improved his numbers from his freshman season and is averaging 9.4 points and leads the team with 9.2 rebounds per game. However he is only making 41% of his shots and a horrific 40% from the line. Enfield said after the UCI game that Isaiah needs to make more shots.

As expected the front court defense has been very good. All three bigs are doing a good job blocking and altering shots. Last season Enfield admitted the Trojans were a poor zone team. So far this season the zone has been effective and allows the team to switch between man and zone defenses which causes opponents to have to prepare for both.

The Cardinal roster is better this season than it has been in years. Head coach Jerod Haas’ last two recruiting classes have been in the top 10 nationally. Haas played guard for Cal alongside Jason Kidd and closed out his playing career at Kansas. He coached under Roy Williams at Kansas and later at North Carolina.

Stanford has been the vagabond of college basketball so far this season. They opened the season playing in the relocated Maui Invitational which was played in Asheville, North Carolina because of Covid concerns. Santa Clara County is not allowing any team indoor practices and Stanford has therefore stayed in North Carolina since November 28th. They were not able to play three home games this month and hastily scheduled North Carolina A&T to fill in for one of the cancelled games. After the USC game in LA it’s unclear where they will go next. After living out of a suitcase for two weeks the Trojans may be catching the Cardinal at a good time.

The Cardinal have three very good players even after sensational freshman guard Terrell Terry left after his freshman season and was drafted 31st overall by the Dallas Mavericks. Senior forward Oscar da Silva, senior guard Daejon Davis and freshman forward Ziaire Williams are the reason that many analysts picked Stanford to finish near the top of the conference.

The Cardinal are 2-2. In the “Maui” Invitational they beat Alabama in the first round by 18, lost to North Carolina by 4 in the second round and lost to Indiana by 16 in the fifth place game. Most recently they swamped North Carolina A&T 78-46.

Stanford is outscoring its opponents 72-65 and outshooting them 42% to 39.7% from the floor and 31% to 24% from three. These stats suggest that the Trojans likely might not emphasize running the Cardinal off the three point line and instead use their size advantage to impact Stanford’s offense.

da Silva made the ten player All Pac 12 first team last year and many expected him to enter the draft. He is the Cardinal’s best big man at 6’9” and 230 pounds and his return helps make Stanford a conference contender. Last year he led the team with 15.7 points and 6.4 rebounds per game. He made 57% of his shots, third best in the league. This season he has raised his offensive numbers and is averaging 17.3 points and making 64% of his shots and 91% from the line. He will try to use his bulk against the Trojan bigs.

Williams was a top 10 recruit in all of the recruiting services and is Stanford’s highest rated recruit ever. The Trojans badly wanted Williams but lost out in the final couple of weeks. He is a slender 6’8” forward with a build somewhat like Max Agbonkpolo and is projected to be a possible one and done.  Williams is only shooting 32% from the field and 26% from three, and has been to the free throw line for only four shots. So far has not been as productive as expected.  He scored 19 points in the season opening win over Alabama and the national media was raving about him. In the next three games combined he only had 20 points and is now averaging 9.8 points a game. He was expected to be a very good scorer from inside and outside, and though he does lead the team with 6.5 rebounds a game, it is doubtful Stanford can contend unless he puts up bigger numbers.

Daejon Davis is a 6’3” senior guard who has good quickness. He looked very promising as a freshman but did not improve as much as expected over the next two years. So far this season he is scoring much better at 14.5 points per game and making 42% of his shots including 5-15 from three.

Junior Bryce Wills has had a nice start to the season. He is a big guard at 6’6” but does not shoot threes. He is averaging 8.3 points and converting 53% of his shots, but is only 2-9 from the foul line. Wills, Williams and da Silva all average around 27 minutes per game.

USF was once a national basketball power. In 1955 and 1956 they had Bill Russell and KC Jones and won two national titles. During the Russell years they won 60 games in a row in one stretch. Russell and Jones were also two of the Boston Celtic stars who rang up a bunch of NBA titles. The Dons also were 27-0 and ranked number 1 in 1977 when they were led by center Bill Cartwright. That team lost its last two games. Cartwright had a good NBA career with the Knicks and Bulls and played with Michael Jordan for a few seasons.

The Dons have been a bit up and down in their 5-2 start this year. They upset then number 4 Virginia after losing their first game to UMass Lowell. Most recently the Dons clobbered Long Beach State 107-62. In that game USF made 12-18 of their three point shots though they had not been a good three point team in their first six games. The Dons are averaging 42.8 % from the field, 37.4 % from three and 70% from the line.

The Dons’ best front court player is 6’9”, 205 pound junior Dzmitry Ryuny who is from Minsk in Belarus. He is averaging 12.8 points and making a third of his threes and 60% from the line.

I like the Trojans’ chances to beat Stanford if Ethan Anderson is able to play. If he doesn’t play I still think the Trojans will win but it will be a close game. USC needs this win – they have only played two games against quality teams in BYU and UConn. They need to win games against the upper half of the PAC 12 and are catching Stanford at a good time with the Cardinal living out of suitcases on the East Coast for the last two weeks.

I also think the Trojans will beat USF. USC’s size and interior scoring plus the Trojan defense should result in a W.

Since the opener the Trojan defense has been very good, and except for the UConn game the Trojans have also scored and shared the ball well. Hopefully USC has made adjunct in the areas of most concern early in the season:they need  Isaiah Mobley’s offensive production to increase, poor shooting from the foul line, and giving up too many offensive rebounds. If they can fix these problems over the coming weeks the Trojans should be one of the best teams in the conference.