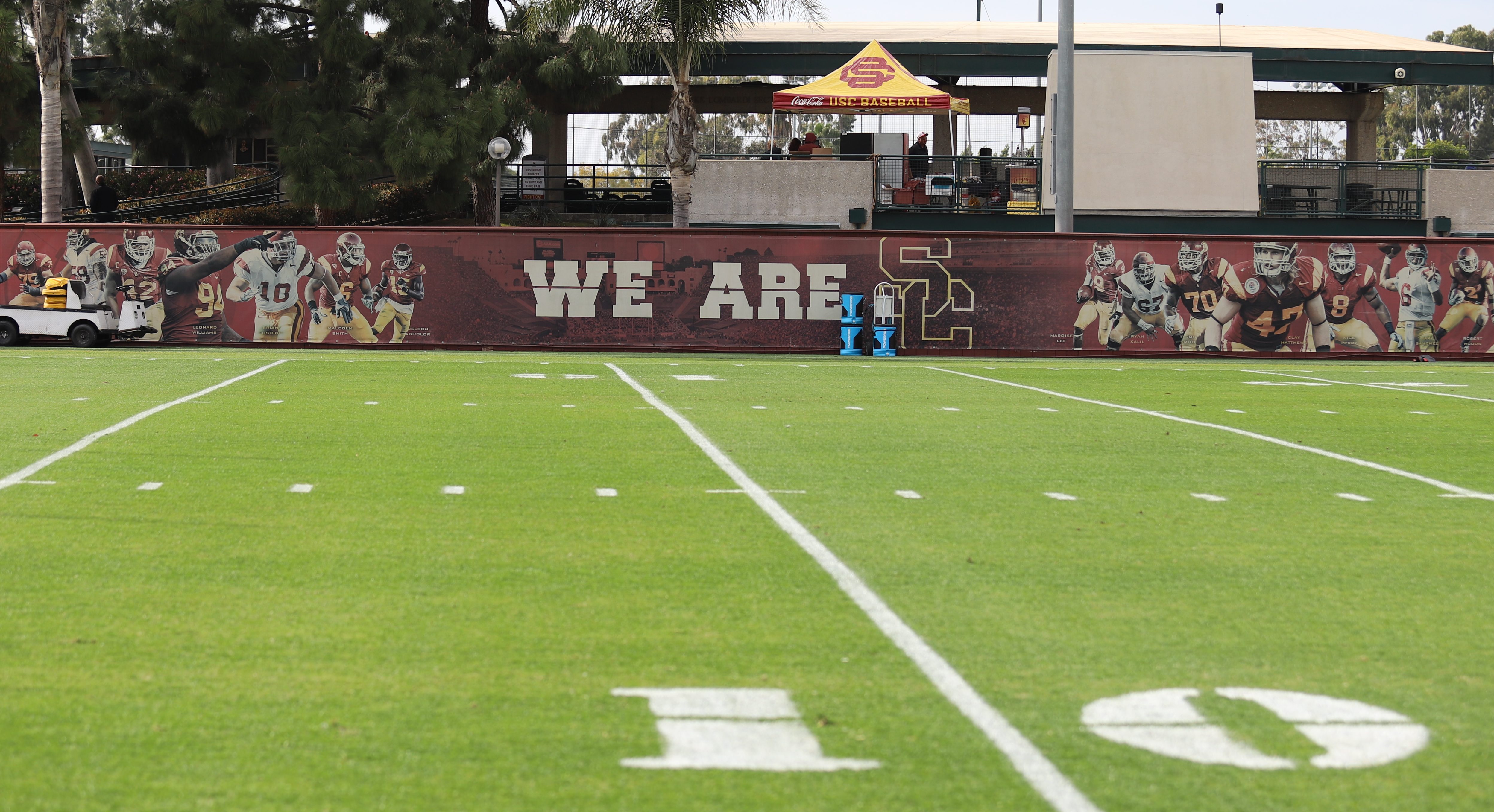 The USC Trojans were back on the field Tuesday afternoon, for the first practice of 2019 spring ball.

It was also the first USC practice without WeAreSC founder Garry Paskwietz. Head coach Clay Helton began his post-practice remarks by making special mention of Garry, whom he called “a great Trojan” and thanked him for everything he did for the football team and the university. It was a touching and warranted tribute, and everyone at this site appreciates that Helton took the time to say that.

Helton then shifted into his post-practice prepared remarks.

It was largely an offseason to forget, and the 5-7 season seemed to never end, as players transferred, an offensive coordinator came and went, and winter conditioning finished without a strength and conditioning coach.

But that might be the last time the 2018 team is mentioned, as Helton said he won’t mention the 2018 season after today. Helton emphasized that this is the 2019 football team, and that they are moving forward.

Part of moving forward for Helton is taking a step back. He said he won’t worry about scheme with either coordinator throughout spring ball, allowing Graham Harrell and Clancy Pendergast to have complete control of the offense and defense, respectively. While the offense will get the headlines this spring with the addition of Harrell and a new offense, the defense will see a few tweaks as well, as Helton said he’s asked Pendergast to simplify the defense.

Rather than in the offensive huddle, Helton said he will spend his time working in the areas of discipline and turnover margin. He also stressed competition, saying that USC’s practice field has always been about competition, and he doesn’t want any player to get comfortable with their standing on the depth chart. To that end, Helton said they will release an updated depth chart every Friday, making sure that the players who are playing the best are rewarded with first-team reps.

Helton said the team collectively has a chip on their shoulder, and that players and the new staff additions have brought a freshness and new energy to the roster and the field.

As for the quarterbacks, Helton said he will let them know where they stand at the end of spring ball, likely meaning that no starter will be named during the spring.

The first thing we got a glimpse of was new punter Ben Griffiths, who was impressive as they worked on coffin corner punts. He was a machine, placing punt after punt somewhere between the 6 and 12-yard lines.

Connor Murphy, Marlon Tuipulotu, Jay Tufele, Christian Rector, Palaie Gaoteote, Jordan Iosefa, Isaac Taylor-Stuart, Briton Allen, Chase Williams, Talanoa Hufanga, and Isaiah Pola-Mao at safety made up the first defensive group, though John Houston and Gaoteote were the primary linebackers much of the day. One big note with those two is that they’ve switched positions, as Houston is playing Mike linebacker and Gaoteote is playing Will.

Hufanga and Pola-Mao were the starting safeties today, though both are still considered “no contact” at this point, so it will be interesting to see what happens at that spot during live tackling practices. C.J. Pollard was not at practice (no reason was given for his absence), and we saw Raymond Scott move back to safety from his middle linebacker position. As an example of what the shortage of bodies looks like there, we also saw backup quarterback Brandon Perdue work at safety today.

Graham Harrell has more than a few admirers in the program, as everybody raved about his personality, demeanor, and control of the offense just a few short weeks into his tenure. Harrell called plays from the top of Dedeaux Field today, and Helton said that half of the practice was unscripted heading into it.

Michael Pittman got things started by catching a touchdown over Briton Allen. It was definitely a “welcome to college football” moment delivered by Pittman to an early enrollee freshman. Pittman got Allen again on a fade for a touchdown a short time later. Pittman looked like a senior wide receiver out there today, and he should be a real leader and a weapon for the USC offense this year.

Allen came back and made a nice play against Devon Williams to know away a pass in the back of the endzone.

True freshman Drake Jackson made his presence felt, scooping up a fumble during run drills and picking up a sack during team drills. Jackson and fellow true freshmen Jude Wolfe physically look like they fit right in as veterans already.

Josh Falo got on the end of a pass, and the tight ends overall had a nice day as they were active in the passing game.

Houston nearly came up with an interception, but when he batted the ball in the air, Pittman came down with a catch.

Solomon Tuliaupupu had two pass breakups that drew praise from the defensive sideline, but few things got the defense more fired up than when offensive tackle Liam Jimmons, a former defensive lineman, was called for a penalty and had to leave the field to do punitive up-downs.

Vavae Malepeai had a really nice run up the middle, and then likely earned some points with coaches where he finished the play with a 70-yard sprint to the endzone.

The quarterbacks threw the ball well today overall. There was one play Matt Fink would likely want to have back, where he was rolling to his left and fired a pass down the middle to an open target in the endzone, but overthrew him a bit. Jack Sears and JT Daniels both appeared in command of the offense, as the quarterbacks put together a long streak of plays during 7-on-7 where the ball never touched the ground.