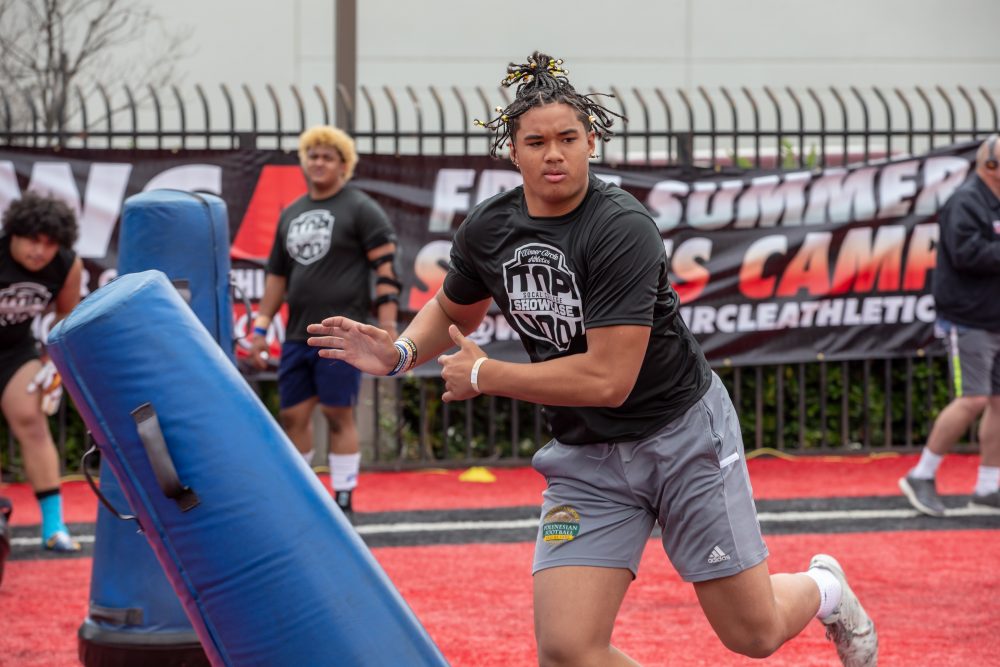 247 Sports released its initial recruiting rankings for the 2023 class on Wednesday and USC targets are dotted among the top 100.

California is well-represented among the top 10, with three Golden State prospects registering among the nation’s elite.

If there’s a local must-get for USC in the 2023 class, it’s two-way lineman Francis Mauigoa (San Bernardino, Calif./Aquinas). He checks in as the No. 4 overall prospect and nation’s No. 1 offensive tackle. He picked up a very early offer from USC and is the younger brother of former Washington State offensive lineman Frederick Mauigoa. LSU, Michigan, Oklahoma, Oregon and others are all coming after him, but he said the USC offer was big when it came in.

The Trojans offered back in February, just after Michigan and Utah. The 6-foot-5, 285-pound Mauigoa could legitimately play both offensive tackle or defensive tackle in college. As has been the norm in recent years, California doesn’t look loaded along either line of scrimmage in the 2023 class (at least not yet–there’s plenty of time for these players to grow and develop), so grabbing Mauigoa will be important.

California also has the Nos. 6 and 8 prospects, in quarterback Malachi Nelson and athlete Makai Lemon–teammates at Los Alamitos. Nelson is the No. 2 overall quarterback and Lemon is the No. 1 athlete. Both have USC offers and it will be interesting to see if the number of quarterbacks USC finishes with in the 2022 class (both Moss or Garcia, or just one) affects Nelson at all. He has offers from just about every big-time program in the country.

Lemon grabbed a couple of big offers–Florida State and Tennessee–immediately after the rankings were released. He could play wide receiver or cornerback at the next level.

Linebacker Tre Edwards (Chula Vista, Calif./Mater Dei) checks in at No. 13 and has an offer from USC, then the local targets jump down to defensive end Matayo Uiagalelei (Bellflower, Calif./St. John Bosco), at No. 73 overall. USC will very much be in the mix for Uiagalelei, the younger brother of Clemson quarterback D.J. Uiagalelei.

Wayne is a prospect who, like Simon, doesn’t appear to have an exact college position yet, but the Trojans were willing to jump in early with an offer–something that eventually helped them land a commitment from Simon. The 6-foot-5, 225-pounder is likely an eventual defensive end, but contributes as a pass catcher on offense as well.

As far as national, long-shot targets, USC coaches haven’t been shy about trying to get into the mix for some big-name recruits. Defensive end Peter Woods (Alabaster, Ala./Thompson) is the nation’s No. 2 overall prospect and likely Alabama’s to lose, but the Trojans have offered and defensive line coach Vic So’oto has made an impression.

USC has also offered the No. 11 overall prospect, safety Rahmir Stewart (Philadelphia, Penn./Imhotep Institute), who attends the same school where former USC safety Gerald Bowman attended. With Penn State in the mix early, as well as some of the SEC’s top programs, he’ll be a difficult get from across the country.

The Trojans have a commitment in the 2021 class from Colin Mobley (Hyattsville, Md./DeMatha Catholic), and USC hopes that gets them in the door at DeMatha for future recruits. One of those is 6-foot-6, 255-pound defensive end Jason Moore, who checks in at No. 24 overall. Maryland has been doing much better with in-state prospects, and Alabama is always a threat there, but So’oto hasn’t shied away from going into that area looking for prospects.

And speaking of that region, USC also recently extended an offer to Joenel Aguero (Danvers, Mass./St. John’s Prep)–No. 43 overall–a 6-foot, 170-pound athlete who is a likely safety, but could also play receiver in college.