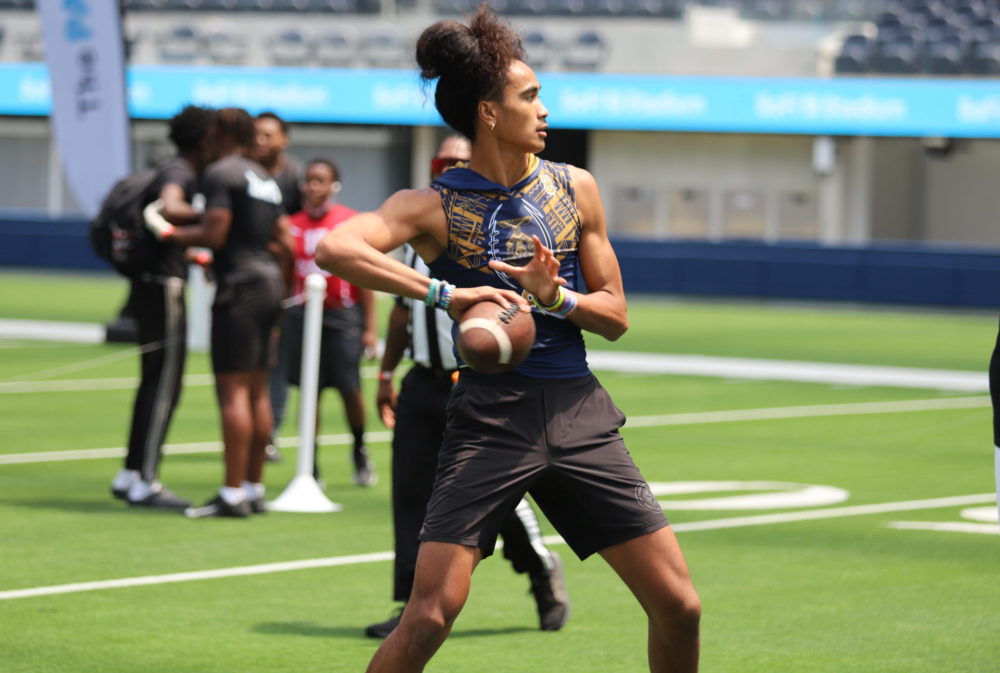 ESPN released its 2023 high school football rankings on Thursday, giving fans an opportunity to see where the network places some of the top prospects schools have been pursuing early, while still putting together their 2022 recruiting classes. Not surprisingly, USC targets dotted the list from the top to the bottom and the Trojans have offered or are chasing dozens of recruits listed. Here is a look at where USC targets landed and a few themes developing.

Notably, USC’s top two quarterback targets aren’t separated by much and the need to land one of them continues to be a major theme for that class. Also, it’s another year with more of the same along the lines in California, where just one defensive lineman and zero offensive linemen are listed.

There aren’t any absolute must-get prospects in the top five like there were in the 2021 and 2022 classes with defensive end Korey Foreman at No. 3 and cornerback Domani Jackson at No. 5. But USC will chase a handful of top-10 prospects.

Defensive tackle Peter Woods (Thompson, Ala./Thompson) is one of just three five-star prospects and checks in as the No. 3 prospect in the country. He’s a 6-foot-3, 275-pound prospect the Trojans were in on fairly early. Getting a big-time prospect out of Alabama and away from the SEC right now is virtually impossible, but there has been some mutual interest and USC landing a commitment from five-star 2022 defensive lineman Mykel Williams (Columbus, Ga./Hardaway) got Woods’ attention. It wouldn’t be too surprising to see USC maybe get Woods on campus at some point, but it’s an entirely different level when it comes to getting a commitment.

USC will also likely chase offensive tackles Kadyn Proctor (Runnells, Iowa/Southeast Polk) and Francis Mauigoa (Bradenton, Fla./IMG Academy). It’ll be a major uphill battle for Proctor, a 6-foot-6, 315-pound prospect who is the No. 6 recruit and has offers from just about every big-time program. And the hill got steeper for Mauigoa when he made the move to IMG Academy from Aquinas High School in San Bernardino. Having him closer to campus would have made the recruitment much easier. As it is now, USC will need to go across the country to recruit the No. 8 overall prospect.

Closer to home is No. 10 prospect, wide receiver DeAndre Moore (Las Vegas/Desert Pines). USC landed wide receiver Michael Jackson III out of Desert Pines in the 2021 class and hopes to repeat the feat with Moore in 2023 (along with 2022 running back prospect Jovantae Barnes). Moore is a do-it-all receiver at 5-foot-11, 190-pounds with offer from everybody. The Trojans would like to go two-for-two with Vegas receivers, landing Moore along with Zachariah Branch (Las Vegas/Bishop Gorman), who is the No. 20 recruit. Branch is a major speed threat at 5-foot-9, 170 pounds and the younger brother of USC’s top safety target in the 2022 class, Zion Branch. Right now Ohio State looks like a real threat for the older Branch, which could impact the younger.

At quarterback, USC has settled on two main targets and both are Southern California standouts. Again showcasing the sharp rise of Nico Iamaleava (Downey, Calif./Warren), he and Malachi Nelson (Los Alamitos, Calif./Los Alamitos) are ranked just a handful of spots away from each other, with Nelson at No. 17 and Iamaleava at No. 23. Nelson will announce his commitment on July 18, with Oklahoma looking like the frontrunner. If the Sooners are the choice, all Trojan eyes will focus on Iamaleava, who took June visits to Alabama, Clemson, Georgia and Ohio State and wowed at camps enough to earn offers from Alabama and Ohio State. Both UCLA and USC are pushing hard for Iamaleava and this looks like a similar situation USC faced in the 2020 class, when Bryce Young and D.J. Uiagalelei were both major local standouts and while USC landed a verbal commitment from Young, the Trojans wound up signing neither when he flipped to Alabama. This time around, USC needs to land one of their top targets.

The one lineman in California listed is there at No. 31, defensive end Matayo Uiagalelei (Bellflower, Calif./St. John Bosco). The 6-foot-5, 265-pound Uiagalelei could play tight end at the next level as well, but the feeling is that he could be a standout defensive end if that’s where he elects to line up. USC is doing well with Uiagalelei to this point, but he’s another California prospect with national options, including Alabama.

There are a couple of longshot top-25 prospects who have mentioned interest in USC, but it’s probably too early to tell how realistic they are as options. Wide receiver Jalen Hale (Longview, Tex./Longview) is the No. 12 prospect on the list and was a standout at The Opening, and cornerback Tony Mitchell (Alabaster, Ala./Thompson) is in at No. 21. They do play positions where USC should have a shot this season and next, and Donte Williams as the USC cornerbacks coach makes it feel like the Trojans have a legitimate shot at any corner in the country.

USC hosted a couple of top-50 prospect on unofficial visits this June, with both running back Rueben Owens III (El Campo, Tex./El Campo) and outside linebacker Raylen Wilson (Tallahasse, Fla./Lincoln) taking trips to Los Angeles. Owens had been committed to Texas before opening up his recruitment.

As far as offensive linemen go, USC is going to make a hard push for offensive tackle Spencer Fano (Provo, Utah/Timpview). The Trojans got him on campus in June for an unofficial visit and both he and his father were blown away by the experience. BYU and Utah could both be strong options and Fano’s importance goes up for just about every Pac-12 team considering he’s the only offensive lineman listed here in the entire Pac-12 footprint. He’s joined on the list by teammate and defensive tackle Howie Longi (Provo, Utah/Timpview) at No. 162 overall, and the only West region defensive tackle on the list.

Nationally, USC should stick around in the mix for offensive tackle T.J. Shanahan (Orlando/Timber Creek), the No. 112 prospect and a 6-foot-4, 310-pound recruit who visited USC in June. Four-star offensive tackle Samson Okunlola (Braintree, Mass./Thayer Acdemy) is the No. 36 recruit, offensive guard Harris Sewell (Odessa, Tex./Permian) is No. 55, offensive tackle Olaus Alinen (Windscor, Conn./Loomis Chaffee) is No. 186 and Isaiah Robinson (Arlington, Texas./Lamar) is No. 258. All have offers from the Trojans. Alinen’s came fairly recently, while Robinson took an unofficial visit to USC in June.

A couple of standout West region prospects are cornerback Justyn Rhett (Las Vegas/Bishop Gorman), the No. 53 prospect and another Bishop Gorman standout, defensive end Jayden Wayne (Tacoma, Wash./Lincoln), the No. 66 prospect who took an unofficial visit to USC in June, No. 104 prospect outside linebacker Tausili Akana (Kahuku, Haw./Kahuku), standout cornerback Caleb Presley (Bellevue, Wash./Eastside Catholic), the No. 155 prospect and another 2023 recruit who visited USC in June, cornerback Cole Martin (Chandler, Ariz./Basha), in at No. 160, running back Jayden Limar (Lake Stevens, Wash./Lake Stevens), the No. 210 prospect who picked up an offer from USC while on his visit with Wayne and Presley, and wide receiver Kyle Kasper (Gilbert, Ariz./Williams Field), the No. 193 prospect who could turn into a recruiting target for 2022 USC quarterback commit Devin Brown. Tight end Riley Williams (Portland/Central Catholic), at No. 187, is one of several big pass catchers being chased by the Trojans.

In Southern California, wide receiver Makai Lemon (Los Alamitos, Calif./Los Alamitos), the No. 61 prospect, is an outstanding athlete who could be a star at wide receiver or cornerback. He’ll get a strong pull to whatever school good friend and teammate Malachi Nelson chooses, but even if that’s Oklahoma, the USC coaches have established a good relationship with Lemon. He’s on that “must-get” list for the Trojans when it comes to “Taking back the West.” Inside linebacker Tre Edwards (Chula Vista, Calif./Mater Dei) is the No. 97 prospect and a guy the Trojans are chasing. Wide receiver Jahlil McClain (Bellflower, Calif./St. John Bosco) is another Bosco standout on the list, at No. 190.

USC has also extended a number of defensive back offers locally and it’ll be very interesting to see how that position shakes out with the Trojans looking like they could sign a very good class of cornerbacks in the 2022 group.

USC got June unofficial visits from inside linebacker Tackett Curtis (Many, La./Many), a 6-foot-2, 205-pound defensive wrecking ball and the No. 84 overall prospect, as well as No. 121 prospect, tight end Mac Markway (St. Louis/DeSmet), a 6-foot-4, 250-pound pass catcher whom Notre Dame is chasing hard.

Defensive tackle Sydir Mitchell (Oradell, NJ/Bergen Catholic), the No. 146 prospect, will hear plenty from high school teammate, cornerback Jaeden Gould, who is committed to USC in the 2022 class. Cornerback Ryan Yaites (Denton, Tex./Guyer), the No. 133 prospect had his first offer come from USC back in February before his recruitment took off. Safety Michael Daugherty (Loganville, Ga./Grayson), the No. 189 prospect, was on the USC campus on June 1 and hit it off with Donte Williams during the trip.