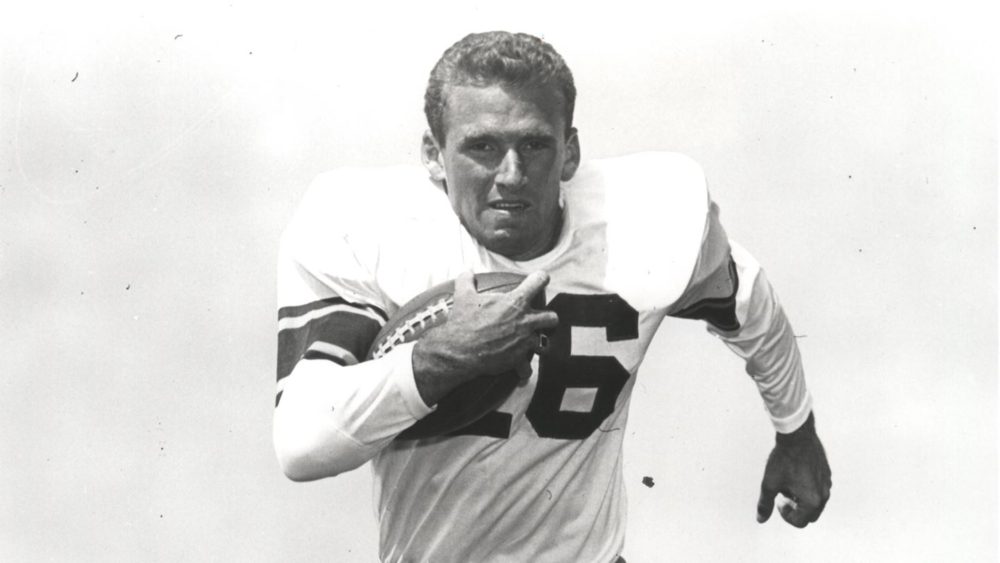 No list of great USC running backs is complete without “Jaguar Jon,” who was a Los Angeles legend, starring for the Trojans as a halfback and as a punt and kick returner, sandwiched between a stellar high school career at Manual Arts, and pro career with the Los Angeles Rams.

He was a three-year letterman at USC, from 1954-1956, and was named to the All-Pacific Coast Conference first team as well as the winner of the Voit Trophy — given to the West Coast’s most outstanding player — as a junior and senior. His senior year, he was unfairly suspended for half the season and still finished 10th in Heisman Trophy Voting and won the Pop Warner Award, given to the top West Coast senior.

Arnett brought excitement every time he touched the ball, with his acrobatic and agile running ability making him incredibly difficult for defenders to bring down.

According to USC’s press release, Arnett also competed for USC’s track team and placed second in the long jump at the 1954 NCAA meet. The Trojans fielded a national champion track team in both 1954 and 1955.

Arnett was selected by the Rams with the second overall pick of the 1957 NFL Draft, and he made the Pro Bowl his first five professional seasons. His seven years with the Rams, combined with three years playing for the Chicago Bears, resulted in 3,833 rushing yards and 26 touchdowns, plus another 2,290 receiving yards and 10 touchdowns. He returned a punt and two kickoffs for touchdowns and threw for two scores as well.

He is survived by his wife Jane, son Matt, daughters Kristen and Kimberly and brother Bill. According to USC, services are pending.

“An outrage that he never made the Pro Football Hall of Fame….still my favorite back. Marv Goux was correct, give him the ball like they did OJ and he would have set records that still stand. Running, receiving, passing (yes, passing), place kicking, intercepting, kick returning….a sensational player. RIP, #26.”

“Jon Arnett was/is my favorite football player of all time. His ability to juke and his incredible balance made him a joy to watch. At Sunday get togethers (during his LA Ram days), the first question when somebody came in was “how did Arnett do?” RIP # 26″

“Jon Arnett introduced me to SC football in the 1955 Rose Bowl. It was a game we lost but Jaguar Jon was like no one I had seen….My all time favorite…He was one of a kind….!”

“My mom and dad are a couple years older and have been die hard USC football fans since the late 50’s. They’ve been to all the big games (OJ, AD, even Barkley at OSU) . When we spoke this evening about the death my dads dementia completely left and he spoke for 20 mins about how much he loved Arnett run. It was a great convo, Jon you aren’t forgotten. Thank you for the memories. RIP”

After the great backs of the late 20’s and early 30’s Arnett and C. R Roberts were the beginning of the modern Trojan dynasty of great running backs
#26 Rest In Peace .. you brought so much joy to so many including this six year old in 1955″

“Sad to see a legend go. I remember watching Jon when I first got my season tickets in ’54. He was amazing and wonderful to watch. Rest in peace Jon.”

“Mr. Arnett, while I never knew you, I’ve heard and read on your exploits in football. You are truly a great man, football player, SC Trojan and Ram.
I also have no doubt that you were a great father, husband, friend, family man and an AA human being. May God bless your Trojan soul as I know he will/is. RIP sir”