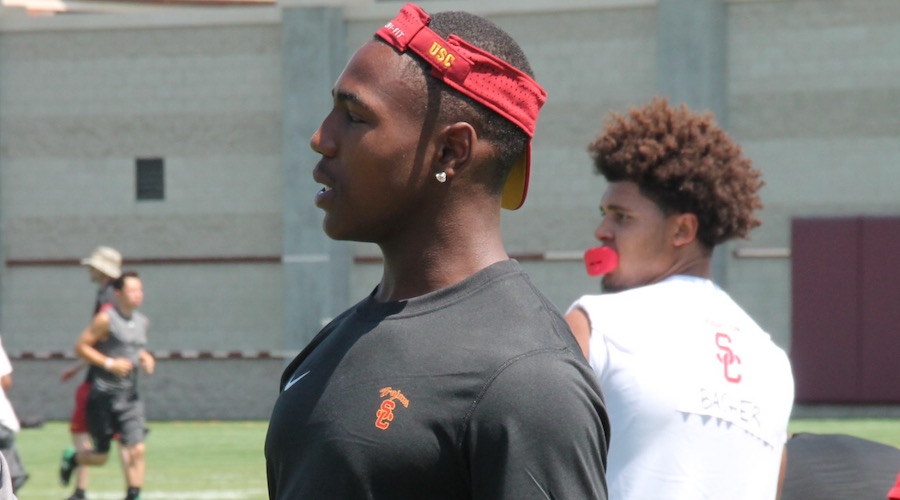 Having scored an offer from USC almost two weeks ago after shining at two consecutive satellite camps in front of members of the Trojans coaching staff – including at the Georgia State Camp where he ran a blistering 4.38 forty with defensive backs coach Ronnie Bradford looking on – under-the-radar Class of 2017 safety C.J. Miller (Powder Springs, Ga./McEachern) waited a total of just five days before giving a verbal pledge to Clay Helton and Co.

“I mean, it was really the tradition,” Miller said of his decision. “Growing up, when I was younger, and they were in their prime, I saw Reggie Bush and those guys. I used to watch them on T.V. And just knowing that a Pac-12 school offered somebody in Georgia, that means they must have thought that I have a special talent. They usually don’t recruit out here. And knowing that USC has had almost 500 players drafted into the league, and looking at what they bring academically, the alumni, the playing time, and then the fact that it’s just in California with all the extra add-ons that come with that, I felt like it would be the perfect spot for me.”

Still, Miller’s decision to commit so quickly came as a surprise to many. After all, hailing from across the country at the same high school in Georgia that produced current Trojans offensive lineman Chuma Edoga, he had never stepped foot on the USC campus.

Miller immediately set out to rectify that last detail following his commitment, scheduling a quick flight out West, and by the time the Rising Stars Camp opened up last Wednesday morning, there he was, working out in front of his future coaches under the Southern California sunshine for the first time in his life.

After a few days on campus, soaking in everything that he could, Miller made the trek back home, leaving more comfortable with his decision than ever.

“You know, it was good hearing about L.A., but I finally got to see it for myself, and I loved it,” Miller said. “I fell in love with the campus. I took a tour while I was there, and the new dorms they have, those are a key add-on. Everybody there showed me a lot of love, and I really do feel like it’s the place for me. I’m really ready to get back up there as soon as possible.”

Of course, Miller’s plan didn’t always involve taking part in the Rising Stars Camp itself, but when the prospect of competition presented itself, he found it too tempting to pass up.

“I wasn’t really sure about taking part in the camp, so I didn’t bring my cleats,” Miller said. “A friend of another commit loaned me his. So, I ran out there and I warmed up, and I ran a 4.48 laser-timed 40. They said that nobody has run time that fast in a long time. So, they were all talking about that. Then I did the DB Drills, and the coaches loved that, and all of the coaches were talking to me about that too. I did some one-on-ones, and then my feet started hurting from the cleats, so I had to stop, but I had already shown them what they needed to see anyway.”

Couple Miller’s lights-out speed and athleticism with the 6-foot-1, 190-pound size that he brings to the table, and it’s easy to see why the Trojans coaching staff was so sold on him.

While in town, he was able to sit down with two of those coaches to discuss his potential future role at USC, and he liked what he heard.

“I got a chance to talk to Coach [Clancy] Pendergast and Coach [Clay] Helton, and they said that I could play corner or safety for them,” Miller said. “They feel like I can make a big impact coming in. I have a shot at starting. The opportunity is there, it’s just on me. I’m willing to work – that’s what I always do.”

Miller also spent plenty of time with a number of current Trojans players, including Edoga, whom he already knew, as well as Iman Marshall, C.J. Pollard and Ykili Ross, not to mention some other members of the recruiting Class of 2017 who are also currently committed to USC.

“Marlon [Williams] and Randal [Grimes], I was chilling with them every day,” Miller said. “It was really good. We’re all ready to get up there and to ball for USC.”

Over eight months remain before signing day, however, and with his recruitment having just recently started to heat up, Miller isn’t ready to completely shut down the process just yet. He holds well over a dozen offers, but USC was the first big-time powerhouse to throw their hat in the ring, followed quickly by Auburn, and he’s interested in seeing what other programs step forward with an offer now that his name has started to get out there.

“I’m definitely committed, but I’m still listening to other schools of course,” Miller said. “I’m not going to completely phase out everybody. I’m going to take all of my official visits.”

With that being said, there’s little doubt that the Trojans are in the driver’s seat at this point in time. USC is the only school that he has pegged for a definite official visit. More importantly, he also plans to make a return-trip to campus with his parents for an unofficial so that they can get a taste of what he experienced last week. That trip is tentatively planned to take place sometime in July.