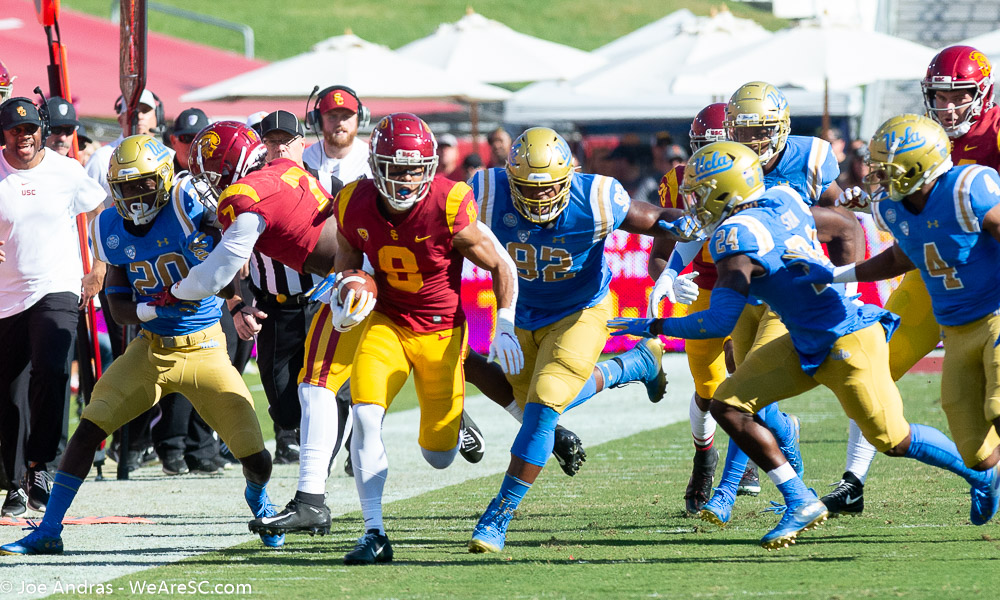 The Pac-12 announced Thursday that the conference would participate in a 2020 fall football season and USC head coach Clay Helton, quarterback Kedon Slovis and wide receiver Amon-Ra St. Brown were still smiling when they met with the media on Friday to discuss the decision.

“I’m excited, obviously of the news to find out that we’re going to have a season,” St. Brown said. “I think we’re all ready for a season. We’ve been preparing for the last two or so months. So, I’m ready to rock.”

Helton called his squad “a very happy football team” following yesterday’s news and Slovis said he’s excited to “get out there and practice.”

Practicing to a full extent will need to wait a little bit, as the Trojans will begin fall camp on October 9, going through a two week ramping up period between now and then. Helton said it would be a continuation of what they’ve been doing the past few weeks.

One week after the conference announced its postponed season, the NCAA ruled that teams not playing this fall could move to a 12-hour week, where teams could use that time for conditioning, meetings and on-field activities with coaches.

USC has been able to take advantage of that with players back on campus to be in a very good position to start the season. The players have been able to use football equipment and train with the coaches in individual drills.

“It’s really put us in a good position,” Helton said.

Helton said he loves where the team is at right now, specifically watching the offense working, with Slovis throwing to wide receivers. He said he feels the offense is in a great position with so much experience returning–nine out of 11 starters–and skill position players that feel much more comfortable and confident in their second year under offensive coordinator Graham Harrell.

St. Brown said Harrell has been able to be more intricate with the details of the offense, and Helton added that receivers like St. Brown are now able to work in the slot, outside and on both sides of the formation because they are able to learn the offense conceptually, rather than “honing in on one single position.”

Slovis and St. Brown are also champing at the bit to get going this fall because they were two players who were going to be slowed during spring. Slovis was coming off an injury suffered during the Holiday Bowl and was going to be on a pitch count during the spring. He said the time off has allowed him to focus on the health of his arm and now he’s feeling as healthy as ever.

St. Brown was coming off surgery to repair a sports hernia and would have missed spring ball. The ability to get to work on his own lit a fire, as he did everything he could to make sure he was back and healthy by the start of the season–whenever that would be.

The ability for programs to conduct daily tests for Covid-19 has been at the center of the Pac-12’s discussion regarding return to play. USC will need special allowances from state and local officials in order to practice–something the Los Angeles Rams, Los Angeles Chargers and San Francisco 49ers have received–and the next step in achieving that likely took place earlier this week, when the Quidel 15-minute antigen testing machines arrived on campus.

Helton said there are USC medical personnel training with those machines now and they are hoping to have them in place by the start of training camp, and perhaps as early as next week. Helton said the goal is to have everything regarding testing protocols in place by the time they start contact practices on Oct. 9.

“I don’t see us not being ready,” Helton said.