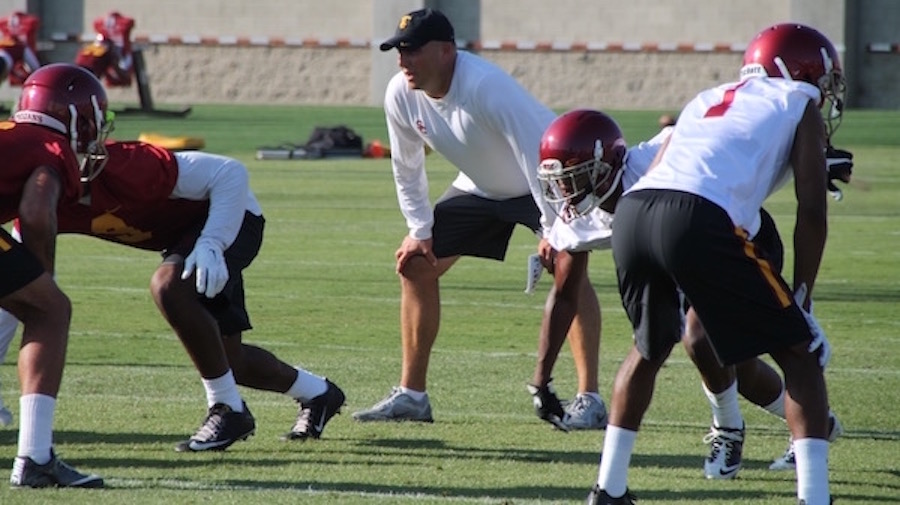 USC announced Wednesday afternoon and it would be pausing workouts for both the football and men’s water polo teams following positive Covid-19 tests for eight student-athletes in those sports.

Workouts in those sports will be paused until at least Monday.

USC said in a statement that, “It is clear from contact tracing that the virus was contracted off campus as a result of increased community spread and not via any on-campus or training activities.”

Two days ago, the LA Times wrote that USC was reporting an “alarming increase” in Covid-19 cases around campus.

In USC’s statement, athletic director Mike Bohn said: “We have effective mitigation strategies in place, but out of an abundance of caution we are pausing athletics activities in football and men’s water polo while we await additional test results and USC completes the contact tracing process.”

The Pac-12 has already announced that it will not participate in any fall sports this season, and left open the small chance that those sports could go forward after January 1, 2021.

The ACC, Big 12 and SEC are all continuing to move forward toward a fall football season, though some programs in those conferences are struggling to keep the virus away from its football team. LSU on Wednesday was without all but four offensive linemen, as that position group was decimated by positive Covid-19 tests or forced quarantine.

Oklahoma was on a streak of success similar to what USC had been seeing, but the Sooners just had nine positive cases on the football team in early August, and six more earlier this week. Head coach Lincoln Riley didn’t specify the position, but said all but one player at a “major position group” was unavailable due to positive tests or quarantine.

Due to a coronavirus cluster in the North Carolina State football program–it announced 27 cases within the athletic department on Monday–the season-opener between the Wolfpack and Virginia Tech has been postponed from Sept. 12 to Sept. 26. North Carolina State’s football team has not practiced since Saturday, when more than a dozen players were kept out of activities due to coronavirus protocols.

Originally, USC was scheduled to open its season against Alabama in the 2020 AdvoCare Classic at AT&T Stadium in Arlington, Texas in 10 days, on Sept. 5.