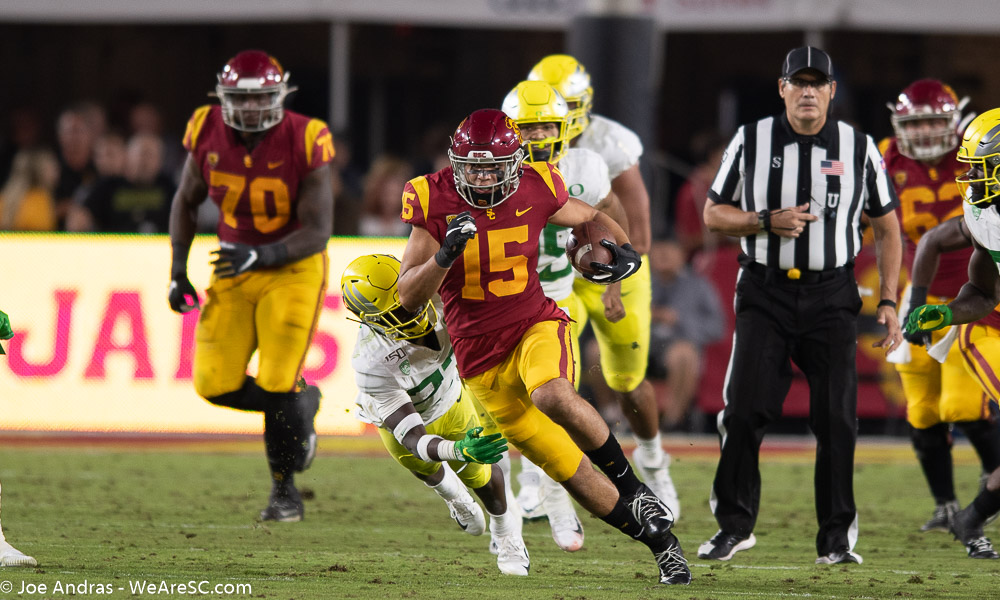 It’ll be the Oregon Ducks lining up across the field from USC on Friday night in the Pac-12 Championship Game, as the conference announced Tuesday morning that Washington would not be able to meet the 53-player threshold in order to participate in the game.

Washington earned the right to face USC in the championship game by virtue of its regular season record, though there were certainly unusual circumstances that helped the Huskies earn their Pac-12 North championship. Washington and Oregon were supposed to play this past weekend and the winner would take the north and one spot in the conference championship game. But with Washington having Covid issues, the Huskies had to cancel the game and won the division by virtue of their 3-1 record this season, compared to Oregon at 3-2. Although, Washington went just 1-1 against its North opponents and never played a road game.

Washington head coach Jimmy Lake on Monday said the Huskies would not have had any offensive linemen available to play in the game on Friday.

Oregon, meanwhile, went just 2-2 against North teams and is on a two-game losing streak — to 3-3 Oregon State and 1-2 Cal — heading into this game. Oregon’s wins came over a Stanford team that lost its starting quarterback to Covid protocol right before the game, against Washington State in a game that wasn’t decided until the fourth quarter, and a three-point win against a UCLA team playing without starting quarterback Dorian Thompson-Robinson.

But the Ducks have a huge advantage over the Trojans as far as preparation for the game is concerned, as Oregon is coming off a bye week and has been preparing to play USC since this substitution was even a possibility. USC has been preparing for Washington since the end of the UCLA game and devoted an entire practice to the Huskies on Sunday.

USC head coach Clay Helton addressed the media on Monday morning, before this announcement from the Pac-12, and said Monday’s practice would also be dedicated to Washington prep, with the coaches beginning to formulate a gameplan for Oregon beginning later this evening. Obviously, the Trojans will now fully change gears with the Ducks firmly set as the opponent.

The Pac-12 is the only major conference in college football that allowed for the possibility of a non-division winner to play in the championship game, once again showing a refusal to protect its top teams from objectively disadvantageous circumstances.

But USC’s players and coaches will more than likely gladly accept this change, as there is certainly some desire to get revenge against the Ducks for a blowout loss last season. USC was scheduled to visit Eugene this season before the schedule was altered and shortened and these two teams were predicted in the preseason to match up in this championship game. USC will have the advantage of playing it in the Coliseum, though that’s where the advantages end.

On the plus side for USC, the Trojans won’t waste another day preparing for a team they won’t play, and now their full attention can shift toward Oregon.

Monday morning, Helton didn’t balk at the challenge of needing to prepare for two teams coming of back-to-back short weeks against a team that — no matter which one it was — would be coming off a bye week.

The Ducks were hit fairly hard by opt outs this season, as they lost standout offensive tackle Penei Sewell and several starters in the defensive backfield.

Oregon is led by a three-headed rushing attack of quarterback Tyler Shough and running backs Travis Dye and C.J. Verdell, as well as a host of players from Southern California — including former USC receiver Devon Williams — always looking to pick up a win over the Trojans.

Helton said that having film of both Oregon and Washington would be helpful in their preparation, and that knowing their schematics and what the personnel matchups would be put the Trojans in a better spot — even preparing for two teams — than they were coming into the season against Arizona State and Arizona, without any film to study.

Matchups between these two teams are always interesting in how they play out with recruits, as Oregon has focused on Southern California standouts in a big way. With the early signing period beginning on Wednesday, recruits who sign that day won’t be able to take this Friday night game into account, but it’s sure to have at least somewhat of an impact on those who wait until February to announce, as well as both the 2022 and 2023 recruiting classes.