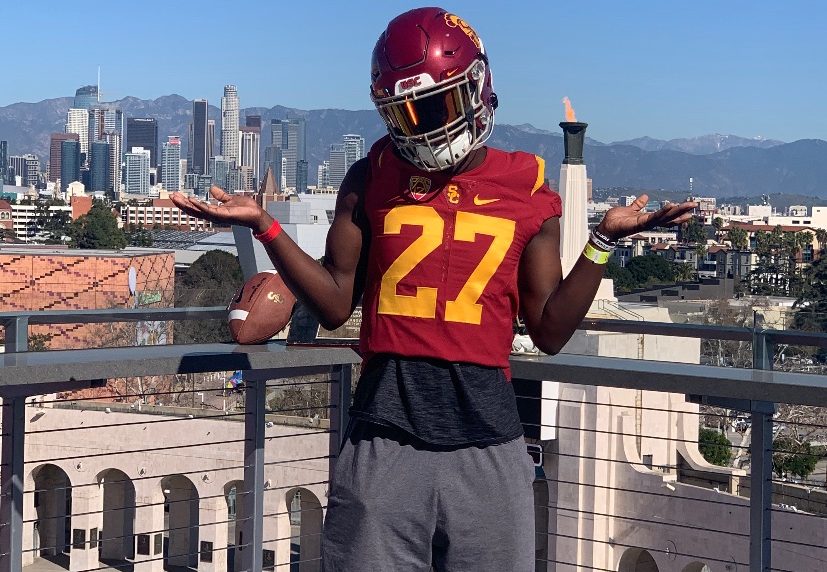 No college football team is as synonymous with a thunder and lightning rushing attack as USC, as the Trojans overwhelmed opposing defenses with Reggie Bush and LenDale White on their way to dominating college football for years. Since that historic duo, USC hasn’t consistently utilized two tailbacks with those diametrically opposed qualities in quite the same way.

But finding that thunder and lightning combination appears to be a goal in this 2022 recruiting class, as USC is in on a number of true speed backs, and has now entered the mix for 6-foot-1, 225-pound Tomarion Harden (Inglewood, Calif./Inglewood).

Harden said his communication with USC dates back to his sophomore year, when he was at Narbonne and the Gouchos put up a dominant offensive performance at Gardena. He said he believes USC running backs coach Mike Jinks was in attendance and after that game, he started receiving invites to USC football games as a recruited prospect.

Now at Inglewood, Harden is looking forward to getting his first real taste of football in a year, as the Sentinels don’t kick off their season until Thursday and will play just four games. But USC coaches didn’t need to wait to see him in game action as a junior before offering, as the offer landed late last week.

“I was excited. I’ve been waiting on that one for a minute,” Harden said of the USC offer that came during a phone call with his head coach and Jinks. “I knew it would all come through soon. I’m pretty excited.”

Harden said the offer from USC is a big one, as it’s his hometown school and he grew up a USC fan.

“I just like the talent,” Harden said of siding with the Trojans. “‘SC has pure talent and a lot of guys made it out to the league. A lot. And there’s the tradition and it’s where I grew up at.”

Harden said he isn’t in a rush to finish his recruiting process, though he will begin narrowing down his finalists after a season that’s scheduled to end in mid-April.

The USC offer joins previous offers from Colorado, Michigan State, Oregon State, Utah and others for Harden. While he checks in as a three-star back and the nation’s No. 632 overall prospect, there is a lot to like when comparing those other offers, as all four of those schools listed have made a habit of turning under-recruited running back prospects into college stars.

And there’s a chance Harden could see his recruitment take off once he starts putting together game film, and the early offer from USC could be a huge benefit, as the Trojans are getting in before that happens. He said Cal, UCLA and Washington have all been in talks and could be on the verge of offering.

Harden has been hard at work this offseason, preparing for a chance to see the field for any kind of season that might take place.

“I’ve stayed focused, stayed consistent and kept working,” Harden said of working out on his own. “I knew we were going to get our season back, so I wanted to stay on the right path and stay focused.”

One area of his game that Harden is looking to showcase is where he feels he’s made the biggest jump from his sophomore yet to now. Harden said his explosiveness and his vision are two things that help him stand out, but it’s taking full advantage of that frame where he can really separate himself as a running back.

“The way I use my size,” Harden said of where he’s taken the biggest step. “Sophomore year I played more passive, but now I play real aggressive. When I find the hole, I hit it more.”

Harden is an absolute load to bring down, but he’s agile enough and fast enough to be a problem for defenders in the open field as well. He’s also a very capable pass catcher, which would help him immensely in the USC offense.

USC just lost a traditional “big back” to transfer, as Markese Stepp has now landed at Nebraska. Neither Kenan Christon nor Brandon Campbell could be considered anything close to big backs, so there is a clear spot on the roster for a player of Harden’s measurables and ability. He said he likes what he’s seen from the USC offense and how he would fit.

“I see USC runs a lot of gun and spread,” Harden said. “All the recent places I’ve played at run a lot of spread. I’m cool running inside zones and stuff out of the spread. I think it’s easier because you can visualize what the defense is doing and what the linemen are doing.”

USC has previously offered a few running backs that would qualify as big backs in this class, but it wouldn’t be surprising to see the Trojans focus on Harden moving forward. In addition, USC is in the mix for some standout speedsters that would pair nicely.

Five-star Gavin Sawchuk (Littleton, Colo./Valor Christian) is touring the USC campus today and the Trojans might be able to get him back on campus for an official visits if things continue progressing. He’s the nation’s No. 1 running back and can do absolutely everything at the position, including hitting explosive plays with his terrific speed.

Fellow five-star running back Raleek Brown (Santa Ana, Calif./Mater Dei) is already committed to Oklahoma (Sawchuk is very much in play for the Sooners as well), but will likely continue to hear from USC all the way up until he signs. At 5-foot-8, 185 pounds, he’s short, but not small and he plays much bigger than his measurables. Still, his ability makes him a “lightning” in this duo and Brown is a homerun hitter from anywhere on the field, surrounded by any number of defenders.

And USC is in the mix for Rayshon “Speedy” Luke (Bellflower, Calif./St. John Bosco), a 5-foot-8, 160-pound dynamo who already has a number of long-distance touchdowns in this early season.

Running back will be an important position in this class, as the Trojans are scheduled to lose Stephen Carr and Vavae Malepeai following the season, and Texas transfer Keaontay Ingram is entering his fourth college season. That leaves just Kenan Christon and Brandon Campbell as potential long-term possibilities at the position. Over the past four recruiting classes, USC has signed just one California running back (Christon in the 2019 class). With Harden on the target list now, USC could potentially land a couple in this class, with some of the top West region prospects still in play.