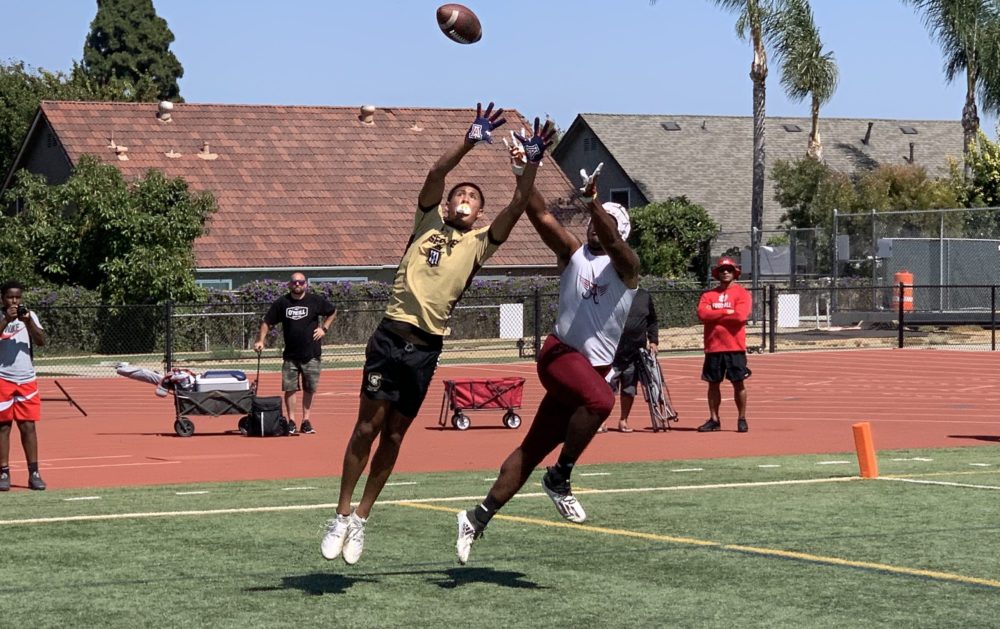 Many of the top teams in Southern California were in action this past Saturday at the Orlando Scandrick Elite 7v7 presented by 32 Cares. That meant a number of USC targets were showcased, including 2022 wide receiver commit Kevin Green (Mission Hills, Calif./Alemany).

St. John Bosco earned the title in a great finals matchup against Servite. Bosco is once again loaded with talent, including a dynamic secondary, which features a number of USC targets in 2023 cornerback Jshawn Frausto-Ramos, 2024 safety Peyton Woodyard and 2024 cornerback Marcelles Williams. With 2023 safety R.J. Jones back there as well, in addition to 2022 Boston College commit Sione Hala, this is going to be a great secondary this year and maybe even better next year. On offense, the Braves got great production from 2022 wide receiver Logan Booher and 2023 four-star athlete Matayo Uiagalelei is a really difficult matchup for defenders at these 7-on-7 events.

Uiagalelei is the nation’s No. 47 overall prospect and showed this past spring that he can be a serious weapon in the passing game, lining up at a traditional tight end spot or split out wide. There were several times on Saturday where he was on the receiver end of back shoulder throws in the endzone where cornerbacks had to respect the fade or ball going up into the back of the endzone and it resulted in easy completions. Uiagalelei also shows good speed and comfort in getting downfield and finding open room to work. What will be interesting to watch going forward is just how big Uiagalelei gets and whether defensive end is the better spot for him moving forward. He said on Saturday that he’s still split on which position he prefers, but he checked in at 275 pounds on his recent college tours and understands his future and potential earning power could be better at defensive end. At either spot, Uiagalelei is a talent and a priority for USC in the 2023 class.

There was just one USC commit in attendance, in 2022 wide receiver Kevin Green. He helped his Alemany team to the semifinals, where they came up just short against Servite. Green played a little cornerback during the day, but his future is at wide receiver and he’s a good one. USC coaches have pitched recruits on being able to play both inside and outside receiver in the Trojans system and Green appears to have the ability to do that. He doesn’t possess overwhelming size, but there is some dynamic short speed and good acceleration that makes him very dangerous in the open field. He’ll be an offensive leader for Alemany this season and should bet set up for a really nice senior season.

One player stole the show during the event and that was 2022 four-star wide receiver Tetairoa McMillan (Anaheim, Calif./Servite). Servite has a very talented quarterback in Arizona commit Noah Fifita, but it’s safe to say the Friars wouldn’t have been in the final without McMillan, who played both ways extensively at wide receiver and cornerback. He’s the nation’s No. 67 player and No. 7 wide receiver, but he’s on my Mt. Rushmore of 7-on-7 performers. He had one play where he went downfield and hauled in a pass over a defender with one hand while making an adjustment on the ball, then continued downfield for what probably should have been called a touchdown, but was brought back and said he was touched and tackled after the catch. That was the top of what was about a week’s worth of highlight reel plays for McMillan.

At 6-foot-3, 185 pounds, McMillan plays like he’s 6-foot-8, towering over opposing defensive backs and able to make a play on virtually any ball thrown his way. His body control and ability to go get the ball and catch it cleanly is truly special. He also somehow plays like he’s a 5-foot-8 slot receiver, able to change speeds quickly and get in and out of breaks with ease. Seven-on-seven is a different sport than full pad fall football, and it’s always important to keep that in mind when watching passing tournaments and projecting players, but McMillan has done it in pads as well. It looks like he’ll be a force in the Trinity League this fall and it’s easy to see why he’s such a top target for USC and several other teams. Arizona and Oregon both recently hosted him on official visits, but the Trojans have had him on campus as well during June. He’s a volleyball player and USC has said he’ll have an opportunity to play both sports in college. The Trojans are chasing him and he’s a guy who might be able to contribute quickly at the next level.

He took on the challenge of going both ways and recorded at least three interceptions on defense. His combination of smarts and athleticism allows him to play cornerback where he can freelance a bit because he seemed to understand what was coming at the snap. Of course, it also helped that opposing quarterbacks never even glanced his way on a majority of plays and he shut down one side of the field just by standing out there.

Another standout USC target was 2023 athlete Makai Lemon (Los Alamitos, Calif./Los Alamitos), who played cornerback and wide receiver. He’s one of those prospects where his future appears to be brighter at whatever position he’s playing in that moment. When he takes snaps at cornerback, he’s so trusting of his athleticism that he can play fast and fluidly and it looks like sticking at that spot might turn him into a truly elite corner. Then he flips over to wide receiver and his speed and instincts make him such a weapon there that you wonder how you can possibly take the ball out of his hands. There are going to be battles on college campuses about which position Lemon fits best, but he’ll make that decision much easier because he’s set on playing offense in college. A five-star prospect and No. 20 overall recruit in the 2023 class, Lemon is another must-get for USC in that class. He’ll get pulled by teammate and good friend Malachi Nelson, who is set to commit in mid-July with Oklahoma and USC both involved, but Lemon has a strong connection to the USC staff and said he’ll do his own recruitment not connected to Nelson’s.