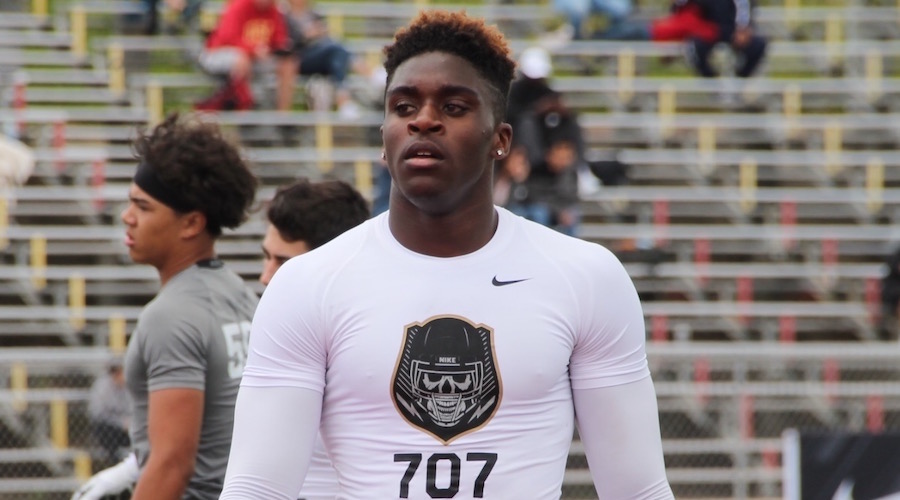 With a look of determination in his eyes as he walked onto the football field at De Anza High School in El Sobrante, California just prior to The Opening Oakland Regional on Sunday morning, it was apparent that highly regarded Class of 2017 cornerback Jaylon Johnson was on a mission.

“I have a lot to prove to the doubters,” Johnson said.

Putting on a one-man show over the course of the next four hours, Johnson would accomplish precisely what he set out to do, and then some.

Not only did the Fresno (Calif.) Central star come away with defensive back MVP honors, he earned the highest SPARQ Rating (132.42) of the day, he won the fastest man competition with a 4.49 forty-yard-dash, and most significantly, he landed a golden ticket to The Opening Finals, set to take place in Beaverton, Oregon in early July.

“To be honest, this was a blessing from God,” said Johnson following his impressive performance. “I’ve always watched The Opening and I’ve always wanted to be there, and to actually have it in my hands now, and to be able to go, it’s just a great feeling.”

Bringing 6-foot, 180-pound size to the table to go along with the outstanding speed and cover skills that he put on full display on Sunday, it’s no wonder that Johnson has been drawing a whole host of college coaches to the Central campus this month on a daily basis.

“A lot of schools have come by,” said Johnson, who currently holds 13 total offers. “SC has come by a couple times, Cal, Florida, Arizona, Arizona State…really all of the schools that I have offers from. Recently Alabama came by my school. I definitely like what’s going on right now.”

The Trojans staff extended an offer to Johnson this past February, and they’ve been hot on his heels ever since. In fact, when asked to name the programs that have been recruiting him the hardest, Johnson didn’t hesitate to mention USC first.

“Definitely SC,” Johnson said, “and I’m talking to Arizona more and more. I talk to those two schools the most.”

Intent on taking his time with the recruiting process, Johnson is nowhere near narrowing things down or naming a top 5. He did note, however, that he does have legitimate interest in the Trojans.

“I definitely like the program there,” Johnson said. “There’s a lot of history, Hall of Fame players and all of those kinds of things. I know I can get to the NFL from there. I like what I see.”

In a sign reflecting that interest, Johnson took his lone unofficial visit of the spring to USC in late March on a day when the Trojans held a spring practice session in the Coliseum, and the experience left a lasting impression.

“It was definitely a shock, walking down the tunnel and seeing all of the past players on the wall and everything like that,” Johnson said. “I normally see it on T.V., but to see that in person was really good. I talked to [Head Coach Clay] Helton and [Defensive Backs Coach Ronnie] Bradford. They’re good guys, and I enjoy talking to them.”

It’s Bradford, in particular, whom Johnson has started to develop a bond with over the last few months.

“I talk to Coach Bradford the most from SC,” Johnson said. “I talk to him once or twice a week. We have a good relationship. We don’t always talk about football or recruiting. Sometimes we just have regular conversations, so it’s always good to speak with him.”

From the coaching staff, to the history of the football program, to the depth chart, Johnson certainly sees plenty of positives when looking at USC, but with the coveted corner still open to all comers, Bradford and Co. figure to have a lengthy battle on their hands as they attempt to land his signature.

“I’m going to go through the whole recruiting process,” Johnson said. “I’m going to wait until Signing Day, and I’m going to take all of my official visits. I’m still wide-open. I’m still just trying to get as many offers as I can, and then I’ll look at where I am.”

Interestingly, one program that is not currently heavily in the mix is UCLA, where Johnson’s brother, Johnny, plays.

In addition to his five officials, Johnson hopes to take some more unofficial visits this summer, although he’s unsure where to at this point. A return-trip to USC for the Rising Stars Camp is also a possibility.