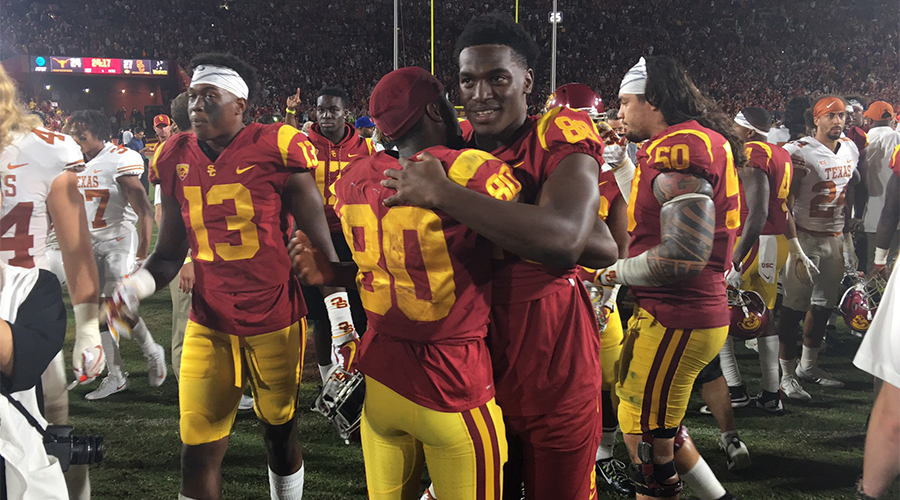 Facing each other for the first time since their epic 2006 National Championship Rose Bowl game, Saturday night’s clash between USC and Texas didn’t match that previous contest in terms of style, but, once again, there were certainly plenty of late-game fireworks, and fortunately for Clay Helton and Co., this time around the Trojans came away with a victory –  thanks to freshman placekicker Chase McGrath, who drilled a 43-yard field goal in double-overtime to give USC the 27-24 win.

The first portion of the game was marked by a standout Trojans defense that limited Texas to just one yard rushing in the first half, but also an out-of-sync USC offensive group that failed to put any points on the board despite possessing excellent field position throughout the first quarter.

Following a botched punt by Texas’ Michael Dixon that gave USC the ball on the Longhorns 37-yard-line, however, the Trojans offense finally came through in the second quarter when Sam Darnold found a diving Deontay Burnett in the back of the end zone for a 15-yard touchdown to give the Trojans a 7-0 lead.

But that initial lead was short-lived. With the Trojans attempting to mount a late drive just before halftime, Darnold’s pass went through the hands of Jalen Greene, with DeShon Elliott reeling in the deflection and returning it 38 yards for a touchdown to tie the game up.

The Trojans weren’t quite ready to pack it in for the break, however, and on the last play of the second quarter Darnold scrambled and found Ronald Jones II over the middle, before the McKinney, Texas native darted down the field, picking up a key block by Steven Mitchell on his way to a 56-yard touchdown that gave USC a 14-7 lead at halftime.

Texas would answer on its first offensive series of the second half, putting together a 12-play, 54-yard drive that resulted in 39-yard Joshua Rowland field goal that cut the Trojans’ lead to four.

And the Longhorns weren’t done. After a previous drive into USC territory mid-way through the fourth quarter was undone by a Marvell Tell interception, Sam Ehlinger engineered a 14-play, 91-yard drive that he capped with a 17-yard touchdown pass to Armanti Foreman that gave Texas a 17-14 lead with only 45 seconds left in the game.

But that was enough time for Darnold and Co. That redshirt-sophomore passer got USC in position to attempt a 37-yard field goal, which McGrath was successful on as time expired.

In the first overtime, Darnold hit Burnett on USC’s very first offensive play for a 25-yard score to give the Trojans a 24-17 lead.

Texas answered yet again, however, with Ehlinger finding a wide-open Cade Brewer for a three-yard touchdown to tie it up at 24-24.

But the second overtime would be all USC.

With the Longhorns sitting at the USC three-yard-line, Ehlinger fumbled, and Ajene Harris recovered the ball, ending Texas’ offensive series.

The Trojans were able to pick up just one yard on a run by Jones on their next offense opportunity, but that was enough for McGrath, who was swarmed by his teammates following his game winner.

Sam Darnold finished 28 of 49 passing for 397 yards and three touchdowns with two interceptions. Burnett was his leading receiver, compiling 8 receptions for 123 yards and two touchdowns.

For the Longhorns, Ehlinger completed 21 of 40 passes for 298 yards and two touchdowns with two interceptions.

USC outgained Texas 468 – 366, with the defense holding the Longhorns to a total of just 68 yards rushing – one week after they amassed over 400 yards on the ground against San Jose State.

Cameron Smith and Uchenna Nwosu tied for the team-lead in tackles with nine each, and Porter Gustin, who had surgery on his toe on Wednesday, paced the Trojans with two sacks in one half of play.

The Trojans, who improve to 3-0, will next play Cal at Berkeley on Saturday.