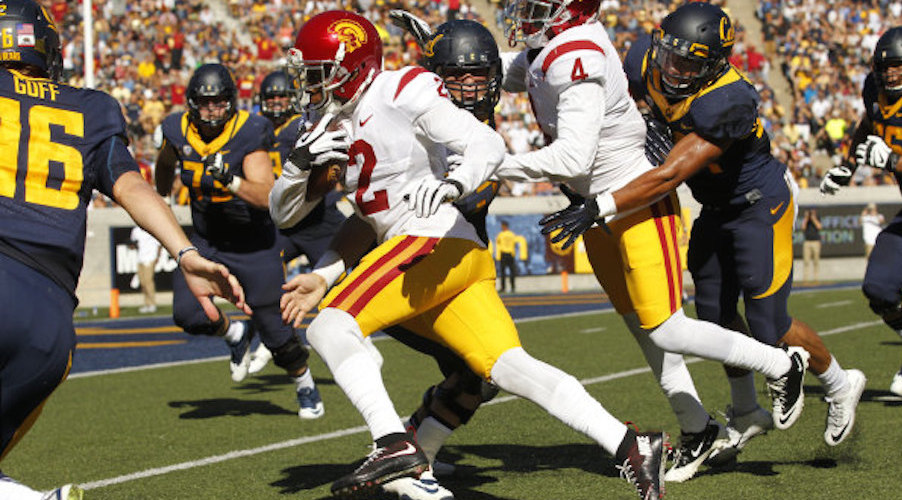 The Trojans came up with their second consecutive victory under USC interim head coach Clay Helton on Saturday afternoon, defeating Cal by a final score of 27-21 in Berkeley (Calif.).

The win didn’t come without its fair share of drama, however, with the Trojans surging out to a 17-point lead early in the third quarter, and then holding off a feisty Golden Bears team down the stretch.

In a battle between two high-profile quarterbacks, USC’s Cody Kessler and Cal’s Jared Goff were both remarkably efficient early, with both players completing 11-of-14 passes each in the first half, but there was a noticeable lack of explosive plays in those first two quarters, and the Trojans led 10-7 at halftime in a surprisingly low-scoring affair.

But USC seized momentum in a big way on the team’s first possession of the third quarter, with Kessler and the Trojans offense putting together a beautiful 13-play, 67-yard touchdown drive that was capped by Tre Madden’s two-yard touchdown run on fourth down.

It was the USC defense’s turn to shine on Cal’s ensuing drive, with Adoree’ Jackson picking off a Goff pass attempt and taking it back 46-yards for a touchdown to give the Trojans a 24-7 lead. The interception was the first of Jackson’s Trojans career, and one of three total takeaways for the USC defense on the day.

But Cal fought back, making it a 24-14 game with Daniel Lasco’s six-yard touchdown run in the third quarter, and then, following Alex Wood’s second field goal of the game for USC, Goff hit Stephen Anderson with a nine-yard touchdown pass, and the Golden Bears trailed 27-21 with under four minutes remaining in the contest.

The USC offense made a real statement on the Trojans’ final drive, however, running out the clock with a physical rushing attack that featured two pivotal plays by running backs. First, Madden picked up 14 yards on a 3rd-and-1 where he was stopped at the line, and then bounced outside to pick up the first down. Justin Davis put the final nail in the coffin soon after that, picking up seven yards on a 3rd-and-5.

Kessler finished 18-of-22 for 186 passing yards, while his counterpart, Goff, was 23-of-31 for 272 yards with two touchdowns, but also two interceptions.

USC running back Ronald Jones II led the Trojans with 80 yards rushing on 11 carries, and had a 13-yard touchdown run in the second quarter.

Trojans wide receiver JuJu Smith-Schuster, who had five catches for 55 yards, was held out of action late in the game due to a fracture in his hand.

The Trojans will next face Arizona next Saturday in the Coliseum.