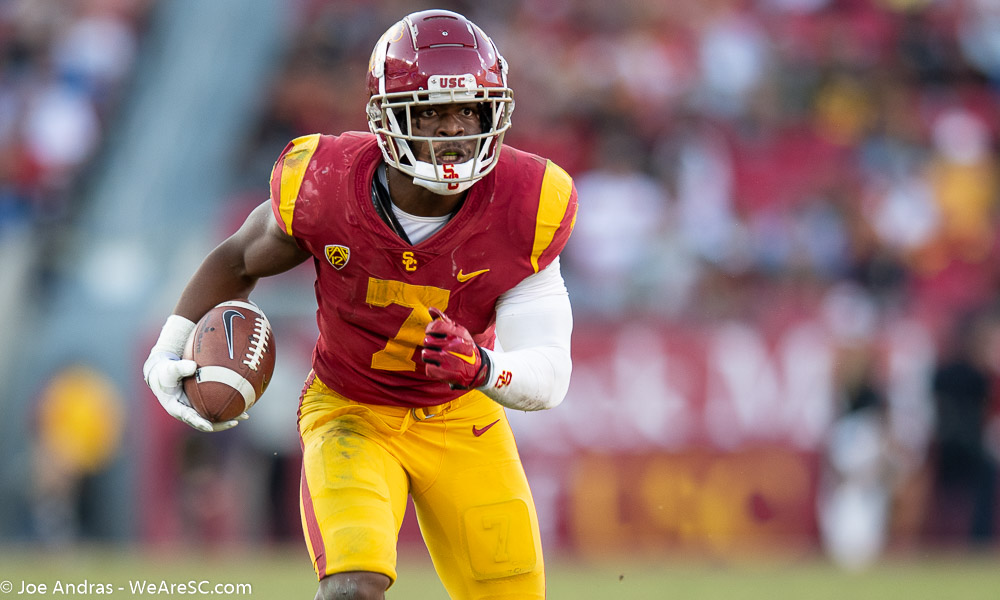 It’s no secret that the USC offense will go as far as quarterback Kedon Slovis takes it this year. But a talented group of tailbacks sure could make life easier on the sophomore quarterback.

The 2019 season was an odd one for the USC tailback position. With two veterans in Vavae Malepeai and Stephen Carr, and a promising redshirt freshman in Markese Stepp, the spot looked loaded and ready to come to the aid of a true freshman quarterback forced to step in and take over the offense in the first half of the first game of the season.

Instead, the running game never really got going consistently for the Trojans, as tailbacks yo-yoed in and out of the lineup due to injuries. Carr missed three full games, Malepeai missed five, and Stepp missed the final seven.

“I’ve never seen anything like it,” running back coach Mike Jinks said of the injuries that decimated the position.

Heading into this past spring-ball-that-wasn’t, no position was likely to see fewer answers to questions than tailback. Malepeai and Stepp were set to miss all of spring ball as they continued to rehab from injury, and Kenan Christon was to miss as he spent the spring with the track team. That left USC and Jinks with just Carr and Quincy Jountti as scholarship tailbacks available for spring ball. With tailbacks on a rep count similar to Slovis being on a pitch count, the position was going to be bolstered by walk-on linebackers Grant Jones and Peter Esparza.

With spring ball canceled, perhaps no offensive player suffered more disappointment than Carr, as he was healthy and had a chance to establish himself as the lead back.

“He was so excited about spring because he was going to get a majority of the touches and maybe an opportunity to separate himself,” Jinks said. “He’s been working hard. I thought toward the end of the year, once he got back from the hamstring injury, he started getting a little confidence back.”

There are still plenty of questions as to what Carr’s ceiling is as a back. He’s dealt with a number of injuries during his USC career and has also split carries constantly. He has only 218 carries in three years, which is fewer than three Pac-12 tailbacks logged just last season.

Carr said he felt fully healthy going into the spring, and while he wasn’t worried about establishing himself as “the guy” over those 15 practices, he was as ready as ever to hit the field for his final spring ball.

“I felt really good. My ankle healed up well,” Carr said before catching and correcting himself that it was a hamstring injury he was healed from. “That’s how many injuries I’ve had. But I felt like I was in a good place and having a great spring.”

There have been many years over the past few decades where it’s been said that USC boasts multiple tailbacks who could start at a number of other Pac-12 programs.

“Our running back room is something special,” Carr said. “With all the injuries happening, last season showed all our running backs are able to get the job done. We all can be treated as starting backs.”

This will be another of those years, but there is plenty of “prove it” that comes along with that in 2020. USC rushed for just 118 yards per game in 2019, good for 116th in the nation and well behind even the 154 yards per game Graham Harrell’s North Texas offense ran for in 2018. But the talent is clearly there.

Malepeai rushed for 272 yards and four touchdowns through the first three games of the season and fought through several more games before undergoing knee surgery.

“Against Fresno State, against Stanford, it looked like he was about to be the guy that could have a 1,000-yard year,” Jinks said of Malepeai. “He was ready to take on that role.”

Stepp had just 48 carries last season before going down with an ankle injury against Arizona. But there was a clear trend, as he posted 3, 10, 10 and 13 carries in his final four games.

“I think we all kind of figured out what was happening there,” Jinks said of Stepp coming into his own. “He was a force.”

With those three down, in stepped true freshman Kenan Christon, who played in seven games despite entering the season as a clear redshirt option. But Christon logged games of 14, 15 and 20 carries–only Malepeai’s 23 carries against Fresno State and BYU were more for a USC tailback last year–as he averaged 5.5 yards per carry on the year and was dynamic out of the backfield with 11 receptions for 126 yards and three touchdowns.

The running game is going to play a part in this offense, but it’s clear how much the passing game will be relied on. The ability to pass protect is a huge factor when it comes to playing time, and every tailback knows that.

“If you can’t protect, you can’t play,” Jinks said, adding that two meetings a week right now are dedicated to protections.

It was clear last season that Jinks was slightly apprehensive about throwing Christon in there and making him partly responsible for Slovis’ wellbeing. But Christon responded well, and that earned him plenty of confidence from Jinks.

“I was blown away with his aptitude,” Jink said. “He was listening in those meetings.”

Where Christon struggled was later in the season–against Cal specifically–when defenses blitzed the protection and focused solely on running through the 175-pound true freshman. Luckily for USC, that was around the time Carr was coming back from his injury and was able to take on some of that responsibility. It also gave Christon a clear look at how defenses will attack him until he can prove effective against it.

The expectation this year is for the running backs to literally hit the ground running, as–provided there are no setbacks–all four should be healthy and ready to go whenever fall camp gets started. Jinks said it typically takes until some time in Year 2 for the switch to flip in terms of a complete understanding of this offense. But that wasn’t the case for this group, along with Slovis and the entire offense.

“It was from that Notre Dame game on,” Jinks said of when the switch flipped for the Trojans. “It started and ended with the quarterback. He saw it, and things slowed down for him.”

Carr said he’s fully comfortable with the offense, and has been spending time this offseason working on learning all the routes for the wide receivers, so he can fully grasp field awareness and an understanding of where everybody will be on a certain play. Carr said a few players are still close enough in the area that they’ve been able to continue working out. He said the group, which consists of Tyler Vaughns, Hunter Echols, Greg Johnson, Isaiah Pola-Mao, Josh Falo and Chase Williams, have kept each other accountable in their preparation for this season.

This will be Carr’s final season at USC, and the senior hopes to go out with a bang. Though he isn’t focused on anything but today.

“I want to embrace the day-by-day journey,” Carr said of what he’s looking for in this final year. “And I want to make sure I leave a great impact on my teammates this year, in leading them the right way.”

Lately, momentum has been building toward the idea that the 2020 season will be played, though there is nothing confirmed at this point and likely there will at least be tweaks to attendance policies.

Carr understands that the players can’t do anything about decisions dealing with starting practice or how the season will be handled. Right now he can only focus on one thing.

“The only thing on my mind about the situation is to be ready when we get back,” Carr said. “Make sure you’re ready when you get back.”

It doesn’t take a long look at the scheduled to start thinking about possibilities for that first game, as USC is scheduled to take on Alabama at AT&T Stadium in Arlington, Texas. That game would be a massive and immediate test for this group, as well as the entire USC offense, team and program.

“There’s a buzz,” Jinks said of the program getting prepared to face the Crimson Tide. “Everybody is excited. You want to play the best. They’ve been at that defensive level for a while. We’ve studied some teams that have given them some troubles and we have the potential of having that kind of firepower.”