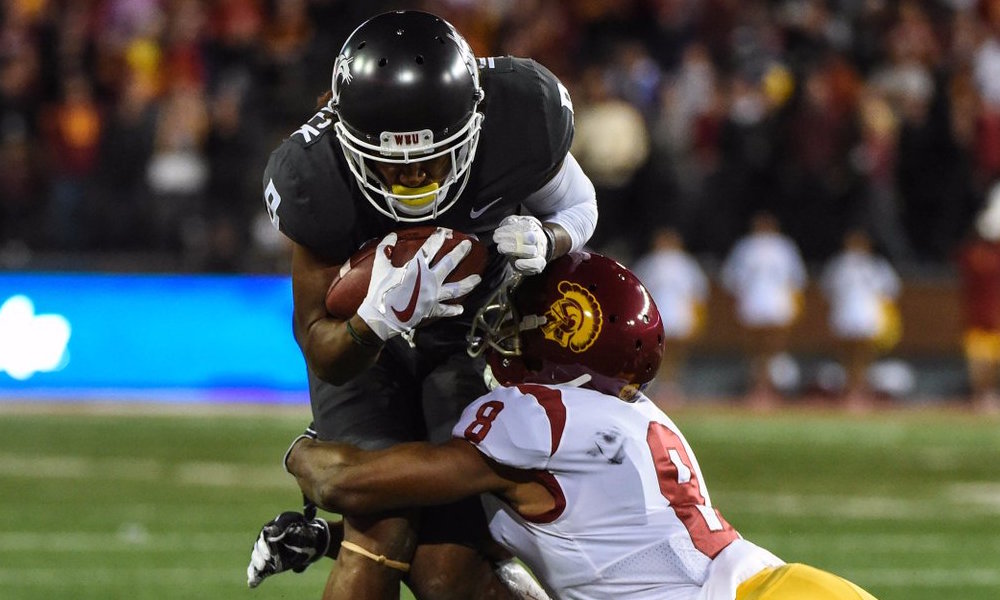 For the first time this season, Sam Darnold and the Trojans just couldn’t pull out a victory in the end. Having flirted with disaster in three of their first four contests this season, No. 5 USC finally went down in defeat on Friday, falling to fellow-unbeaten and No. 16-ranked Washington State in Pullman by a final score of 30-27.

Things actually looked promising for the Trojans from the initial outset. Down 3-0, Darnold engineered a beautiful 10-play 75-yard drive, which he capped with a four-yard touchdown run on USC’s first offensive drive of the day.

But as has been the trend, the USC offense struggled throughout much of the remainder of the contest, with the unit failing to convert two key red zone opportunities into touchdowns.

Having a noticeable impact was the inconsistent play up front from an offensive line group that was without left tackle Toa Lobendahn due to a skin infection, and that lost two more starters over the course of the game in right tackle Chuma Edoga and right guard Viane Talamaivao.

That, combined with some curious playcalling at times, not to mention the fact that a Trojans defensive unit that fought valiantly for much of the night, appeared to simply run out of gas at the end, ultimately spelled doom for Clay Helton’s squad.

Washington State took a 10-7 lead early in the second quarter when Luke Falk hit Tavares Martin Jr. with a quick pass outside, which he took 28-yards for a touchdown.

The Trojans would answer in a hurry, however, with tailback Ronald Jones II bursting down the right sideline for an 86-yard touchdown run to put USC back in front, 14-10.

Not long afterwards, the Trojans had a golden opportunity to really seize control of the game when Uchenna Nwosu tipped a Falk pass attempt up into the air at the line of scrimmage, with the veteran outside linebacker pulling the ball in for an interception after it bounced off of a Cougars offensive lineman, giving USC the ball at the WSU three-yard line. But the Trojans offense was able to pick up just one yard on three plays, and they had to settle for a 20-yard Chase McGrath field goal that gave USC a 17-10 lead.

That’s how it would remain until just before the end of the half, as Falk led a 12-play, 94-yard drive that Jamal Morrow finished with a one-yard touchdown plunge to make it a 17-17 tie at halftime.

After WSU’s Erik Powell added his second field goal of the day, the Trojans received what looked like another great opportunity when the USC offense got the ball on the Cougars’ 27-yard-line thanks to a botched punt. But again, the offense failed to capitalize with a touchdown, moving the ball just 16 yards on five plays, forcing USC to settle for another McGrath field goal to tie the game up at 20-20.

Washington State jumped back in front early in the fourth quarter when Morrow would take a short shovel pass from Falk before darting into the end zone for a 23-yard touchdown, putting the Cougars in front by seven.

Darnold and Co. would respond, however, with the redshirt-sophomore passer converting a huge fourth-and-13 play as he hit Tyler Vaughns for a 15-yard gain for a first down. Three plays later Darnold ran into the end zone from the two-yard line to make it a 27-27 game.

But the rest of the contest was all Washington State. The Cougars put together an eight-play, 60-yard drive on their next possession that resulted in a Powell 32-yard field, with a 35-yard run by Morrow serving as the key play on the series.

The Trojans still had one more chance, as they got the ball back with 1:40 left in the game. But on just the second play of the drive Jahad Woods forced Darnold to fumble, with Nate DeRider making the recovery.

Darnold completed 15 of 29 passes for just 164 yards – the lowest of his career as a Trojans starter. He also threw one interception.

Falk, meanwhile, completed 34 of 51 passes for 340 yards and two touchdowns with one interception.

Jones II ran for 128 yards on 14 carries, although 86 of those yards came on his touchdown run, and as a team the Trojans ran for a total of 168 yards.