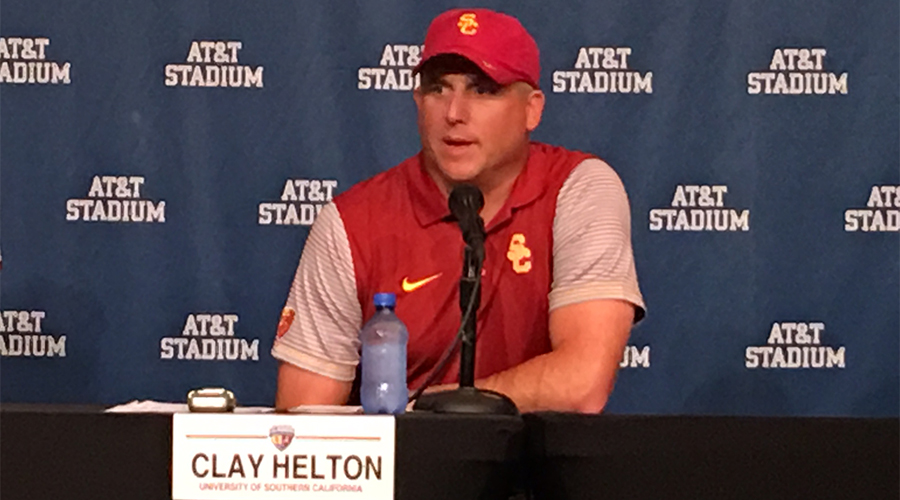 After a promising enough start, things went south in a hurry for No. 20 USC in their season-opening matchup with No. 1 Alabama on Saturday night, with the Crimson Tide running away with a 52-6 blowout victory inside Arlington’s (Texas) AT&T Stadium.

Clay Helton’s team showed some fight initially, with Max Browne directing the USC offense 44 yards down the field on a game-opening drive that was capped off by a 47-yard Matt Boermeester field goal, giving the Trojans a quick 3-0 lead.

Thanks to a stout effort by the USC defense early, the score would stay that way until mid-way through the second quarter when Crimson Tide freshman quarterback Jalen Hurts, who came in on relief in place of Blake Barnett in the first quarter, hit ArDarius Stewart for a 37-yard touchdown.

That was the beginning of the end for USC, as an Alabama offense engineered by former Trojans head coach Lane Kiffin scored 38 consecutive points.

With the Trojans offensive line struggling mightily against Alabama’s defensive front, and USC unable to mount any kind of rushing or passing attack, Clancy Pendergast’s defensive unit was on the field early and often from the get-go, and they eventually wore down.

Alabama took a 17-3 lead into halftime before really breaking things open early in the third quarter.

Following a 71-yard touchdown pass from Hurts to Stewart, USC punter Chris Tilbey dropped the snap on a punt attempt before falling on the ball, giving Alabama possession at the Trojans 13-yard-line. Hurts made USC pay four plays later, rushing into the end zone from seven yards out to give the Crimson Tide a commanding 31-3 lead.

Hurts, who completed 6 of 11 passes for 118 yards and two touchdowns with one interception (Iman Marshall), would add one more rushing touchdown later in the same quarter.

For USC, Max Browne began the night by completing his first seven passes, but he wound up just 14-of-29 for 101 yards with one interception. Redshirt-freshman Sam Darnold also saw some time at quarterback for the Trojans, completing 4 of 8 passes for 29 yards.

The Trojans were held to six yards rushing in the first half, and finished with a modest total of 64 yards on the ground. Alabama, meanwhile, racked up 223 rushing yards, with Damien Harris accounting for 138 of those on just nine carries.

Boermeester accounted for all six of the Trojans’ points. In addition to his early field goal, he also connected on a 41-yard attempt late in the third quarter.

The Trojans committed six penalties for 46 yards, the most costly of which occurred in the second quarter when outside linebacker Jabari Ruffin was ejected after stomping on an Alabama player.