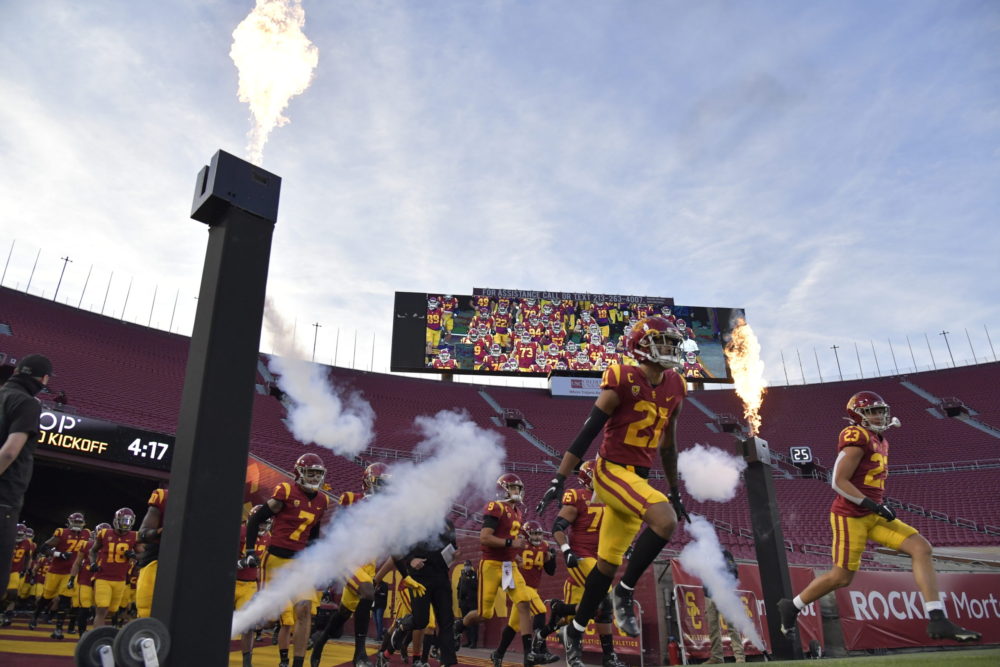 Those are the high school locations where seven of USC’s 11 coaches attended, giving this staff an undeniable Texas twang. Several more Texas additions were made this off-season as two new quality control analysts have deep ties to the state. Bryan Carringon served as the Director of Recruiting for the Texas Longhorns, while John Bonney was a defensive back at Texas and Texas Tech.

Those connections to Texas have manifested in USC offering a significant number of Lone Star State prep prospects in the 2021, 2022 and 2023 classes. The Trojans landed two Texas linemen in the 2020 class, in Courtland Ford and Casey Collier. USC signed four prep prospects from Texas in the 2021 class, in offensive lineman Ty Buchanan, tight end Lake McRee, wide receiver Joseph Manjack IV and running back Brandon Campbell, and also brought in Colorado transfer wide receiver K.D. Nixon and Texas transfers in running back Keaontay Ingram safety Xavion Alford, who all played high school football in Texas. In the 2022 class, USC holds a commitment from linebacker Ty Kana, of Katy, Texas, and the Trojan seemingly don’t go more than a few days without extending an offer to a Texas prospect.

On the surface, the visibility of the connections between USC coaches and staffers and the state, as well as the recruiting activity, seems to fly in the face of USC’s “Take Back the West” recruiting strategy. USC coaches have been vocal about wanting to get back to the top of the Pac-12 and to do that by locking down the top recruits from Southern California specifically, all of California generally, and the entire West region, ultimately.

USC is going to fight the perception that the coaches have eyes for Texas, as plenty of Pac-12 rivals know their path to success in this conference is by prying as many elite Southern California prospects away from USC as possible. And to this point, this staff has done a tremendous job in balancing the natural inclination to recruit a state that is so familiar to so many of them, with the understood need to be the only destination for West region standouts.

One year after signing just one of California’s top 29 prospects, USC’s 2021 class — the first class recruited by the current staff — featured 11 of the top 29 California prospects, including four of the top eight, and the nation’s No. 1 overall prospect in Korey Foreman. USC also hit the ground running in the 2022 class, getting an early commitment from California’s top overall prospect, and top-five national prospect, cornerback Domani Jackson.

Texas might be a fertile recruiting ground, but it’s not where USC coaches’ eyes go first.

“That is certainly not our goal,” safeties coach Craig Naivar, the ‘Taylor, Texas’ portion of the opening paragraph, said of putting a major emphasis on recruiting Texas. “Our goal is to take back the West and recruit the state of California. That’s priority one, two and three, is to get the young men on the West Coast first.”

What’s become crystal clear over the past 14 months is that with the resources being poured into the football program, and the recruiting aspect specifically, this is no longer an either/or situation where focus in one area significantly takes away focus and production from another.

Despite so many assistants having strong Texas ties, the USC stable of eligible recruiters is very well plugged into West region recruiting. Assistant coaches Donte Williams and Keary Colbert attended Culver City and Hueneme High Schools, respectively. Vic So’oto is from San Diego and played at BYU. Viane Talamaivao, Toa Lobendahn, Lenny Vandermade and Michael Hutchings were all in-state products and bring the knowledge and experience of having played at USC. New Director of Recruiting Strategy Marshall Cherrington attended USC and has helped guide Cal to back-to-back impressive classes, and Director of High School Relations Armond Hawkins Jr. played at Rancho Cucamonga and is very familiar with the recruiting scene in the region. Beyond, those coaches with Texas ties did a little bit more than just okay in the West region in the 2021 class. Naivar helped sign the top two athletes and No. 1 safety in California for his safety group. Defensive coordinator Todd Orlando, who coached at Houston and Texas, helped land Julien Simon and Raesjon Davis. Offensive coordinator Graham Harrell and new tight ends coach Seth Doege brought in quarterbacks Miller Moss and Jaxson Dart.

USC’s brand is a national one, and the coaches know that while they can build a very good class by keeping all the top regional prospects home, there are gaps that can be filled by recruits from other regions. So’oto gives USC someone who has experience recruiting the DMV region from his time at Virginia, the Trojans have been active in Georgia, and new Director of Scouting and Player Relations Jeff Martin’s time at LSU should provide the Trojans with new connections in Louisiana and throughout the Southeast.

But Texas will remain recruiting grounds for the Trojans, and it’s a state that typically produces an abundance of offensive linemen, defensive linemen, linebackers and running backs — three positions that can sometimes be scarce when looking at the list of top California prospects.

“The Texas part of it is an easy deal for us because of so many relationships we have there and of people you can trust,” Naivar said. “So if we do have a need that cannot be met on the west coast, we have that option to go out there and do that.”

Naivar said USC’s reputation as an academic institution and a traditional football power makes it easier to begin recruiting prospects.

“USC is a national brand,” Naivar said. “It’s not a regional brand. You can recruit nationally, and it goes back to that academic and athletic reputation, that when a young man sees Southern Cal, they know everything right then and there. You don’t have to give a presentation of, wait, who are you and where’s that located? What conference again?”

But Naivar added that just showing up in a USC logo and pointing toward Los Angeles isn’t enough to get Texas prospects interested, nor prospects from anywhere in the country. And that’s sometimes how blue blood programs allow their recruiting to run dry.

“This is USC, but you can’t rely on the logo and tradition to go recruit guys,” he said. “You have to work your butt off, build relationships, get on guys young and stay on them.”

Naivar is a big reason that Alford is at USC now, as that recruiting relationship was strong enough that when Alford wanted to look at his options outside of Texas, USC and Naivar were his choice.

Christian White, known as Coach Flight, is a defensive back and linebacker skills and performance coach in Texas, and founder of the Texas Flex 7 on 7 team. He’s seen Naivar’s recruiting work up close and doesn’t seem surprised at all that he’s continuing to have an impact in the state and has found success recruiting to USC.

“He relates very well to the people,” White said of Naivar. “When he was recruiting kids at Texas, he was going to baseball games or watching basketball games. He’s really laid back and not uptight. Some guys let it be known that they’re just getting paid to do it, but he enjoys recruiting. Even if you don’t choose USC, he’ll still keep in touch with you. He leaves an impact. Every kid he’s recruited that I train has nothing but great things to say.”

White said how Naivar has interacted with his trainees in the past makes him more likely to send information about potential future standouts his way.

“It’s easy when you’re dealing with a guy like him,” White said. “If you give him a fair shot and he gets a hat on the table, he thinks he can pull in any kid in the country.”

Vick Machado, assistant coach for FAST Houston, one of the premier 7 on 7 programs in the country, said he’s seen the USC effect on several of his players. The group visited USC a few years ago while in Los Angeles for a tournament. That started the relationship with one-time USC 2021 commitment Quay Davis, as well as Alford and cornerback Dwight McGlothern, a top USC target in 2020 who ultimately chose LSU over USC late in the process.

With a roughly three hour flight from either Houston or Dallas to Los Angeles, compared to a two or three hour drive to the campuses of the bigger Texas schools, the travel to USC for Texas prospects isn’t all that daunting. And by the time they’re ready to commit to a school, most are familiar with it.

“I guess it’s part of social media and I think it’s 7 on 7, too,” Machado said. “The top kids are traveling in high school so much that whenever they think of going off to college, it’s not too crazy. They’ve been in LA three times playing in tournaments. Back in the day, they were thinking, I have to go across the country? I’ve never been anywhere before…I’m big on kids going to see the world.”

And Naivar — and the rest of the staff recruiting Texas — is going to get a huge boost from Carrington, who developed deep ties to the state, but is another addition to the recruiting staff who is comfortable building relationships with prospects anywhere in the country.

“He’s a good dude,” Machado said. “He relates to the kids. That’s the No. 1 thing. He’s younger, and they buy in. I wouldn’t doubt if [they] could get four to seven Texas kids every year, at least.”

When it comes to recruiting, just about everything starts and ultimately hinges on the relationships that coaches and staffers are able to build throughout the process. Over the past year or so, USC has finally started catching up to the elite recruiting programs in terms of resources in the department, skill in the process and dedication to the recruiting trail. With USC embracing the charge toward NIL rights and recruits enamored by their earnings potential in that regard at USC, winning big on the field is the next piece that can truly push the Trojans back into the top tier of recruiting programs, alongside Alabama, Ohio State and very few other programs. Ultimately, those will be classes that start in the West, and are dominated by the top California prospects, but will likely have some Texas flavor sprinkled in.