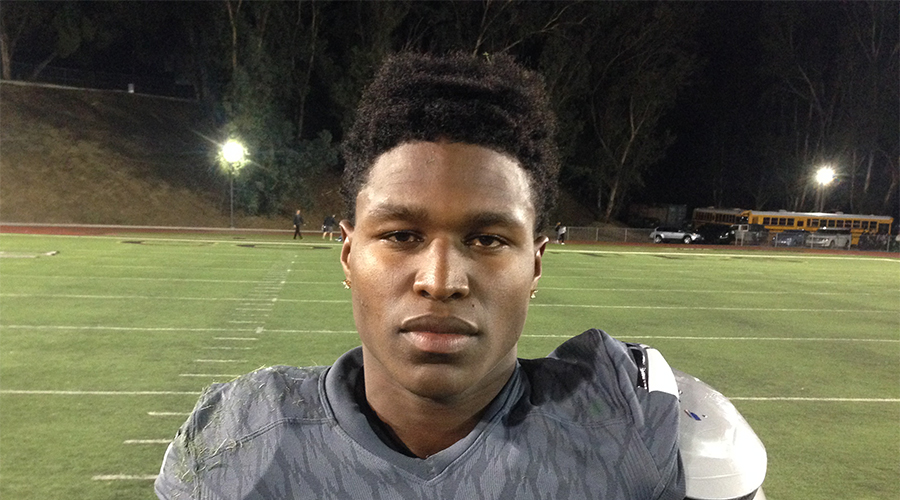 With two-way Class of 2017 star Darnay Holmes leading the way, a loaded Calabasas team had cruised through their schedule with relative ease heading into the team’s regular season finale this past Friday night, with the Coyotes beating their opponents by an average of 24.8 points per game.

Facing a tough Moorpark team that still had aspirations of grabbing a piece of the Camino League title themselves, however, Calabasas found themselves pushed to the limits in the contest. But thanks in part to three touchdowns by the dynamic Holmes – two of which came on receptions, with another coming on a long return on a fumble recovery – the Coyotes defeated Moorpark by a final score of 42-35, becoming the first team in the history of the school to finish the regular season undefeated.

With more tough opponents on the horizon, Holmes said afterwards that he believes that the tightly contested matchup could be just what the doctor ordered for Calabasas as they gear up for the playoffs, which begin this week with the Coyotes set to take on Studio City (Calif.) Harvard-Westlake on Friday.

“It’s just a blessing to be 10-0 right now, but we definitely have to condition ourselves and be ready to get in dogfights like this,” said Holmes, who shined in the victory at cornerback, wide receiver and as a return man on special teams. “At the end of the day we’re going to have a close game, and today was the day we had a close game, so from here on out we’re going to come out with a different intensity and a different swagger, and they’re going to know who we are from now on.”

One of the most sought-after cornerback prospects in the entire nation, Holmes has kept his recruitment close to his vest throughout the process, and while nothing has changed in that regard, following the victory he did reveal that he’s started to set up some official visits.

A number of other programs are also still in play and under consideration for one of Holmes’ three remaining official visits, including UCLA, Miami (Fla.), Michigan State, Nebraska as well as USC – a school that really didn’t become heavily involved with the elite talent until midway through the summer due to some initial uncertainty on his part concerning the coaching change.

“Yeah, they could be,” said Holmes when asked if the Trojans could be in line to land one of his officials. “That’s all still up in the air.”

With the Trojans still likely to want to add at least one more cornerback, if not two, on top of current USC pledge Wylan Free (Lynwood, Calif./Lynwood), and with another big-time target, Jaylon Johnson (Fresno, Calif./Central), having committed to Utah recently, it’s safe to say that USC head coach Clay Helton and staff have made it known to Holmes that he is a high priority recruit for them.

“Bookie [Radley-Hiles] and I actually talked to Coach Helton a few nights ago, and it was a great conversation,” Holmes said. “They want us to come down, but our schedule is just too busy right now. But at the end of the day they have great coaches over there, they’ve turned the ship around, Adoree’ [Jackson] is doing great, all of my friends there are doing great, so I like what’s going on there.”

Targeted by USC as somewhat of an athlete to assume a role similar to the one that Jackson currently fills for the Trojans, he’s been in near constant contact with the staff since he took an unofficial visit to the school this past June.

“I hear the most from [High School Relations Coordinator] Gavin [Morris],” Holmes said. “I also talk to [Defensive Backs] Coach [Ronnie] Bradford and the whole staff over there. Whenever I get on Facetime with them, the whole staff gets on, so it’s really a family over there.”

While it’s too early to tell just what kind of chance the Trojans realistically have in the Holmes sweepstakes, one thing that could help to at least keep them in the discussion until the end is the fact that the No. 1 factor that he’s looking at is academics, and specifically, each program’s business school – something USC is known for.

“I really don’t care about the football side of it, because at the end of the day you can’t play football for your entire life, so I want to have a good degree,” Holmes said. “I plan on majoring in business and finance.”

On pace to graduate high school early and to enroll at the school of his choice as a mid-year enrollee, Holmes will announce his decision on Jan. 7 during the U.S. Army All-American Bowl.

For the moment, however, recruiting is taking a backseat to the season at hand, as Holmes and his Calabasas teammates try to make a run at a state title.

“I’m trying to keep focused on the season right now, and not to worry about the recruiting stuff,” Holmes said. “At the end of the day making sure that this Calabasas team makes this city proud.”