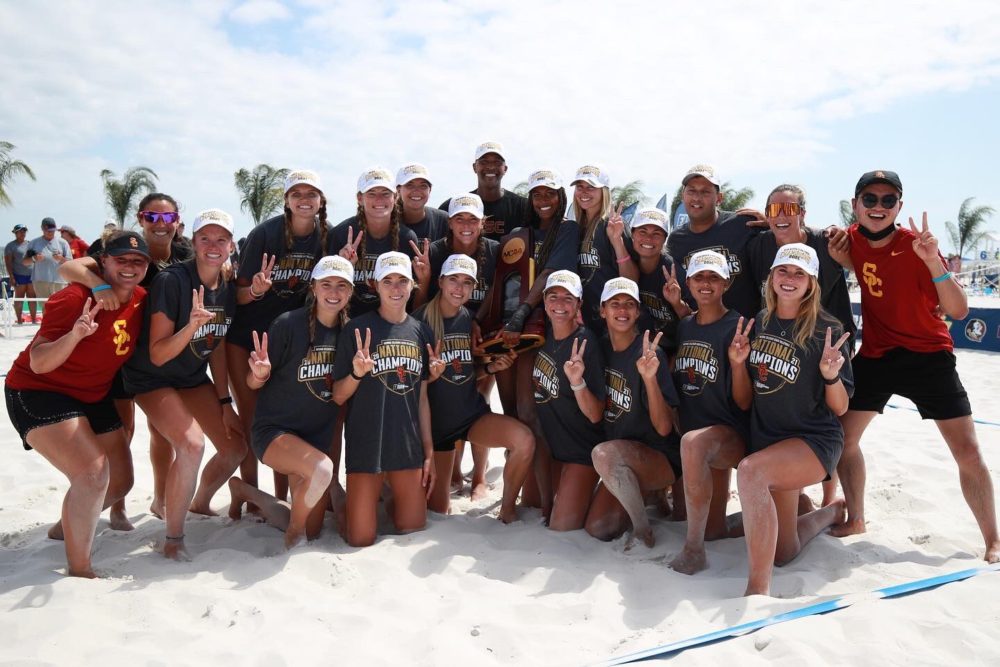 USC’s beach volleyball team won the national championship this past weekend and several more spring sports are either beginning postseason play or are already deep into it. Here is a rundown of some of the USC spring sports and their latest happenings.

The Trojans clinched their victory with a vicious serve on by Senior All-American Sammy Slater. Graduate Julia Scoles and Slater were named the AVCA/CollegeBeachVB.com National Pair of the week for their late-game heroics and championship-winning performance.

The No. 12 ranked USC men’s tennis team is moving onto the sweet sixteen of the NCAA tournament after winning their 14th consecutive second-round match. They beat Pepperdine
after notching a 4-2 victory Saturday.

After securing the title for the Trojans in the Pac-12 tournament, Stefan Dostanic busted out his heroics again this weekend. He clinched the game for USC after a 12-10 tie-breaker.

The Women of Troy are also headed to the sweet sixteen of the NCAA tournament as the No. 35 ranked Trojans upset the No. 12 ranked Florida Gators 4-1 this Saturday.

Redshirt senior Summer Dvorak clinched the 7-5, 6-3 victory for the Women of Troy of the Gators’ Sarah Dahlstrom. USC will take on No. 6 ranked NC State on Sunday at 7:00 am in Orlando at the USTA National Campus.

Star Senior Amelia Garvey secured her third round under par in her last four rounds as she led the Women of Troy during the first round of NCAA Stanford Regional this Monday.

The rising star also clinched the Pac-12 Tournament championship for the Women of Troy. The Trojans are sitting in fifth place as they need to maintain their top-six status out of 18 teams so they can advance to their 23rd consecutive NCAA championships final field. USC will tee off with fourth-place Oklahoma State and sixth-place Florida on Wednesday morning. USC will begin Wednesday at +3 as a team, holding a six-shot lead over Florida for the sixth spot, and a seven-stroke lead over Arizona, in seventh.

The USC Men’s Golf team, led by seniors Leon D’Souza and Kyle Suppa, are headed to the 2021 NCAA championships Tallahassee Regional as a No. 10 seed. The Regionals will take place May 17-19.

The competitors will compete for a chance to play in the national championship, which takes place from May 28-June 2 in Scottsdale, Arizona. The Trojans are one of eight Pac-12 teams taking part in the regionals.

USC Track and Field set all kinds of records when they took on UCLA earlier this month. Matthew Katnik set the school shot put record while TeeTee Terry, Isaiah Jewett and women’s 4×100 and 4×400 relays all set dual-meet records.

The USC women are the No. 1 seed in the 10-team NCAA tournament beginning Wednesday. The Trojans’ first game will take place on Friday at noon against the winner of Wednesday’s match between Salem and Marist.

The USC women are 19-1 this season, the only loss coming in the regular season finale against UCLA. The Bruins are on the opposite side of the bracket as the No. 3 seed.

USC holds a 20-21 record and is in ninth place in the Pac-12 with 10 games remaining. Nine of the final games are against sixth-place Arizona State, eighth-place Washington State and tenth-place Utah.