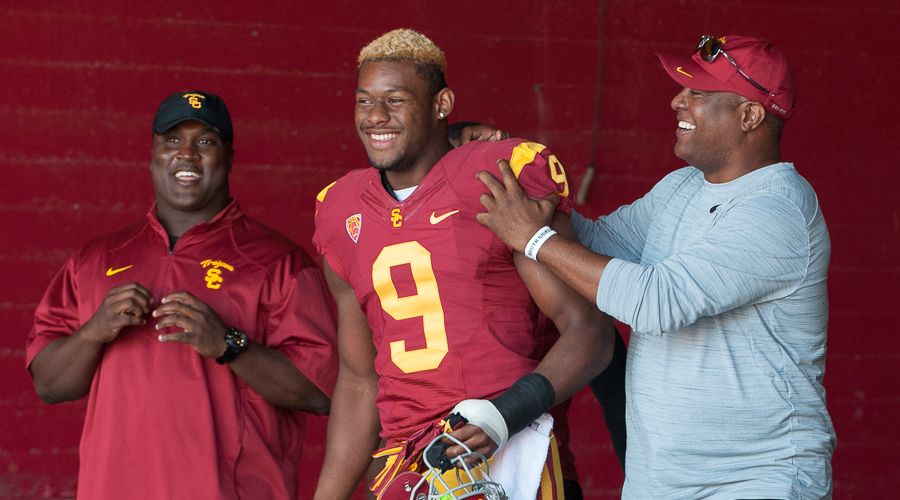 The Trojans held their spring game on Saturday at the Coliseum, which included an 82-play scrimmage that was won by the offense 37-23 using a modified scoring system.

There wasn’t much of an opportunity to effectively judge the USC run game as the defense did not tackle players to the ground but Trojans coach Steve Sarkisian still saw plenty that he liked.

“We wanted to finish strong, to play like we have been playing all spring with tempo and a sense of urgency,” Sarkisian said. “Obviously there was an emphasis on throwing the ball and we saw both Cody (Kessler) and Max (Browne) do their thing but I also loved the way our defense was able to get a few turnovers.”

Kessler led the first-team offense and was his usual efficient self by hitting 8-10 passes for 126 yards and a four-yard touchdown to Christian Tober. Browne completed 24 of 37 passes for 251 yards and two scores, a four-yard pass to Tober and a 15 yard score to JuJu Smith, who led all receivers with nine catches for 152 yards.

“I thought we came out today and performed well in front of our fans,” Kessler said of the 22,788 in attendance. “Now it’s up to us to take that momentum and carry it through the summer and into fall because we know there are a lot of expectations waiting for us this year. The biggest thing is going to be maintaining our focus, and I think we will do that.”

The defense had five players with five tackles apiece, including linebacker Su’a Cravens who added a pair of tackles for loss. Grant Moore had a recovered fumble and Jalen Jones had an interception off Ricky Town.

“I want to show that I can be a versatile player,” Cravens said. “I like being closer to the line of scrimmage because I can be more active, it allows me to be me and play free.”

One of the more impressive elements of the day was the placekicker spot, where Matt Boermeester and Alex Wood have been locked in a battle all spring for the open spot. Both kickers went 2-2 on the day with Boermeester hitting from 52 and 39 while Wood was good from 35 and 51.

Video: Highlights from the spring game

Key plays from the day

Recruits spotted at the spring game