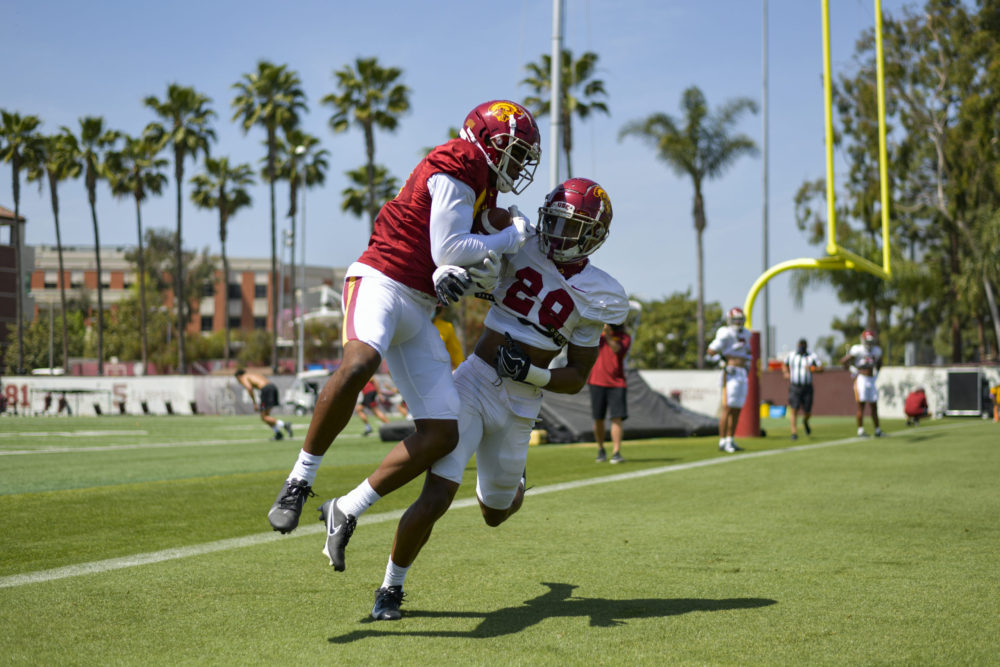 It’s not about the destination, but the journey. You’ll hear this phrase countless times in your life and while it’s true, spring ball may be the perfect example of this, especially according to USC tight end coach Seth Doege.

“We talk about it all the time,” Doege said this week. “One thing that [USC offensive coordinator] Graham [Harrell] always echoes to the unit is we never want to sacrifice short-term success with not doing our technique or fundamentals that are being taught.”

“We want to create habits that will put us in a position to sustain long term success,” Doege said. “That way when it comes to fall camp, fall games, we’re right where we need to be from a fundamental standpoint.”

The specific example Doege gave was if a receiver is asked to work on a release for a fade route and he runs it correctly twice but the ball falls incomplete, that’s a better use of time this spring than if he runs it incorrectly but makes a catch.

Doege reacted a bit during Tuesday’s media session when it was mentioned that the defense was ahead of the offense right now.

“I think we’re right where we need to be offensively, especially with the older guys,” Doege said.

There are some new faces in the offense and especially as it pertains to the tight ends working with the offensive tackles. Offensive line coach Clay McGuire has introduced new terminology and three of the four tackles on the first two groups are just second-year players with very limited experience. Doege is a new position coach himself, so there is still some feeling out going on this spring at those position groups and the results haven’t been flawless. But again, for Doege it isn’t about the results.

Doege also brought up an interesting point regarding potential uneven play from the offense to this point. Because of install packages for specific days, the team is running certain plays for each practice regardless of what the drills are for that day. So the team is running certain plays in the red zone that are copies of plays they run within the first 80 yards of the field, instead of plays specifically designed for inside the 20-yard line.

“We don’t have our full arsenal of redzone plays sometimes, and so sometimes the practice gets skewed in that sense,” Doege said. “But it also makes us as an offense, call those plays in the redzone area and have to go execute those plays in the redzone area. And so we’ll continue to get better at that. Obviously we need to be better in the redzone. We need to come away with points. I thought we’ve done some good things and we’ll continue to get better.”

Saturday’s spring game will give USC fans the first opportunity to see the Trojans this spring, with 5,000 guests at the Coliseum and the game televised on Pac-12 Network. The roster will be split into Cardinal and Gold teams, but again, the ultimate winner won’t matter.

“In the spring, you’re not in the business of immediate results,” Doege said, mirroring the defensive coaches when they speak about the spring being a time to establish culture and the way things are done. “We’re not trying to win the game. We’re not trying to win the spring day. We want to create habits that will sustain long-term success when we play Notre Dame. That’s the habits that we want to create right now.”

Part of the journey this spring has been tough, physical practices. Tight end Erik Krommenhoek has been involved in plenty of spring practices during his USC career. He agreed when asked if this year has been the most physical.

“I think it’s definitely been our most physical spring practice,” Krommenhoek said. “I think a lot of it not only stems from Graham’s philosophy, but from the defensive philosophy. Those coaches are always preaching physicality to their guys. Graham’s always preaching physicality to us. I don’t know if we’re going to be in full pads every day, but I think that we are. I think that’s just part of the mentality. I think it’s going to help us as a team.”

This falls right in line with the team’s philosophy as Doege said the team always preaches selflessness, toughness and discipline.

“If we can believe in those things, like taking care of your teammates, battling through adversity and doing what you’re coached to do, then obviously we’re going to continue to grow as an offense,” said Doege.

Clearly, results don’t matter nearly as much as the path to those results, so enjoying and learning from the process is the best way for USC to approach Spring Ball ahead of a hopeful regular season.

Skyler Trepel is currently pursuing his Master’s in Sports Journalism at USC, where he is a sports anchor for ATVN, reporter, NBA columnist and podcast host, producer and editor for Annenberg Media. Skyler is also a writer for LakeShow Life, Host of the interview-style Mamba Moments podcast on the Bleav Network and co-host of the Shooting Bricks podcast, along with multiple guest appearances. As a lifelong sports fanatic and experienced multimedia journalist Skyler has a passion for the excitement, inspiration, and perseverance of the human spirits through interviews and storytelling within the realm of sport.