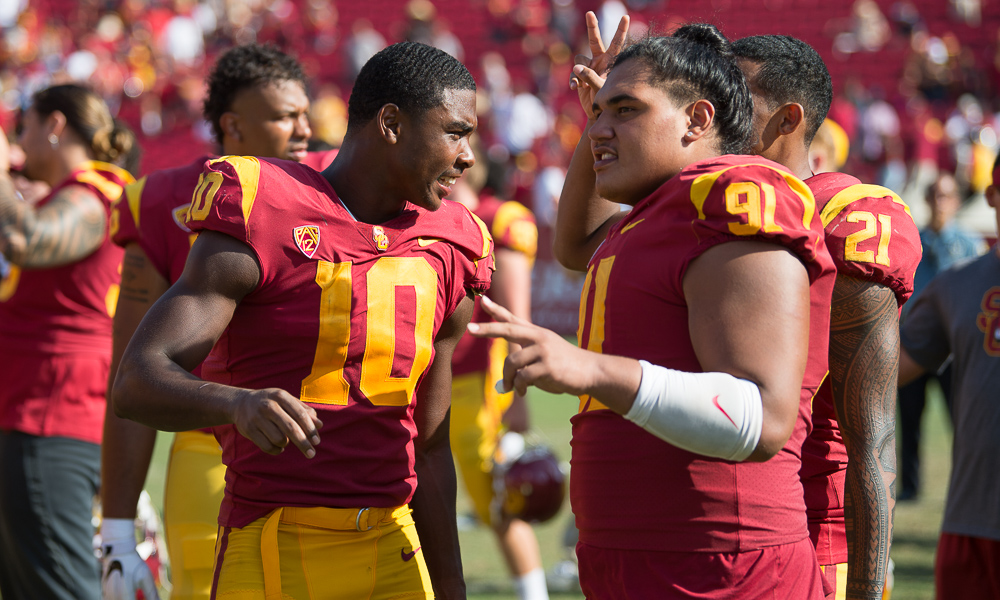 With USC Spring Ball set to begin this afternoon, WeAreSC offers a look at a projected depth chart for the Trojans, complete with notes on each position.

However you want to spin it, whether it’s Daniels’ job to lose or Sears’/Fink’s job to take, the reps that Daniels took over the course of last season count for something in this quarterback competition, so it won’t be surprising if he’s the first guy up to start spring. The big question is, “How will these guys fit into Graham Harrell’s new offense?” And the answer to that is one of the two or three most important things to get out of spring ball. There is no thought that Slovis will push the returners as far as a starting spot, but it will be good to have a fourth scholarship quarterback on the roster, and his upside as a thrower in this system is intriguing.

It’s most likely an OR situation with the two guys at the top, particularly if Carr is truly back healthy this spring. Stepp flashed some promise late last season, which means the Trojans yet again have three very talented backs they’ll need to utilize in some kind of rotation. Malepeai’s one-cut style and physical ability should suit him well in this system, running against what will likely be undermanned defensive fronts, while Carr’s ability out of the backfield will be a real problem for defenses.

Velus Jones Jr. added his name to the transfer portal last week, but is still listed on the USC roster. With his impending departure, in addition to transfers by Trevon Sidney, Josh Imatorbhebhe, and Randal Grimes, numbers at the wide receiver position are way down, and we’ll see plenty of action from walk-ons this spring. However, the top of the group is as talented as any position on the roster, as a starting group of Pittman, Vaughns, and St. Brown is likely the most talented in the conference. The big question will be answered by watching how these guys fit and if they can excel in the new system. It will also be worth watching if Williams takes that next step, as well as if Jackson can make a quick impact. It won’t be surprising if one of the walk-ons finds his way into meaningful time as a slot receiver.

The tight end position will be an interesting one, because Graham Harrell used a tight end extensively at North Texas, but it wasn’t always where you’d expect. With the numbers down at wide receiver, it won’t be surprising to see Falo split out and working as a big receiver. This offense also seems to fit the true freshman Wolfe very well, as someone who is skilled as a blocker and receiver. Imatorbhebhe is the big question, as his injury continues to linger. At this point, anything USC gets out of him on the field going forward will be considered a bonus.

The biggest news along the offensive line was Jimmons flipping over from his defensive tackle position. That will definitely be something to watch this spring, and if that’s a move that works, he’ll bring some much needed depth there. Jackson is locked in at left tackle, while McKenzie was the first man up to replace Chuma Edoga at right tackle last year. Bradley, a redshirt senior, could have one final push to grab a starting spot, but at the very least will provide depth at either spot.

Vorhees is a returning starter and now listed as OG-OT, while Vera-Tucker looks like a good bet to either step in for Chris Brown at left guard or push Vorhees out at right guard. This spring would be the time for veterans like Martin and Daniel to take a major step forward, while we’ll get a chance to see where Douglass is in his progression after redshirting last season.

Here’s a position with a true two-man battle for a starting spot. Neilon has an extra year on Dedich and started last year’s season-opener at center. There’s a sense that you can’t go wrong with either player, and a chance that the “loser” could be good enough to step in at another interior spot as a starter.

This is another spot where USC should feel very good about its starters, but the lack of depth is concerning. Tuipulotu, Tufele, and Pili are proven and the only question is as to whether they are going to take that next step and become dominant. Trout could use this spring to make a move into the rotation, but he’ll be limited by a back injury.

It will be interesting to see who or how many of these guys spends some time inside during the spring, as it wouldn’t be surprising to see a few bounce around the line to provide depth or find the right mix in various formation. Rector is the senior leader, while big moves from Lichtenstein, Tremblay, and Murphy would be welcome. Jackson and Figueroa are the newcomers, and both will have a ton of attention on them as USC searches for someone on the defensive line who can be a disruptor and create consistent pressure on the quarterback.

There is a ton of potential here, but one of the keys for the defense is finding a couple guys in this group who really step up this spring. Iosefa has plenty of experience, but didn’t seem to take that next step last year. There is obviously some faith in the young group of Echols, Winston, and Abdul-McClain, because Kana’i Mauga, who showed plenty of flashes last spring, has been moved to the inside.

Houston returns as a starter and seems all but certain that Gaoteote will step in for Cameron Smith alongside him. One to watch this spring will be Tuliaupupu, who missed last year due to injury but was just as heralded a recruit as Gaoteote coming out of high school. Scott and Mauga are entering their second seasons and it wouldn’t be surprising to see either push for significant time as backups and on special teams. Goforth is a smart, sound, football player who could be one of the newcomer standouts this spring.

Numbers are way down at cornerback, and things could get interesting this spring. Griffin is a starter at cornerback, though he will be limited during spring while recovering from shoulder surgery. I don’t know if there’s a more important player to see develop over the next few weeks than Taylor-Stuart, who is a phenomenal athlete, but needed to become a better cornerback. We’ll see if he’s made that leap, because he’s almost a starter by default after Greg Johnson entered his name into the transfer portal. Williams showed flashes last year after spending much of his time at safety, but he’s listed at cornerback now. Getting something from Davis, who has flipped between offense and defense during his career, would be a huge benefit. Williams has the talent to play as a true freshman, but he’s still recovering from a knee injury.

If numbers are bad at cornerback, they don’t get much better at safety. With Pola-Mao still recovering from a shoulder injury, we’ll likely see Hufanga and Pollard up first. It’s another spot where you feel pretty good about the starters, particularly after the flashes Hufanga showed last year, but the depth just isn’t there. Allen should have plenty of opportunity to make a big impression as an early enrollee. Here’s another spot where it wouldn’t be surprising to see a walk-on or two grab a few headlines this spring.