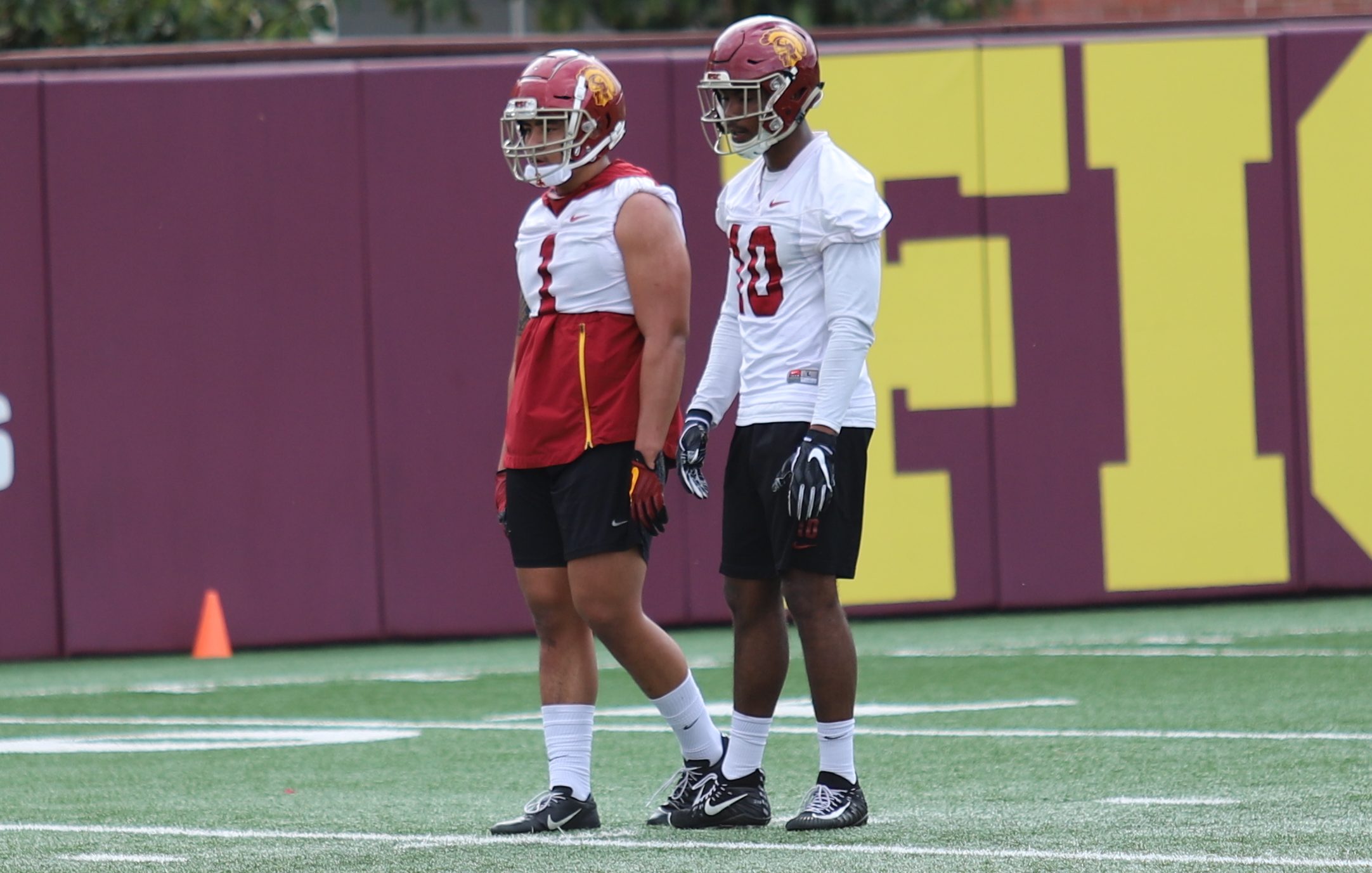 WeAreSC offers a look at what coaches and players had to say following the first day of USC Trojans spring ball.

“Before I get started, this is the first time to be back out on this field after losing a great member of the media in Garry Paskwietz—a great Trojan and a great professional. And I wanted to, in memory to him, say thank you for all he’s done for our Trojan family and the professionalism that he’s brought to the table since I’ve been here.”

“One of the things I’ve told them that leaders have to do, is to be able to own mistakes from a previous season. And for me, the ownership has to be able to identify the mistakes that happened, to be able to make it a priority out here at practice, to be able to have a plan to be able to correct those things, and then execute that plan. This will be the last time that I talk about the 2018 season. This is the 2019 football team and they’re moving forward.”

“For me, the priorities are what you saw today. The first thing is, and we started a while back, when we hired a new offensive coordinator, as well as asked coach Clancy (Pendergast) to simplify our system to allow our defensive kids to play faster, make sure our personnel is in the right place to provide a bigger front. We basically created simple, effective schemes, to allow our kids to play faster.”

“I want us to focus more on the fundamentals and techniques of the game, because I think we’re as talented as anybody that we’ll play next year, at least the equivalent, if not better. As you saw today, a lot more emphasis was put on our individual drills—almost 45 minutes just of individual drill work, before we got into any team work.”

“We talked about ‘It was all about the ball,’ but we didn’t live it. And for us, it’s got to be about taking the ball away and securing the ball.”

“It’ll be about competition. This field has always been about competition and I don’t want any player on this football team to feel comfortable with his position. He’s always fighting for a job; he’s always competing for a job. So every Friday I’ll release a two-deep, each week. Every Friday, whoever is playing best in that moment, will step out there first on Saturdays.”

“I really like where the mindset of this team is right now. They’ve got a chip on their shoulder. They are extremely hungry. And I see a sense of urgency about them to be great. And our coaches, especially our new ones being here, I feel a freshness, a new energy, with our new coaches, our new support, our new recruiting, the new members who have come on board. I love what they’re bringing to the table right now.”

“I told our coaches, I will not worry about scheme in this training camp. I’m going to be about the fundamentals and technique, the discipline of the game, the turnover margin, and making sure all the guys are competing at the highest level. That will be my role.”

On Graham Harrell: “I love his energy. I love his mindset when it comes to the passing game. I’ve been so impressed as a guy who’s going to be our playcaller, going to be our coordinator, how he’s just taking over the offense immediately. And you see the energy of the kids surrounding him right now.”

On Graham Harrell: “I love his system. It’s built to go fast, built for an athletic quarterback to be able to spread the ball around. The emphasis of the system is to make smart and fast decisions. Get the ball out of your hand quick, get it to the right guy.”

“I think all of us carry a little chip on our shoulder.”

On last season: “Individually, I don’t think I got to reach my full potential in certain areas.”

On whether he thought about transferring: “That thought has never gone through my mind.”

On his initial thoughts on moving to an Air Raid offense: “Any offense is good for RBs like us, because we try to make sure we’re good in every angle—running the ball, pass blocking, and catching out of the backfield.”

On his mindset this offseason: “I feel like the mindset for me was get all the negativity out and focus on the 2019 season and get the whole team better. Be a better leader and try to get everybody as a collective unit.”

On what was different about this offseason: “I feel like we pushed each other even more. We put more accountability on ourselves rather than our coaches. We put it all on us and made sure we can do it. Pushing guys, making sure we’re all finishing. Different things that I feel we lacked during the season.”

“Everybody is out here fast, ready to go, but we have to keep that same tempo for 15 practices, so we’re going to see. A little faster tempo. More plays getting done. More reps. More reps means we can watch more film. It’s a good thing.”

On potential reasons why he was moved to middle linebacker: “I can be able to communicate and know the defense, know the checks that are maybe harder for other people. I know the playbook really well.”

On his goals for the spring: “I’m going to grind my way out, try to fight for that starting spot and I expect to be on the field. Wherever coach needs me or wherever it fits best for the defense, I’ll play it.”

“Right now I’m working on my Will (weakside linebacker), just focusing on that right now until coach changes it, or leaves it at that.”

On the benefits of moving positions: “It allows me to play downhill a lot more. It allows me to move around and be natural out there and just fly around as best I can.”

On the first practice of spring: “It was intense. Came out as a team and competed as a team. Competed against each other as fast and as fierce as we can. It was very intense. The way that we’re doing it right now, I like it a whole lot.”

On what he is working on for his sophomore season: “Being more vocal. Trusting my eyes.”