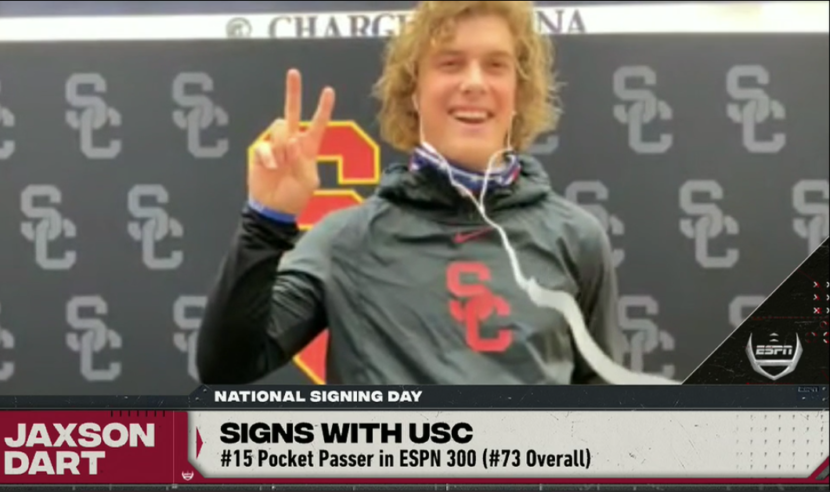 USC announced the addition of 20 new players to the future roster on Wednesday, as 19 high school standouts and one transfer became the newest official Trojans. There are still a few big names out there who remain uncommitted or unsigned and would finish off this USC class in a big way. But for now, we’re looking at some of the standouts in a number of different categories, including most important signee, best recruiting group, guaranteed star and others.

Erik McKinney: Jaxson Dart. USC had to get two quarterbacks in this class and that’s not an easy thing to do when you’re going after two good ones with a lot of offers. The Trojans also had to navigate a three quarterback situation for a bit but wound up with two that they clearly like. Had the Trojans gone all in on Dart, lost Garcia, and then watched Dart sign with UCLA or BYU, that would have been a tough pill to swallow on signing day.

Greg Katz: Korey Foreman would be the obvious choice since he says he would sign on Wednesday but will keep his choice quiet until the All-American Bowl: Declaration Day on Jan. 2.

Bestlakersfan: Julien Simon & Michael Trigg. Both of these guys are big-time players and had a lot of local and national options available to them. For USC to go into Washington and then into Florida and get top 100-150 top guys is really big.

EM: Julien Simon. USC didn’t sign a linebacker in the 2020 class and Simon is the only one (so far) in the 2021 class. It also gives USC a presence at FSP, the training home for many of the Pacific Northwest’s top prospects, so Simon is a signee who could lead to others from the area.

GK: It would be Foreman if he actually signed with the Trojans on Wednesday, but in the long run, I think that Utah QB Jackson Dart is my MIS, since the USC quarterback position has such responsibilities to carry the offense and the team.

BLF: Miller Moss. USC needs QBs and we need some talent there that can step-in right away. In addition to being both of those, Miller was also a big-time recruiter for USC. It’s going to be interesting to see him on campus and how he develops, but he is the “rock” of this class.

EM: There just weren’t any real surprises this year, and that in itself is my surprise. With this being such a strange year for recruiting, I thought there was a chance we’d get some weird things happening late or even on signing day, but things went pretty much according to plan.

GK: Although not a Wednesday recruit in the sense of the term, I’ll go with former Alabama defensive lineman Ishmael Sopsher (6-4, 310), who was once a 4-star prospect from Amite, Louisiana, and was originally good enough to be given a Crimson Tide scholarship in the first place.

BLF: Lake McRee. I am very surprised that Lake is still part of the class. We don’t really utilize the TE position very well and to see him stick is surprising, although not in the regular “surprise” way of looking at things.

EM: I like Julien Simon enough that I’m tempted to say linebacker here, but I’ll go with safety. Getting three guys that can do a lot of different things in Anthony Beavers, Xamarion Gordon and Calen Bullock is a really big deal for a position that has been vital to the defense this season. Those guys will give Craig Naivar some versatility in how to use them and they’re good enough to be on the field fairly early in their careers.

GK: Quarterback, since not only was it a position of need, but credit to Clay Helton and Graham Harrell for aggressively going after Miller Moss and then Jaxson Dart and getting them both signed.

BLF: I’m cheating here because I’m going with the entire DB class, but there is just too much coming in on both the C and S positions to ignore. You just can’t ignore the athletes coming into both of these positions and the fact that many will likely be multi-year starters.

EM: It’s Kingsley Suamataia. I think the three offensive linemen signed on Wednesday give position coach Tim Drevno some more interesting pieces to work with up front, but the Trojans can’t continue to lose out on elite West region offensive linemen.

GK: It will be Korey Foreman if he doesn’t sign with the Trojans. Next up is defensive end Aaron Armitage to Stanford because the Trojans seemed to be in good shape until the end. However, when you compete for a player that’s been accepted to Stanford, you know you have your hands full.

BLF: Kingsley Suamataia. Without a doubt, for me, this is the biggest whiff. I don’t think we ever had a great chance, but you just cannot continue to let elite tackle prospects with very high floors and high ceilings go elsewhere. This is not to say we are not getting a few talented kids in this class, but these are the types of players USC needs along the OL to be able to compete at a high level.

EM: Julien Simon. There are no guarantees with recruiting and projecting guys to the next level, but this guy has literally everything you’d look for in a high school prospect.

GK: Korey Foreman if he actually has signed with the Trojans. If not, I am going with Jaxson Dart.

BLF: Prophet Brown. Note, this will likely change by the time February rolls around, but as of now, I’m going with a bit of a surprise pick. Brown is an ELITE athlete and I think he will be a star for USC as a corner. With Donte going after him, wanting him and having him as his position coach, I think that he will blossom into a big-time player.

EM: Running back Brandon Campbell. It’s clear that this staff hasn’t exactly found a running back situation that has clicked for this offense. There have been injuries at the position and some issues with the offensive line and a group of running backs that were holdovers from before Graham Harrell arrived. But Campbell is the first back this staff sought out to sign from beginning to end and it’s clear they see a role for him in the offense. I’m intrigued to see what that looks like and how dynamic he can be for the Trojans.

GK: Defensive lineman Colin Mobley from Hyattsville, Maryland/ DeMatha HS. Given that this is really USC first-year defensive line coach Vic So’oto’s first signed recruit and the fact that So’oto knew of Mobley when he coached at Virginia, I find this signing the most intriguing. I saw Mobley play against St. John Bosco, and he did a good job against one of California’s premier powerhouse programs.

BLF: Xamarion Gordon. I think the upside for Gordon is very, very high. He needs to work on somethings, but I love this kid’s game quite a bit and he definitely brings something unique to the positon.

EM: I think USC needs another running back in this class, either out of high school or the transfer portal. And I think they need three more elite defensive players, preferably one at each level of the defense and, oh look over there, three of the top Southern California prospects are still unsigned. Landing defensive end Korey Foreman, linebacker Raesjon Davis and cornerback Ceyair Wright would do incredible things for the USC narrative for the 2021 class and really launch the 2022 efforts.

GK: Linebacker Raesjon Davis from Santa Ana (Calif.) Mater Dei, who seems to be in a quandary between signing between LSU and the Trojans. This is a recruiting battle that can tear the fibers from a family unit over the final decision, which won’t come until the February signing period.

EM: Transfer defensive tackle Ishmael Sopsher. It’s probably cheating to pick the transfer instead of one of the true freshmen, but Sopsher’s addition could be incredibly important for the USC defense if Marlon Tuipulotu elects to leave early.

GK: OLB Julian Simon who is already so physically mature. He could almost play anywhere. He has attitude and the sense here is that he will play early. He should be a good one.

BLF: Julien Simon. I think his play making, football instincts, high football IQ and athletic ability will be hard to beat out, but you also have to see the glaring need at the LB position. He will play and, maybe, play quite a bit as a true-freshman.

EM: It’s probably not an exact comparison, but I see a lot of Drake London in Michael Trigg. The bodies are a little different, as Trigg has London by about 20 pounds, but you can see the basketball talent in them when they play football and this hybrid tight end/wide receiver position at USC is such a perfect fit for both. Both are surprisingly athletic and quick for players their size and they are a complete pain for any defender to cover because none have the same combination of size and speed to win consistent one-on-one matchups.

GK: No doubt it’s Jaxson Dart, who reminds me strongly of Sam Darnold. Big, tough, courageous, and a great athlete, if he had played in SoCal, one could make the argument that Jaxson might have been the No. 1 area quarterback of the Class of 2021.

BLF: Jay Toia. Jay really reminds me of Antwaun Woods. Both are natural NT guys, with very similar builds, strengths and ability. I like his game a lot and think he will become a very solid player for us after a year or two in a college S&T program to lose some bad weight, improve his technique and become stronger.

EM: Which quarterback? I realize this isn’t going to be answered right now or even in the next few weeks, but it will be fascinating to watch the competition between Jaxson Dart and Miller Moss this spring, and there’s a good bet that one of the two will be the USC starter following Kedon Slovis. It’s difficult to believe that both will spend their entire careers at USC, but that’s the nature of the quarterback position in college football right now. USC brought in two really good ones and now we’ll see which one comes out on top.

BLF: Josh Simmons. Why not take a flyer on him? I get that he wants to play DL and projects and plays much, much better as an OL (OG), but what is the worst that happens? He doesn’t see the field for a couple years as a DL and then reverts to OL. Upside? He becomes a very good player in the trenches. Just don’t see the thought process on this one.