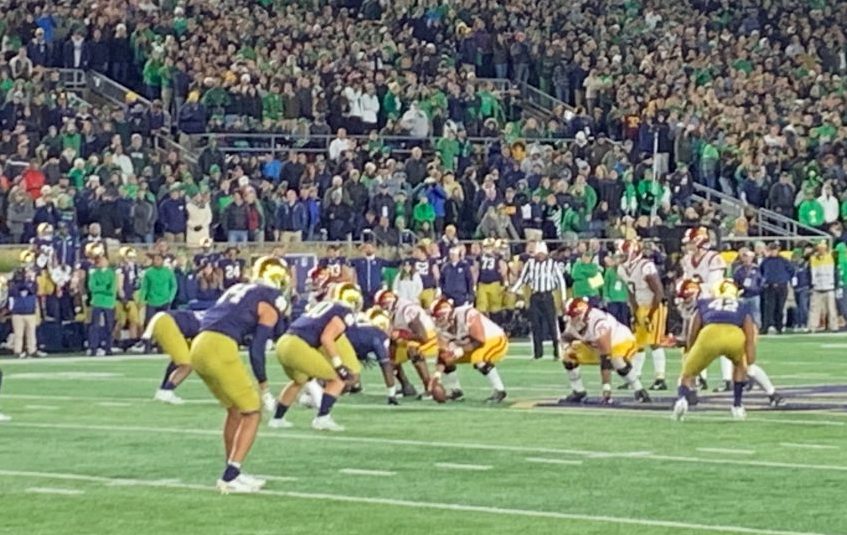 The Trojans showed heart in South Bend, but ultimately, the Fighting Irish ran their way to a 30-27 win on Saturday night, dropping USC to 3-3 on the season.

USC will take some positives away from this game, as the Trojans fought back in the second half to cut a 17-point Notre Dame lead to 23-20 with 10 minutes left in the game.

But ultimately, 308 rushing yards from Notre Dame was the difference. Fighting Irish tailback Tony Jones Jr. ran for a career-high 176 yards. Wide receiver Braden Lenzy took a misdirection play 51 yards for a touchdown. And quarterback Ian Book ran for 49 yards, including the back-breaking touchdown with a little more than three minutes remaining.

USC got the clean game they needed in terms of turnovers and penalties, as the Trojans didn’t commit a turnover for the first time since the Washington State game last season, and were penalized just twice. But some familiar issues again cropped up, as the USC defense missed tackle after tackle in allowing Jones to rack up significant yards after contact on seemingly every play. The Trojans also couldn’t corral Book in the pocket, as the quarterback provided an exclamation point on the game with two late runs — the first converting a 3rd-and-10 when the Trojans could have forced a field goal to get the ball back down by six points for a potential game-winning drive, and the second the aforementioned touchdown.

Offensively, the Trojans found some late life. After recording one field goal and five punts on their first six possessions, the Trojans scored a field goal and three touchdowns on its final four. But once again, it felt as though a running game that was having success wasn’t utilized as often as it could have been. USC running backs finished the game with 27 carries for 172 yards, but the Trojans threw 43 times to 27 runs.

Markese Stepp was especially effective, bouncing off Notre Dame defenders for extra yards all night. But Stepp had just 10 carries, which he turned into 82 yards and a touchdown.

As Notre Dame took a 17-3 lead into halftime, the Trojans looked lost — a feeling that was magnified by the scuffle that broke out between the teams as they headed into their locker rooms. Notre Dame had outgained the Trojans 289-146 in the first half, the Trojans had just 74 passing yards, and they were 2-of-8 on third downs.

The third quarter looked to be a continuation, as a missed tackle on the kickoff allowed Notre Dame a big return to start a drive that ended with a field goal. But down 20-6, USC found life in a fourth-down stop with a little more than four minutes left in the third quarter.

Two impressive Stepp runs opened the door for a 38-yard touchdown pass from Kedon Slovis to Amon-Ra St. Brown, and the Trojans were back in the game.

But the Trojans just couldn’t get the offense and defense clicking at the same time.

At times, the offense played well enough to win. Slovis finished 24-for-35 for 255 yards and two touchdowns. St. Brown caught eight passes for 112 yards and a score. Tyler Vaughns came on late with a huge jumpball grab on a third down play, and finished with four receptions for 47 yards and a touchdown. And Vavae Malepeai and Stephen Carr combined for 17 carries for 90 yards.

At times, the defense played well enough to win, forcing Notre Dame to punt on its first three drives. But in an all-too-familiar scene, one of the game’s turning points came when the defense had Notre Dame backed up and allowed a 12-yard run because it wasn’t set up while making a substitution. That provided the momentum for a 97-yard touchdown drive that gave the Fighting Irish a 7-3 lead, and an edge they would never relinquish.

The Trojans have run out of opportunities for moral victories, and this won’t count as one. They were outplayed too often, couldn’t find enough answers on defense for the Notre Dame ground game or on offense for the three-lineman scheme the Fighting Irish deployed. But what looked like it could have become a blowout turned into a competitive game in the second half, and the Trojans should ultimately be able to take something from this performance moving forward. They still have a legitimate chance at a Pac-12 South title, and a Pac-12 championship, but issues with run defense still need to be cleaned up with Arizona and quarterback Khalil Tate coming to town next week.