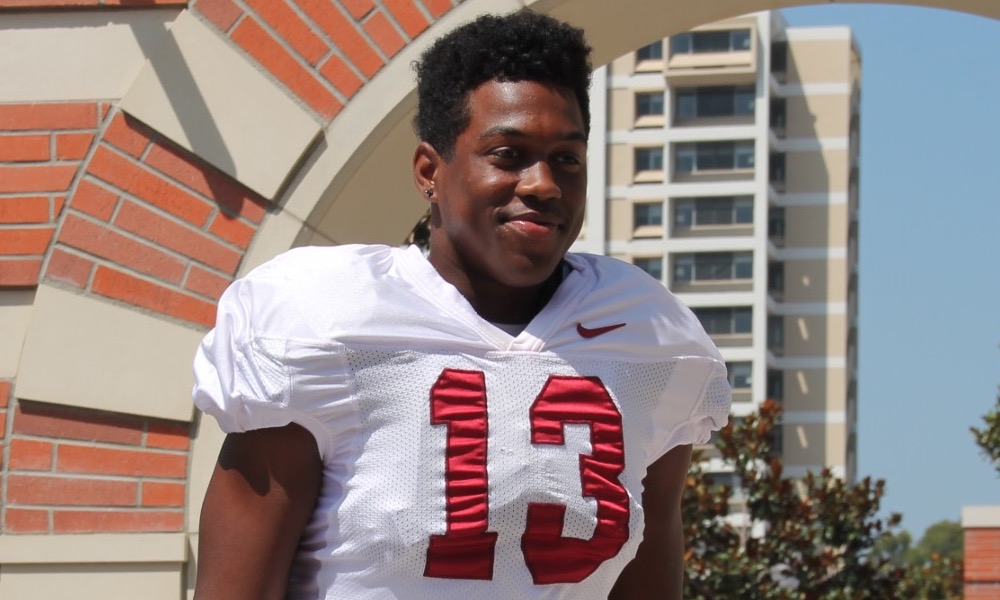 The Trojans held their second scrimmage of fall camp today with a lot of anticipation of this being a day where the QB competition could be settled or at least take a major step in that direction.

If you were waiting for that to happen it looks like you will be waiting another week because the word used most from observers to describe the action today was “uneventful”.

It was a shorter than expected session because a planned 2:00 drill for each QB was eliminated due to a shortage of offensive tackles (Austin Jackson, Chuma Edoga and Clayton Bradley were all out of action today). There was only one offensive touchdown, a short run by Jack Sears, and a general lack of explosive plays for the offense. Of course, Clay Helton put a positive spin on that by noting the first scrimmage had plenty of explosive plays so the limited amount today was a good sign for the defense. Helton also praise the open field tackling for the defense, and he liked the fact that the QB’s did not take a sack today after being sacked 9 times in the first scrimmage.

“We got a look at a lot of young players today and it was the last scrimmage look we’ll have before the mock game next Saturday,” Helton said. “A couple of the young guys who jumped out to me were Levi Jones and Devon Williams. Levi had a couple tackles on Stephen Carr, while Devon made some big catches on the scoring drive. As far as the quarterbacks, my gut tells me it will be another week before we name a starter but I want to go in and watch this film to really evaluate today.”

Here were the starting line-ups

Daniels hit Vaughns on the opening play for a short gain with a tackle by Greg Johnson. Daniels hit Ware, Bolden with the tackle, short gain. Daniels scrambled and completed a short pass. Jones on a sweep to the right for four yards. Daniels to Vavae on a screen, Levi Jones with the tackle behind the line. Carr run, Jones tackle for no gain.

Fink tried to hit Grimes on a slant, Grimes slowed over the middle, if he kept running he makes the play. Fink overthrows Williams. Mauga pressure on Fink after beating Bernard Schirmer at LT. Quincy Jountti with a short run, tackle by Pollard and Griffin.

With Sears at QB we saw a drive that was almost exclusively Carr. Carr took the first handoff and gained 6 yards before a Pola-Mao tackle. Carr for the short gain before Pola-Mao and Jones combine for the tackle. Sears with a deep attempt but Langley was there to break it up, holding called on the play against the offense. Carr for 5 yards but the final Carr run of the drill went for nothing after he was met by Brandon Pili.

Daniels missed Williams on the first play of the series. Tufele came in with pressure on Daniels. Ben Easington with a run, Raymond Scott tracks down from behind. Daniels to Jountti on a screen, Pollard tackle behind the line. Easington carry and another Scott tackle. Daniels scrambles and hits Jones for short gain.

Fink to Trevon Sidney who had a nice weaving run with the ball in his hands. Fink to Falo who was hit by Bolden and fumbled. Fink to Sidney for a short gain. Fink rolls right and throws the ball away. Sears hits Williams deep down right side against coverage from Godfrey. Sears came right back to Williams on a slant against Godfrey to get the ball to the 2-yard line, where Sears promptly took a designed run for the only score of the day.

After the scrimmage Lynn Swann and Clay Helton talked on the field for a good 10 minutes before Helton met with the media.

The Trojans will take Sunday off, Monday is the first day of classes, and will return to the practice field Tuesday afternoon.