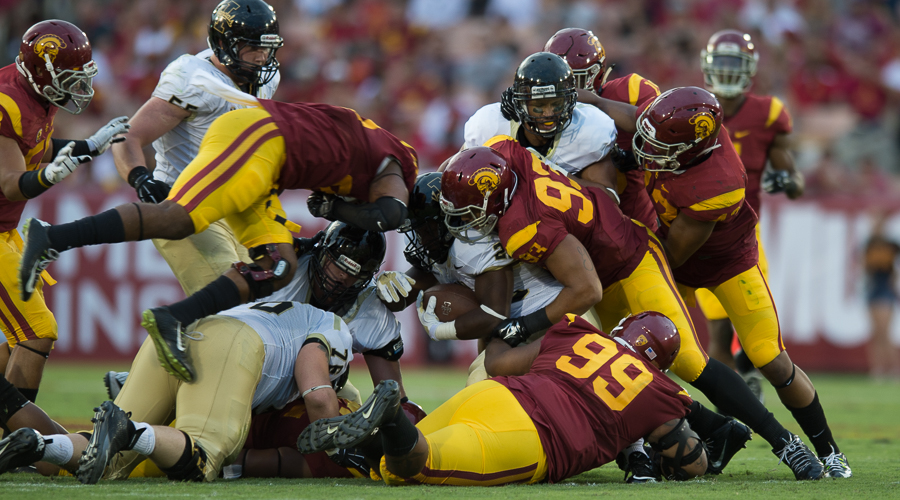 There was never any doubt in the outcome on Saturday night in the Coliseum as the Trojans started off hot and cruised to an easy 59-9 victory over a clearly overmatched Idaho squad.

Beginning the game with a stellar 7-play, 75-yard drive that was capped off by a Justin Davis one-yard touchdown run, USC quarterback Cody Kessler and the Trojans offense put on a show. The senior signal-caller was incredibly efficient throughout the game, completing 26 of 31 passes for a career-high 410 yards and three touchdowns.

Two of those scoring tosses went to JuJu Smith-Schuster, who had a night to remembered of his own, making 10 receptions for 192 yards – both career-bests.

On the ground, Kessler and Co. received plenty of help from veterans Tre Madden and Justin Davis, as well as freshmen Ronald Jones II, Dominic Davis and Aca’Cedric Ware. Jones, who broke off some electrifying runs, paced the unit with 83 yards rushing and one touchdown on eight carries. Davis, who missed the Trojans’ opener due to a rib injury, had a successful 2015 debut, amassing 74 yards and two touchdowns on the ground, while Madden also reached the end zone twice.

Adoree’ Jackson had a strong night on both sides of the ball, particularly on offense where he wowed the Coliseum crowd with some highlight-reel plays, including a weaving 30-yard gain in the first half.

Freshman Cameron Smith led the Trojans with six stops, one week after tying for the team-lead in tackles against Arkansas State with seven.