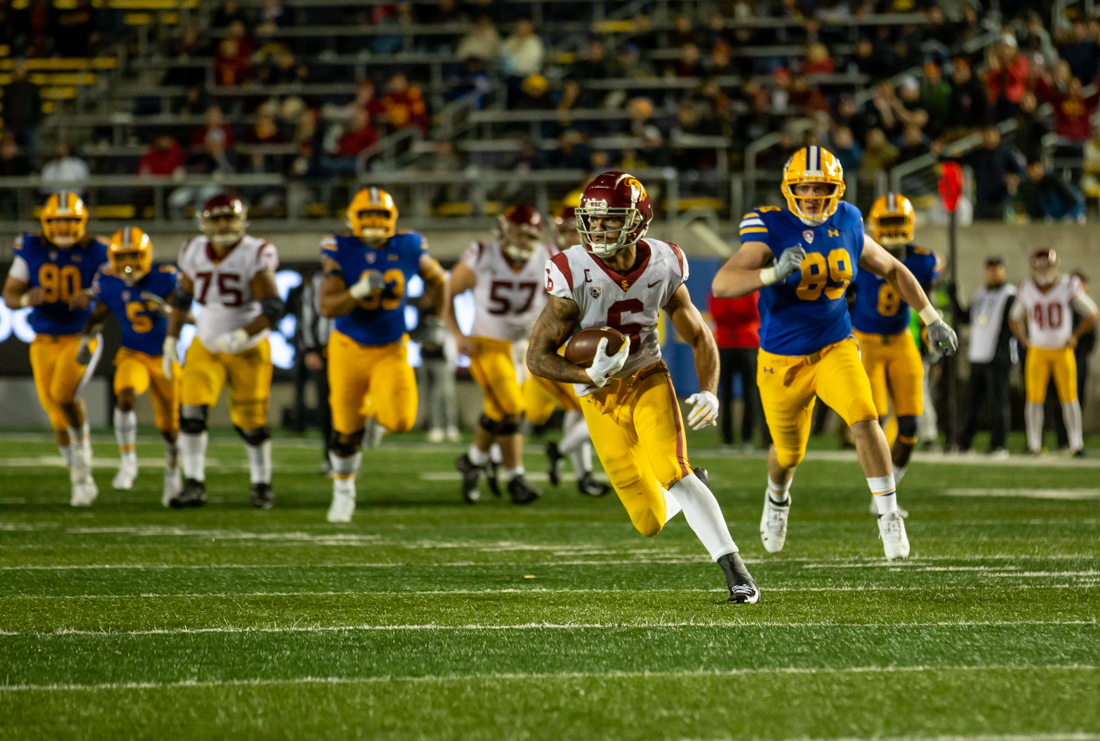 It took nearly two quarters of football, but the USC Trojans were able to settle in and take control of the game on Saturday night, dominating the Cal Golden Bears in a 41-17 win.

USC quarterback Kedon Slovis completed 29-of-35 passes for 406 yards and four touchdowns, and the Trojans piled up 31-consecutive points to turn a tie game into a route.

What was expected to be a defensive game got off to a fast start, as Cal and USC took their opening drives for touchdowns. But both teams lost important pieces along the way, as USC defensive end Christian Rector was ejected for targeting on the eighth play of the game, on a hit that forced Cal running back Christopher Brown Jr. out of the game due to injury.

Early in the second quarter, with the Trojans leading 10-7, the game turned for good with another injury. Cal quarterback Chase Garbers, who was playing his first game after returning from a broken collarbone, landed hard on his shoulder and went to the sideline for the rest of the game. The Golden Bears finished that drive with a field goal to tie the game at 10, but that was the last time the game was close, as the Trojans shut down backup quarterback Devon Modster.

With Garbers and Brown out of the game, Cal could get nothing going offensively. Meanwhile, the USC offense was just getting started.

Slovis tossed a jump ball to Michael Pittman for a 33-yard touchdown on 3rd-and-12 with just 43 seconds left in the first half, then found Drake London for an 8-yard score to cap the first drive of the second half. After a Chase McGrath field goal, Stephen Carr scored a short touchdown and the Trojans capped the 31-0 run with a short touchdown pass from Slovis to Josh Falo.

During the run, the USC defense held Cal to just 47 total yards and intercepted Modster twice.

USC outgained Cal 462 to 263, converted 7-of-13 third downs (plus a fourth down) and unleashed its passing attack against a very good Cal defense. The Golden Bears entered the game allowing just 234 passing yards and 20.7 points per game.

Pittman set the tone offensively, hauling in 11 receptions for 180 yards and the game-changing touchdown. True freshman Drake London had his best game of the season with six catches for 111 yards and a score. And Amon-Ra St. Brown had five catches for 85 yards and USC’s first touchdown. All three receivers had receptions of at least 45 yards, as the USC wide receivers were dominant despite Tyler Vaughns playing a very limited role due to injury.

Given the commanding lead and able to work against backups at quarterback and running back, the USC defense responded. It wasn’t a perfect game, as Cal engineered a 75-yard touchdown drive to start the game and averaged 4.7 yards per carry for the game, but the defense rose up with big plays when it mattered. Greg Johnson recorded an interception following a terrific play by John Houston to bat the ball in the air. Isaiah Pola-Mao also recorded an interception, which he subsequently fumbled back to Cal. USC had five sacks, as Drake Jackson, Brandon Pili, Nick Figueroa and Talanoa Hufanga all had one each, and Marlon Tuipulotu and Caleb Tremblay split one.

Following the touchdown to Falo, Cal was able to tally the final touchdown on a 34-yard run against many USC defensive backups.

After dropping its first three road games this season, the Trojans finished the season 3-3 away from the Coliseum. After narrow wins against Colorado and Arizona State, this was an emphatic road win that should provide some momentum heading into the regular season finale against UCLA at the Coliseum this Saturday.

Slovis threw for more than 400 yards for the third time this season, and his second game in a row. He also broke a streak of throwing an interception in three-straight games.

USC won the opening coin toss and elected to defer to the second half, the first time all year the Trojans have not taken the ball to start the game.

John Houston and Kana’i Mauga tied for the team lead with five tackles.