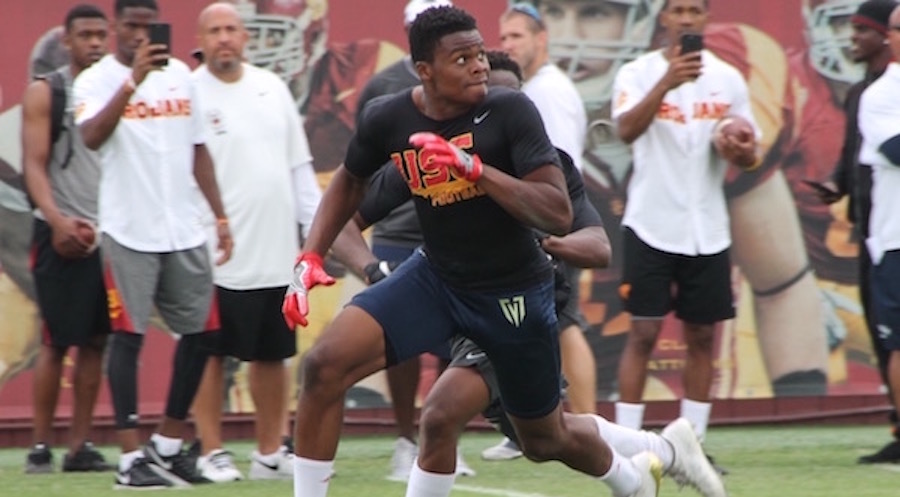 There were a lot of prospects on campus today (over 600) for the first 2017 edition of the USC Rising Stars Camp, primarily from a local angle with more out of state recruits expected for the 2nd edition later this month.

The guy who really stood out was Serra athlete Bryan Addison, who continued his impressive off-season showing by taking part in drills on both sides of the ball. He had an interception on defense where he broke nicely to step in front of the receiver, while on offense he had some good battles with 2019 corner Jeremiah Criddell from Rancho Cucamonga. One scout in attendance called Addison a “Sunday player” and he looks the part these days as he continues to grow into his 6-3 frame. Addison received offers from Michigan and Ohio State immediately following the camp.

Here’s a position-by-position look at some of the other top performers:

QB: I like Bryce Young (2020 from Cathedral) pretty much every time I see him, it’s just not likely that he will be an SC recruit with his 5-11 frame. The kid can play though. And Jalen Chatman from Narbonne is a good athlete too. Chase Petersen from Tesero looked fluid with a solid 6-2 frame. Brad Yafee from Sacred Heart Prep in Northern California was attracting a lot of attention from the Dartmouth coaches in attendance.

RB: Sean Dollars from Rancho Cucamonga showed good hands out of the backfield, and I liked the St. John Bosco duo of Demetrious Flowers (2018) and George Holani (2019).

WR: A good group that included John Jackson (Serra), Devon Cooley (Buena Park) and Nikko Hall (Calabasas) leading the way along with Addison and Michael Ekeize (Colony) also taking reps in addition to other spots (Addison at safety, Ezeike at TE and DB). For Jackson (photo above), the two plays that stood out on his way to an MVP performance were a slant pass where the DB was holding him but he still came away with the catch, and then a deep ball where he got behind Ezeike (admittedly not the swiftest corner at 6-5, 220). Cooley is a solid, all-around receiver, Hall’s game is based on speed. My projection for Ekeize would be tight end, it’s possible he may stick at receiver but his skill set would seem to fit well at tight end.

OL: Solid group that included Chris Murray from Mater Dei, Marco Brewer from Corvallis, OR and Jacob Isaia from Bishop Gorman but one sleeper to watch is Elijah Carson from Morse, he’s 6-9, 300 and looks like he still has some growing to do into his body.

DL: The best high school defensive lineman on the field didn’t take part but it was still good to see Kayvon Thibodeaux from Oaks Christian in attendance. Kayvon got the red carpet treatment from the coaches and he looks physically developed for someone his age, there were legitimate questions on the sidelines from people wondering if he was a recently graduated player walking around. Adam Plant from Bishop Gorman is an Arizona commit and he’s a player that I’ve long liked his game, good sized guy.

LB: Maninoa Tufono is a 2019 linebacker from Punaho in Hawaii and he’s built similar to Jordan Iosefa. Jonathan Perkins is a 2019 player from Summit, same school as Stephen Carr. Jaden Navarrette is a 2020 player from Corona who earned an SC offer last year after Rising Stars.

DB: As mentioned earlier, Addison was really the star of the day but I would also want to mention Criddell, who has built a name for himself this off-season on the 7-on-7 circuit and showed why today. Nice size at 6-1, 185 and plays with a lot of confidence. Andre Hunt from Paraclete is known more as a receiver but took some reps on defense today. Also there but not taking part were a pair of 2019 corners in Max Williams (Serra) and Chris Steele (Bosco, a UCLA commit).

One of the interesting elements of this camp is that coaches from several other schools, including head coaches Jim Harbaugh from Michigan and Jeff Tedford from Fresno State, were among those working the camp.

Several current USC players were either at their position drills or there to provide encouragement, and a lot of them were wearing a Trojan baseball uniform with their corresponding football number.