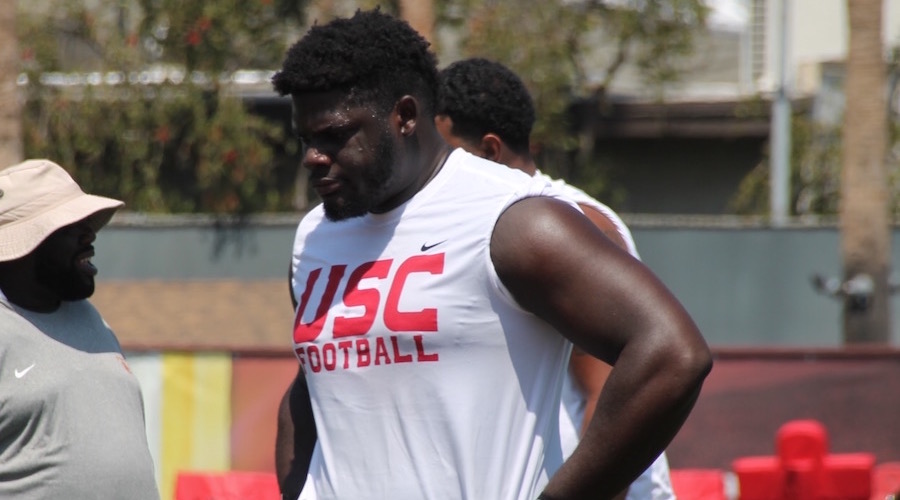 The first day of the 2016 Rising Stars Camp got underway on Wednesday morning, and as expected, there was plenty of talent on hand.

* Three players received offers from USC following their performance in the morning session – Class of 2017 cornerback Tre Swilling (New Orleans, La./Brother Martin), Class of 2018 wide receiver Eric Fuller (Los Angeles, Calif./Hawkins) and Class of 2019 cornerback Max Williams (Gardena, Calif./Serra). Martin showed off excellent speed and explosiveness at the receiver position, earning MVP honors as a result. Williams, meanwhile, was one of the overwhelming stars of the 11-on-11 period.

* Notable USC commits in attendance included Class of 2018 linebacker Raymond Scott, and from the Class of 2017, wide receivers Randal Grimes and Marlon Williams, as well as safety C.J. Miller. Miller, who just pledged to the Trojans on Monday, showcased a nice combination of size and speed, and he also came away with an MVP award. Scott also showed well, running with the No. 1 group at inside linebacker.

* One of the highlights of the morning was the play of a pair of out-of-state Class of 2017 offensive linemen in Miami commit Navaughn Donaldson (Miami, Fla./Central) and Alabama commit Alex Leatherwood (Pensacola, Fla./Washington). Leatherwood, 6-foot-6, 315 pounds, and Donaldson 6-6, 345, both move extremely well for their size. Leatherwood (photo above) lined up at left tackle, while Donaldson went at right tackle.

* Class of 2017 linebacker Fa’avae Fa’avae (Santa Ana, Calif./Mater Dei) had a good morning, coming up with an interception during team drills and earning MVP honors.

* Class of 2019 Los Angeles (Calif.) Dorsey star Kayvon Thibodeaux also stood out. A very good looking athlete, he showed off his versatility by taking reps at both tight end and defensive end.

* Najee Harris, Joseph Lewis, Jalen Hall and Brendan Radley-Hiles were all in attendance, but did not participate.

With many of the standouts from the morning opting not to take part in the afternoon session of the Rising Stars Camp, it was a much lighter workout that lasted all of one hour.

* 2020 quarterback D.J. Uiagalelei received an offer immediately following his performance in the session. Standing 6-foot-4, he will be a freshman at Bellflower (Calif.) St. John Bosco this coming season.

* A number of the big-name out-of-state stars who made the trek to USC were spotted taking tours of the campus immediately before and during the afternoon session. Included in that group was elite Class of 2017 offensive tackle Calvin Ashley (Orlando, Fla./The First Academy). The Auburn commit didn’t participate in either session on the field on Wednesday, but with 6-foot-7, 310-pound size, he still managed to make quite an impression on everyone who saw him.

* The most notable new arrival for the afternoon session was Class of 2018 USC quarterback commit Matt Corral (Westlake Village, Calif./Oaks Christian), who appeared to get some brief work in.

* Another quarterback from the Class of 2018 who stood out was Chase Petersen. Having recently transferred from Mission Viejo to Tesoro, he followed up a morning session that saw him come away with MVP honors, with another solid performance.

* There was still quite a bit of talent at the linebacker position, with Class of 2018 Claremont standout Solomon Tuliaupupu headlining the group. Standing 6-foot-3 and 225 pounds, he’s a very long, fluid looking athlete who took reps both at outside linebacker and inside linebacker. Class of 2019 linebacker De’Gabriel Floyd is another name to keep your eye on. Holding offers from Arizona, Colorado, Pittsburgh and Tennessee, he took reps at both running back and linebacker on Wednesday. He currently stands 6-foot-3 and 221 pounds, and his high school coaches believe that he’s still going to grow up to two more inches. Mater Dei’s Fa’avae Fa’avae also stood out for the second-straight session.

* One under-the-radar player who performed well in both sessions and appeared to catch the attention of the Trojans coaches was Little Elm (Texas) Class of 2017 defensive back John Porter.

* Also participating in the afternoon session were a pair of Class of 2017 tight ends with USC bloodlines in Adam Boselli (Jacksonville, Fla./Episcopal), the son of former offensive lineman Tony Boselli, and Cade Otton (Olympia, Wash./Tumwater), the nephew of former quarterback Brad Otton.

* A number of USC’s incoming freshmen players made their way onto Brian Kennedy-Howard Jones Field throughout the day, including Vavae Malepeai, E.J. Price, Trevon Sidney and Tyler Vaughns.