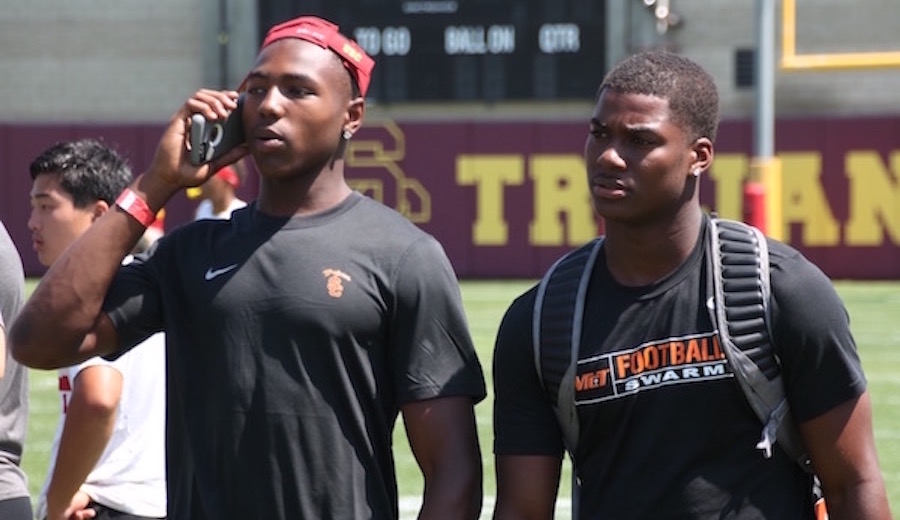 There was a more relaxed feel to Day 2 of the Rising Stars Camp on Thursday morning, with maybe half the total number of prospects taking part compared to Wednesday’s edition, but there were still some notable performances – not to mention three offers going out after the event.

* After showing well on Wednesday, Class of 2018 wide receiver Nikko Remigio (Santa Ana, Calif./Mater Dei) came back with another strong performance on Thursday morning, and he was rewarded immediately afterwards with an offer from the Trojans. He also holds offers from Colorado and Howard.

* Osa Masina’s younger brother, Salua (Salt Lake City, Utah/Brighton), also received an offer following his performance on Thursday morning. Though not nearly filled out as Osa right now, the Class of 2018 LB/DE stands 6-foot-4 and has a nice frame to pile more weight on. Running at outside linebacker, he earned MVP honors.

* There were some notable performances by a quarterback group that included Class of 2018 quarterbacks Blake Stenstrom (Littleton, Colo./Valor Christian) and Chase Petersen (Rancho Santa Margarita, Calif./Tesoro), as well as Class of 2020 signal-caller Bryce Young (Los Angeles, Calif./Cathedral). Having just finished the 8th grade, Young isn’t the biggest quarterback in terms of his size at this point, but he sure has an arm. He was also among those that came away with MVP honors.

* Another Class of 2018 wide receiver who performed well was Chase Cota (Medford, Ore./South Medford). Possessing 6-4 size, he also moves well and won more than his share of battles in the one-on-ones. The son of former NFL safety Chad Cota, he currently holds an offer from his father’s alma mater, Oregon, as well as Oregon State and Washington State.

* Class of 2017 defensive end Nate Neal (Rancho Cucamonga, Calif./Etiwanda) stood out on the defensive line. Showing a nice burst coming off the edge, he was receiving plenty of attention from the Trojans coaching staff throughout the camp.

* While the big-name out-of-state recruits from Wednesday did not take part in Thursday’s action, plenty remained on campus and watched from the sideline, including USC commits Randal Grimes, C.J. Miller and Marlon Williams, as well as Trojans targets Navaughn Donaldson, Alec Jackson, My-King Johnson, Alex Leatherwood and Marco Wilson.

* From closer to home, Class of 2017 defensive end Terrance Lang (Pasadena, Calif./Maranatha) took in the last half of practice

* Safety K.J. Jarrell (Scottsdale, Ariz./Saguaro) also made a brief appearance before going on a tour of campus with his family.