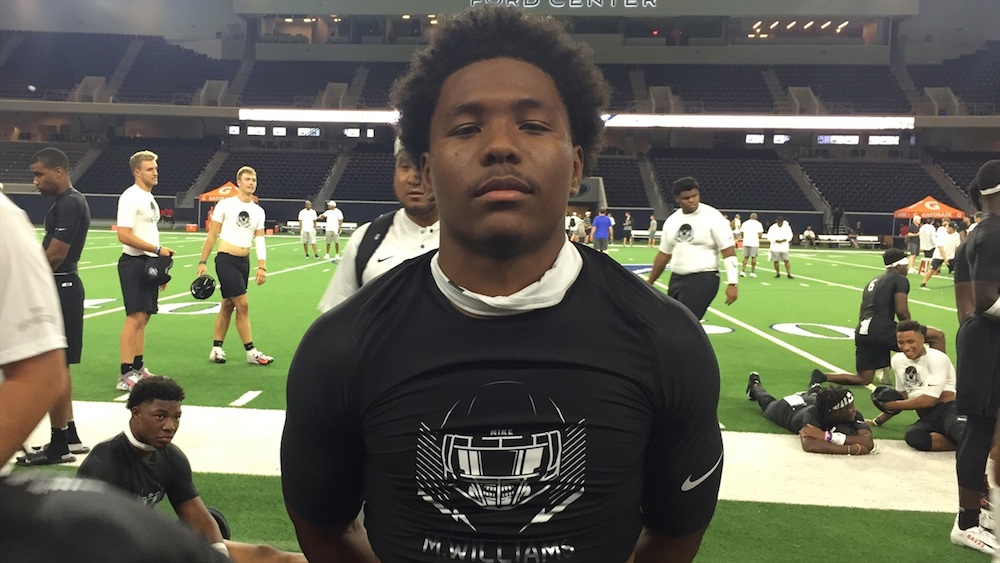 It’s national camp week as the Rivals 5-star challenge and The Opening bring together the top prospects, and here are some of the USC recruits that have stood out so far:

CB Max Williams: The longtime USC offer is proving that he has the cover skills and football IQ to warrant that offer, and the only real question on Max is regarding his size, or rather his lack of height. Max is 5-8, and there aren’t too many Nickell Robey’s or Darrell Rideaux’s being recruited at that height these days for Trojans. Yet at these events it is Williams who is holding his own against the bigger receivers and drawing rave reviews for his play.

WR Kyle Ford: Ford is one of those bigger receivers that dominated early on at The Opening, showing terrific hands and the ability to use his frame as a physical mis-match. Ford and Bru McCoy are the top remaining options at receiver for USC as the coaches want to add more physical size, something that has been evident in the 3 receiver commits so far (a pair of 6-4 receivers and one at 6-2).

DL Kayvon Thibodeaux: These events are the kind where Kayvon’s elite physical traits should allow him to shine and that has happened so far. There is some worry from USC fans when Kayvon says he has not talked with the Trojan coaches lately but he still included the Trojans in his recent top 5 list.

DL Siaki Ika: Siaki tips the scales at 360 yet moves so well and he recently had a good official visit to USC. When it comes to continuing the recent string of large Polynesian nose tackles on the Trojans roster you simply aren’t going to get much larger than Ika.

ATH Giles Jackson: Giles was only recently offered by the Trojans but he brings a speed element and proved that he is one of the most explosive athletes at The Opening with his overall testing numbers.

DB Chris Steele: Chris has long been listed as a corner but the growing consensus is that safety is his probably college position and he is lining up there at The Opening, and looking very comfortable. Chris will make his college announcement on Saturday and I like the Trojans chances on this one.

DB Elias Ricks: One of two top underclass prospects on the USC radar who has shined at the events. Ricks has tremendous size and fits right in among the DB group no matter who he is going against.

LB Justin Flowe: Not that it’s any surprise to those who have been following Justin but he showed a unique physical-ness and urgency of play that has really opened up the national eyes of recruiting evaluators. He’s been one of my favorite recruits from the first time I saw him play, and there’s little doubt he will be among the top ranked players in his class.