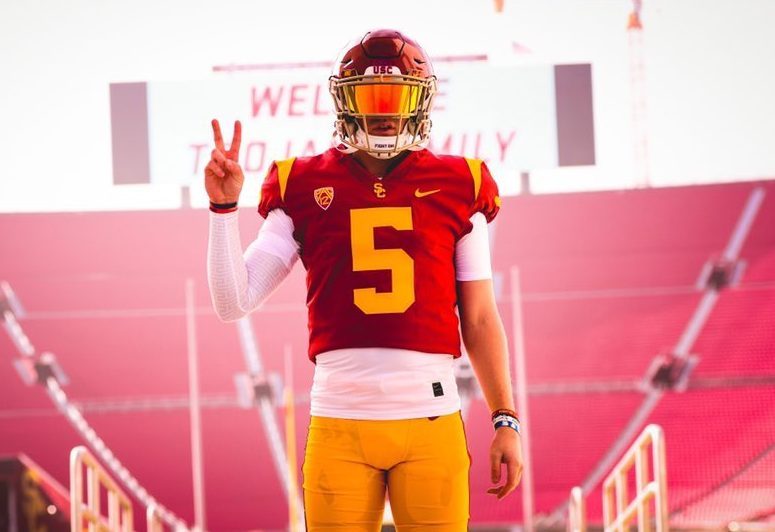 It’s been a fairly busy week for USC recruiting, as the Trojans look to wrap up the 2020 class in the coming weeks, added a commitment from a local preferred walk-on, hosted several official visitors over the weekend, extended a number of offers to 2o21 and 2022 prospects, and, unfortunately, watched Clemson clean up yet again.

USC is without a quarterback or a running back in its 2020 class, as the Trojans lost quarterback Bryce Young’s commitment to Alabama and missed out on running backs Bijan Robinson (Texas) and Ty Jordan (Utah).

The Trojans have their quarterback target for February 5, as USC made a move on Blake Shapen (Shreveport, La./Evangel Christian) just before Christmas and brought him in for an official visit this past weekend.

Shapen is also a standout baseball player and plans to play both sports in college. The one-time Arizona State commit is clearly looking hard at USC. He also picked up a recent offer from UCLA.

USC probably needs to sign a quarterback in this class, and the 6-foot, 185-pound Shapen is an interesting option. He clearly has plenty of athletic ability, but he’s more pocket passer than dual-threat, though he can get out and pick up yards with his legs if he needs to.

Shapen obviously wouldn’t need to play right away for the Trojans, as Kedon Slovis is set to return for his sophomore season, JT Daniels should be healthy for the start of the year and his redshirt sophomore season, and Matt Fink will be back for his redshirt senior season. Programs like to have four scholarship quarterbacks on the roster, and without a clear shot at playing time, it’s tough to imagine a graduate transfer looking USC’s way (or USC spending any time looking for one on the transfer portal). That makes a high school signee a good bet in this class, and Shapen the most likely candidate.

The need is just as obvious at tailback, as the depth chart shapes up perfectly for the 2020 season, but then thins out quickly with the impending departures of Vavae Malepeai and Stephen Carr, and Markese Stepp eligible to leave early following this season. USC is still in the mix for Michael Drennen II (Dublin, Ohio/Dublin Coffman), but Kentucky is still considered the strong leader in that race. But looking to add someone at that position, the Trojans hosted Elijah Turner (Buford, Ga./Buford) on an official visit this weekend.

The 6-foot, 185-pound Turner looks to be the tailback target now, though he doesn’t yet hold an offer from USC. Turner said he very much enjoyed his trip to USC, but because USC doesn’t have a scholarship to offer at this point, he’ll need to wait until signing day to see if another target doesn’t sign and a spot opens up.

There is some chatter that five-star tailback Zach Evans (Houston/North Shore) could take an official visit to USC this coming weekend. Evans’ recruitment has been one of the crazier rides in recent recruiting memory, as he’s already signed and been released from one letter of intent (to Georgia) and trying to guess where he’ll wind up at this point is likely useless. It’s an intriguing development that USC is even being mentioned at this point, but it still should probably be considered a serious longshot.

USC might not sign a linebacker in this class, but the Trojans will add a body to the group, as Danny Lockhart (Bellflower, Calif./St. John Bosco) announced Monday evening that he will accept a preferred walk-on spot at USC. It’s always tough to predict success for walk-ons, but Lockhart is a solid addition to the program and will absolutely make the Trojans better during his time. And it never hurts to find ways to keep tapping into the Bosco pipeline.

Dating back to early last week, USC spread offers out across the country, as the Trojans look to continue building their 2021 and 2022 classes.

The Trojans were also active in Texas and down South, with offers extended to:

In the 2018 class, Clemson grabbed Ohio offensive lineman Jackson Carman away from Ohio State and USC. Losing a battle to Clemson for a prospect at that time didn’t seem like such a big deal.

And it became a big deal when Clemson came into California this past weekend to grab commitments from wide receiver Beaux Collins (Bellflower, Calif./St. John Bosco) and defensive end Korey Foreman (Corona, Calif./Centennial).

Collins is the No. 5 prospect in California, and Foreman isn’t just the best player in the state, he’s the No. 1 prospect in the country. There are two slam dunk additions to USC’s recruiting classes in the past making a commitment to a school across the country almost a year before they can officially sign.

With five-star quarterback Jake Garcia (La Habra, Calif./La Habra) and four-star linebacker Ma’a Gaoteote (Bellflower, Calif./St. John Bosco) committed early, it looked as though USC would be able to build a strong 2021 class. But the Trojans will need to get things moving quickly, as now two of the top five players in the state have committed to Clemson, and a third (linebacker Raesjon Davis) is committed to LSU.