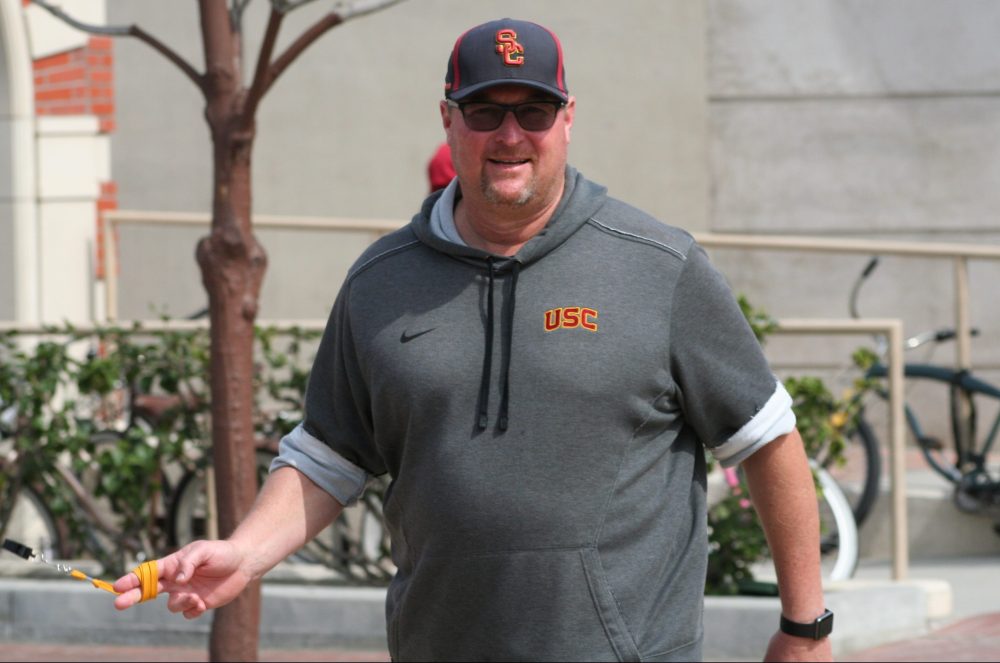 The USC Trojans signed six offensive linemen in the 2020 recruiting class after two consecutive years of bringing in just two high school linemen. It doesn’t look like the Trojans will be caught shorthanded at the position moving forward, as USC already has two commitments from offensive linemen and is chasing several more.

Four-star offensive tackle Jonah Miller (Tucson, Ariz./Sahuaro) is one of those targets still on the board for USC offensive line coach Tim Drevno and the Trojans, and the 6-foot-8, 285-pound lineman included USC among his top six schools on Tuesday morning.

Miller played right guard for Salpointe Catholic last season but transferred to Tucscon (Ariz.) Sahuaro last month. With his frame, he would likely have the ability to move outside at the next level. He is the nation’s No. 256 overall prospect and No. 25 offensive tackle.

That ability to move inside or out makes him a valuable prospect, as does his ability in the run game, where he absolutely dominates opposing linemen and linebackers at the second level.

This should be an interesting recruitment, as four Pac-12 schools with a history of success in Arizona, and all on a recruiting uptick, are going up against each other, as well as two national programs recruiting at a high level.

Oregon grabbed Arizona offensive lineman Jaylen Jeffers in the 2020 class and has made a big impression on 2021 tackle Bram Walden (Scottsdale, Ariz./Saguaro). The Ducks also already have a commitment from Arizona quarterback Ty Thompson (Gilbert, Ariz./Mesquite) in this class.

Washington landed a former Salpointe Catholic offensive lineman in the 2018 class, when Matteo Mele signed with the Huskies.

But in the 2020 class, Salpointe Catholic had two elite prospects and both went out of the state and out of the conference, as running back Bijan Robinson signed with Texas and safety Lathan Ransom signed with Ohio State. Texas is back in the state and looking for another impact prospect, as the Longhorns also signed wide receiver Jake Smith and tight end Brayden Liebrock in the 2019 class.

Miller represents another massive target for Arizona State, a school that is starting to flex its recruiting muscle nationally–and especially in California–but has had very little success in its home state recently. The Sun Devils did not sign a single top-10 Arizona prospect in an absolutely loaded 2020 class and didn’t land one in 2019 either.

In chasing Miller, USC will certainly use the recent success of Austin Jackson, a former Arizona prep standout who became a first-round NFL Draft pick last month after a three-year career with the Trojans. Quarterback Kedon Slovis–another Arizona product who could be on his way to the first round of the draft–might get a mention as well.