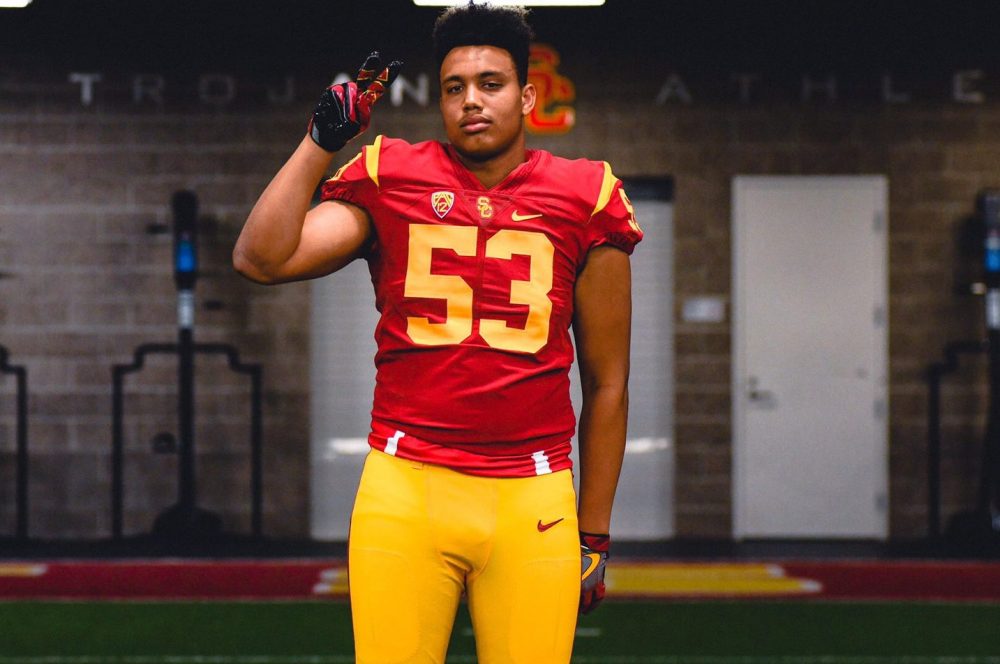 In what is becoming a very familiar scene in this 2021 recruiting class, the USC Trojans placed among the top schools for two four-star prospects on Tuesday.

Academics are a big point of emphasis for Wilkins as he looks for his fit, which explains a majority of the schools on the list. Stanford in particular will be an attractive offer for him, though USC defensive coaches–led by defensive line coach Vic So’oto–have made an impression as Wilkins is another prospect who has noted how involved the Trojan coaches are in his recruiting process.

“He seems like a great guy,” Wilkins said of So’oto back in March. “You can tell the way he talks that he knows what he’s talking about. He understands what he’s doing.”

Wilkins is an especially intriguing prospect for the Trojans because he appears to have the frame and ability necessary to play defensive end in both a three and four-down lineman scheme–something So’oto has specifically said he wants his linemen to be able to do.

Trojans in top 8 for Wiggins

USC is one of three programs to offer standout athlete Nathaniel Wiggins (Atlanta/Westlake) in the past few weeks and wound up in his top eight schools.

Florida and Oregon were the other two to make somewhat recent offers, and those programs join Alabama, Clemson, LSU, Tennessee and Texas in a list of recruiting heavyweights going after the nation’s No. 195 overall prospect and No. 11 athlete.

The 6-foot-2, 170-pound Wiggins is someone who could truly play wide receiver, cornerback or safety in college, and is a little reminiscent of USC commitment Calen Bullock in that regard. While Bullock is perhaps more suited to safety at the next level, Wiggins might tend towards cornerback, though he’s someone that multiple position coaches might try to pull into their groups. It doesn’t take much more than the first clip of his highlight video to see what he can bring to the cornerback position with his frame and speed, as he reads a fade on the goal line, tips the ball to himself and returns it roughly 108 yards for a touchdown (of course, on the next play he takes a quick wide receiver screen, jukes three defenders, splits two more with his speed and races for a 44-yard touchdown).

This is a big-boy recruiting battle, as the two Pac-12 programs will try to pull Wiggins out of SEC territory against some of the best recruiting programs in the country, but the Trojans haven’t shied away from these kinds of challenges in this 2021 recruiting class.

When Wiggins picked up the offer from the Trojans in mid-April, teammate and fellow 2021 prospect Demarko Williams tweeted of the offer: “this the one we been waiting on fam #Fighton“

USC holds commitments from three defensive backs in the 2021 class, as safety Xamarion Gordon (Downey, Calif./Warren) and defensive athletes Anthony Beavers (Harbor City, Calif./Narbonne) and Bullock has committed. Beavers could wind up at safety or potentially move to linebacker. The Trojans also have one wide receiver commitment, as Quay Davis (Dallas/Skyline) pledged this past Friday.