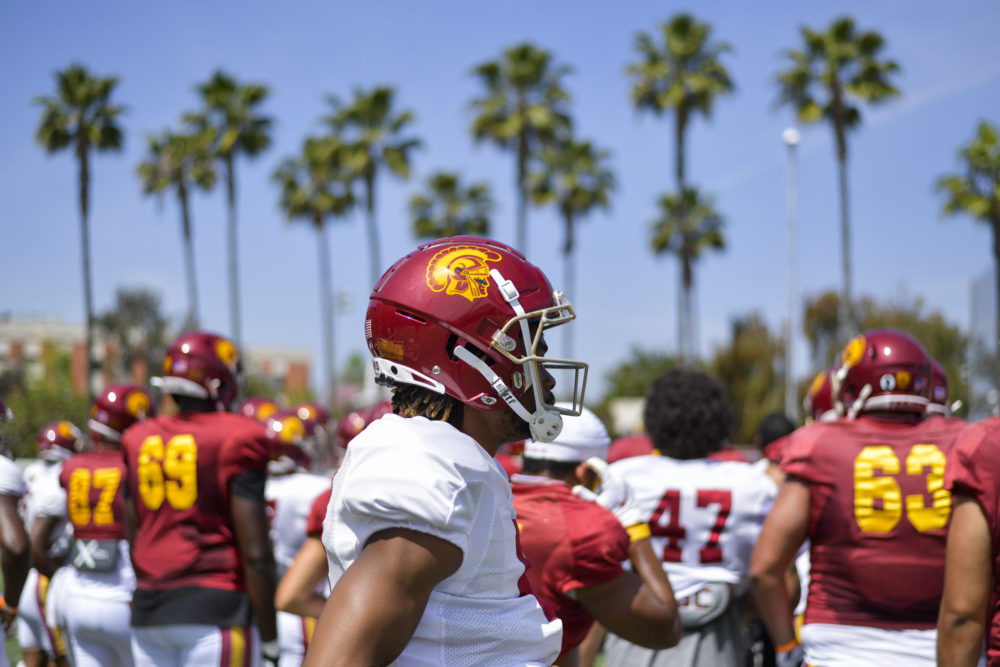 USC has attacked the June recruiting period as well as any program in the country and while the commitments haven’t piled up in terms of total numbers (two thus far) the quality of the commitments, the momentum building and the prospects who have taken official and unofficial visits has been outstanding. Nearly a week after USC landed a commitment from five-star defensive tackle Mykel Williams (Columbus, Ga./Hardaway, the Trojans tallied another significant commitment on Sunday with an announcement from four-star cornerback Jaeden Gould (Oradell, NJ/Bergen Catholic) on Sunday.

USC now holds the No. 12 recruiting class in the country and sits at No. 1 in the Pac-12 with just eight commitments, including two five-star and four four-star prospects.

Gould is the No. 153 overall prospect and No. 18 cornerback in the 2022 class, joining five-star Domani Jackson (Santa Ana, Calif./Mater Dei) and four-star Fabian Ross (Las Vegas/Bishop Gorman) in giving the Trojans a terrific group of commitments at the position. There is still time for things to shake out in plenty of different ways and recruiting is often subject to significant twists and turns as seasons progress and signing day comes closer, but with those three and a fourth spot potentially open for high four-star prospect Gentry Williams (Tulsa, Okla./Booker T. Washington) — who is coming off an official visit to USC with the Trojans potentially sitting in a very good spot for the nation’s No. 36 overall prospect — the Trojans could be putting together the best cornerback class USC has seen in a long time.

Like Williams did early last week, Gould was quick to turn recruiter for USC and he’s calling his shot in terms of the Trojans’ recruiting momentum.

Top 10 class and we not done yet… #FightOn

The next prospect to keep an eye on is three-star running back De’Anthony Gatson (Newton, Tex./Newton), who is schedule to announce his commitment on Tuesday. The 5-foot-10, 200-pound back became a top target for USC after the Trojans offered in March and he took an official visit to campus in early June. Colorado and Texas are also in the mix. USC needs at least one, and likely two, high school backs in this 2022 class, although the transfer portal has made things interested at the position. The Trojans brought in former Texas back Keaontay Ingram before spring ball and recently announced the addition of former TCU back Darwin Barlow. Interestingly, Barlow attended the same high school as Gatson in Texas.

USC is scheduled to host five-star running back Raleek Brown (Santa Ana, Calif./Mater Dei) on an official visit early this week, and the Trojans are hoping they can sway him from his Oklahoma commitment. Brown would be a massive addition to the offense. He’s one of the top offensive players, regardless of position, in this class and a standout as a runner and receiver.

Sticking at running back, USC hosted five-star prospect and No. 2 running back in the 2023 class Rueben Owens (El Campo, Tex./El Campo) on Monday. He was in town along with 2024 offensive tackle Gibson Pyle (Houston/Klein Cain). Owens decommitted from Texas late last week and he’ll be one of the top overall offensive prospects in his class.

The Oklahoma theme is consistent as well, with Williams visiting this past weekend along with four-star defensive tackle Chris McClellan (Owasso, Okla./Owasso). He’s become a top defensive tackle target for USC, but Florida, Ohio State and Oklahoma are very much in the picture.

Thank you for having me and the fam this weekend! #FightOn ✌🏾 pic.twitter.com/w3WYYYR8f3

Marshall is an elite athlete who didn’t begin playing football until his junior season. He’s the nation’s No. 112 overall prospect and No. 13 wide receiver and at 6-foot-3, 195 pounds, he can line up anywhere with his combination of size and speed. Texas A&M is a likely destination for him, but USC is continuing to push and could be a real option.

This pic is a glimpse of @chhris_m L.A. 💙 and 🤩 this past week!! Thank you Coach Helton @CoachBC_ @kearycolbert and the remainder of the @USC_FB Family for showing the Marshall family a GREAT time. It is truly a PLACE LIKE NO OTHER. Business and 🏈!! pic.twitter.com/w6wdgC7sDH

Olson is a 6-foot-6, 285-pound tackle whose father attended Oregon State, so the Beavers likely have a leg up in that recruitment. Utah is involved as well. The Trojans saw one offensive line target commit on Monday, when four-star guard George Maile (South Jordan, Utah/Bingham) announced his commitment to Baylor following a visit over the weekend. Olson is a very good athlete at tackle and has a nice frame for the position.

What an incredible time in LA! Big thanks to everyone that made this weekend possible. Can’t wait for move in day! Fight On!! ✌️❤️💛 pic.twitter.com/gZByEUnMHj