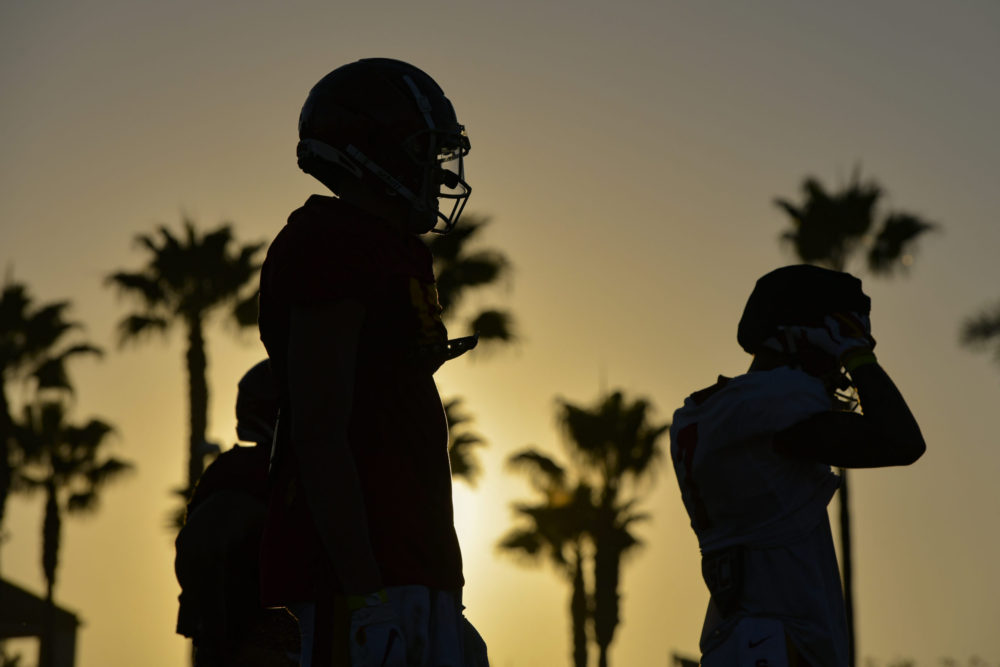 In this week’s roundup, USC saw two of its remaining targets announce decommitments from other schools. The Trojans extended another 2022 wide receiver offer. And two tight end commitments have had terrific 2021 seasons.

Two targets back on the board

That happened twice for the Trojans this week.

The first was seemingly a foregone conclusion for a while now. Class of 2021 offensive tackle Austin Uke (Dallas/Parish Episcopal School) was an unranked prospect committed to Holy Cross a short time ago. But in the midst of a terrific senior season, Uke grabbed offers from Florida State, Houston, Penn State, Missouri, Georgia Tech and USC. He also grabbed a four-star rating. And now, the 6-foot-4, 265-pound offensive lineman is no longer committed to Holy Cross after he announced his decommitment on Sunday.

The in-state schools — Houston and SMU — will be ones to watch here, but it’s clear the Trojans would be just fine adding another offensive lineman to their 2021 recruiting class.

The Trojans extended an offer to Washington State commit Joseph Manjack (Tomball, Tex./Memorial) in late October and now nearly one month later, Manjack announced his decommitment from the Cougars.

Utah and Houston also extended offers between the one from USC and his decision to decommit. The 6-foot-3, 200-pound wide receiver is another prospect who is having a tremendous senior season and seeing that pay off on the recruiting trail.

He was especially impressive this past weekend.

USC has shown it won’t hesitate to offer any number of wide receivers in any class, as the Trojans need numbers at the position in this offense.

The USC coaches have also shown that they won’t wait around for those receivers to pick up a number of offers before the Trojans step in. Recently, USC joined the race for 2022 wide receiver Antonio Williams (Irmo, SC/Dutch Fork), and the 6-foot, 180-pound receiver only picked up his first offer a month ago.

USC tight ends aren’t going to set any records this season, but the group is certainly outplaying its 2019 production, despite fewer available bodies. Erik Krommenhoek has caught touchdowns in each of the past two games and Jude Wolfe has been a consistent presence when not sidelined with injury.

More bodies are on the way at that position, as USC has commitments from Michael Trigg (Tampa/Carrollwood Day) and Lake McRee (Austin, Tex./Lake Travis). Both have been on the field this fall and both bring dynamic presences to the offense.

There go the Buckeyes

USC has three commitments in the 2022 class and it’s a good start, with a quarterback, center and four-star linebacker. But Ohio State is off and running in a way that is likely to leave every program far behind.

This has been an extremely impressive run for Ohio State, and another reminder of what the Trojans are up against in trying to close the gap on those elite recruiting programs up in the top two or three of the rankings.