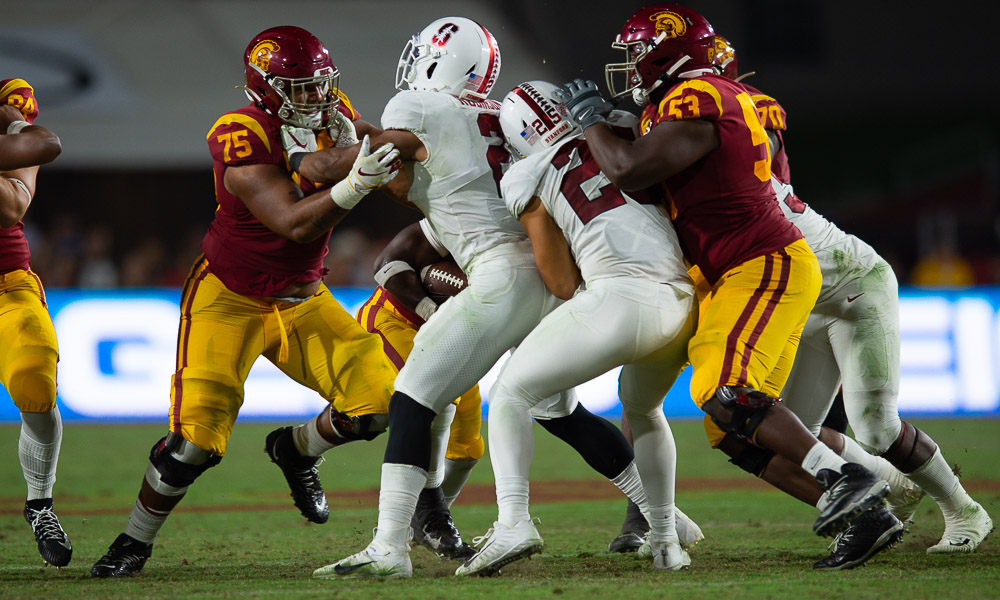 USC’s 2021 recruiting class has dropped out of the top 10 nationally, though the Trojans still have a very good collection of talent and check in at No. 11 overall. But the Trojans missed two opportunities to add to their offensive line haul over the past week, as an elite target and an intriguing three-star tackle committed elsewhere.

It isn’t just that USC lost out on two tackle prospects. It’s that the Trojans will likely be seeing them on opposing sidelines in the future.

The biggest blow was four-star tackle Kingsley Suamataia (Orem, Utah/Orem) announcing his commitment to Oregon last week. Suamataia was a strong Oregon lean for some time, but USC had done well in his recruitment and worked hard to keep the Trojans in the mix.

Suamataia is the West region’s top offensive lineman and he joins an Oregon class that already had a commitment from the region’s No. 2-ranked offensive lineman, in tackle Bram Walden (Scottsdale, Ariz./Saguaro).

USC has a couple of intriguing linemen committed in this class, and offensive tackle Mason Murphy (San Juan Capistrano, Calif./JSerra) is a prospect who looks like he could outperform his ranking. But looking at ESPN’s recruiting rankings, of the top five 2021 offensive linemen in the West region, four of them are now committed to Oregon.

USC also came up short in its pursuit of three-star tackle Jack Leyrer (Dallas/Highland Park), who announced his commitment to Stanford this past Friday. The 6-foot-6, 275-pound tackle picked up an offer from USC over the summer, but Stanford is always difficult competition when it comes to an academic-oriented offensive lineman, and even Texas couldn’t keep the tackle in state.

These are only verbal commitments and nothing becomes binding until signing day, but these were not lightly-made decisions and flipping either will not be easy.

One uncommitted tackle option still on the board is Ty Buchanan (Corpus Christi, Tex./Calallen), who picked up a USC offer in early August. That offer from the Trojans came on the same day that Texas Tech extended an offer, however, and the Red Raiders are very much an option for Buchanan.

The 6-foot-5, 280-pound tackle has put together some impressive film through several weeks of his senior season.

USC holds commitments from two wide receivers and a tight end, but the Trojans are still looking to round out that receiving corps in this class. With a few prospects still on the board, USC extended a new offer last week, as three-star Stanford commit Josh Moore (Atlanta/Marist School) officially joins the list.

Moore committed to Stanford back in April as a safety and hasn’t shown signs of wavering, but the Trojans are hoping they can make an impact in recruiting him as a wide receiver. The 6-foot-2, 195-pound athlete is plenty capable of playing either safety or receiver at the next level.

It’s been something of an odd recruiting trip at the wide receiver position in this class. The Trojans have commitments from two good ones in Quay Davis (Dallas/Skyline) and Michael Jackson III (Las Vegas/Desert Pines), but this is a really good year for top-end talent in California at the position and at this point it looks as though the Trojans will strike out with all of them.

Beaux Collins (Bellflower, Calif./St. John Bosco) is committed to Clemson, while Troy Franklin (Menlo Park, Calif./Menlo-Athlerton) is headed to Oregon and Xavier Worthy (Fresno, Calif./Central East) is a Michigan pledge. All three are Top-75 prospects in this class.

Jackson did get some good news over the weekend, as he was officially invited to participate in the Under Armour All-America Game following his performance at the Underclassman Camp in Las Vegas this past weekend.

Another running back off the board

USC is also seeing its available options at running back dwindle. USC has a strong commitment from a very talented back in Brandon Campbell (Katy, Tex./Katy), but a second back in this class was seen as almost mandatory, as USC didn’t sign a running back in the 2020 class and will be left with just Markese Stepp and Kenan Christon following the departures of seniors Stephen Carr and Vavae Malepeai.

Tavierre Dunlap (Del Valle, Tex./Del Valle) likely won’t be that second running back, as the three-star prospect announced his commitment to Michigan this past Saturday.

The big name still on the board is Byron Cardwell (San Diego/Morse), the top running back prospect in California and a top-10 tailback in the country. He hasn’t given a ton of hints about where he might wind up, but USC is one of several Pac-12 programs pursuing him heavily.

USC will also still look into Texas for its second back in this class, as Mike Jinks continues to use his ties there and three-star prospect Alton McCaskill (Conroe, Tex./Oak Ridge) is still in play. Alabama, Oklahoma State and Virginia Tech are just a few of the other programs recruiting the 6-foot-1, 200-pound McCaskill.

2022 quarterback could make a decision soon

USC has several local quarterbacks on its radar for the 2022 class, with AJ Duffy (Moreno Valley, Calif./Rancho Verde) a major target. But the Trojans jumped into the race for Devin Brown (Queen Creek, Ariz./Queen Creek) with an offer on Sept. 1, and Brown said the USC coaches have been serious in their pursuit of him. Offensive coordinator Graham Harrell might not have to wait much longer for Brown to make a decision, as he said there’s a chance he could be ready to commit before his first game this fall, scheduled for early October.

One of those offers went out to Dave Iuli (Puyallup, Wash./Puyallup) recently, and the four-star offensive guard said his relationship with USC offensive line coach Tim Drevno and the Trojan coaches has developed to the point where USC very much interests him as a potential option.

Burrell a versatile option for 2022

USC defensive coordinator Todd Orlando employs a defense that asks its defensive linemen to line up in different ways and defensive line coach Vic So’oto has said he wants defensive linemen who can seamlessly make transitions between alignments. That ability to be versatile up front is something 2022 defensive end Nate Burrell (Bellflower, Calif./St. John Bosco) prides himself on, as the four-star defender looks like a real option for the Trojans in this next class.

USC is going to sign a really talented class of defensive backs in this 2021 class, but the Trojans are going to immediately be in the mix for some talented safeties in the 2022 class. One of those is Zion Branch (Las Vegas/Bishop Gorman), who has been a top USC target for some time.

The four-star safety is the No. 60 overall prospect in his class and few 2022 recruits possess his brand of athleticism, which he put on display over the weekend.