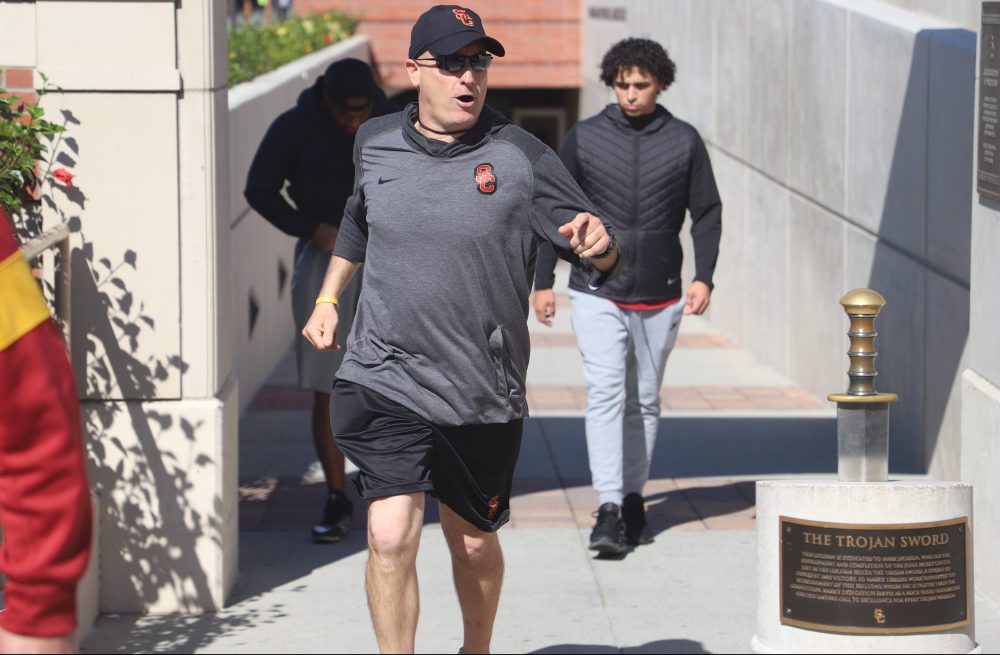 USC didn’t pick up any commitments over the past week, but the Trojans continued to lay some serious groundwork in Texas, extending offers to 2022, 2023 and 2024 class prospects. The Trojans also went in on a couple big men and tried to shake things up in the race for two 2022 prospects.

After Ohio State turned Michael Thomas and Chris Olave into starts, it should be noted every time the Buckeyes look West for a wide receiver who is rated as good, but not quite elite. That’s the case in the 2022 class with Kyion Grayes (Chandler, Ariz./Chandler), a four-star recruit who checks in as the No. 322 overall prospect and No. 45 wide receiver.

Grayes seems all but locked into Ohio State at this point, but Arizona, Oregon and others are still hoping to make an impression. USC has a couple of elite local wide receivers in its sights, in four-star C.J. Williams (Santa Ana, Calif./Mater Dei) and five-star Tetairoa McMillan (Anaheim, Calif./Servite), but the Trojans extended an offer to Grayes this past week in the hopes of making an impact.

The 6-foot-1, 170-pound Grayes is simply an all-around solid receiver at this point, with the room to add size and speed at the next level. USC signed three prep wide receivers in the 2021 class and also brought in Colorado transfer K.D. Nixon, but the Trojans will lose Nixon and potentially Drake London following this season, and adding at least three receivers per year isn’t out of the question with this offensive system.

It’ll be a significant uphill battle, but USC is hoping it can make some late noise with defensive tackle Kristopher Ross (Houston/North Shore).

The 6-foot-3, 265-pound defensive lineman announced a top four of Baylor, LSU, Oklahoma and Texas on Friday, and USC quickly sent out an offer to Ross on Sunday. It’ll take some shuffling of his top schools and a quick recruiting process to land a commitment from Ross, who also announced that he will be making a commitment on February 19.

But no matter which school he chooses, Ross won’t have held an offer for long, as LSU only offered the day before he included the Tigers in his top four, Texas and Oklahoma offered in early February, and Baylor offered in mid-January.

Ross is extremely quick off the line of scrimmage and uses his hands well both as a pass rusher and to shed blocks in the running game. It’ll be worth watching to see if Ross updates his top group to include USC heading into his decision day, or if he’s set on one of the schools closer to home already.

USC extended an offer to 2022 athlete Antavious Woody (Lafayette, Ala./Lafayette) last week. Most high school athletes are guys who can play skill positions on either side of the ball — typically wide receiver or defensive back. But Woody is a 6-foot-5, 270-pound prospect who plays both offensive tackle and defensive end, and might be able to play either at the next level. Adding to his “athlete” label, Woody also punted and carried the ball a bit for his team this past season, and has also played both baseball and basketball in high school.

He’s unrated at this point, but unlikely to stay that way for long, as Auburn, Texas A&M and USC all offered on the same day. Woody also holds offers from Florida State, Indiana, Kentucky, Mississippi State, Ole Miss, South Carolina and others. He thanked Vic So’oto when he announced the USC offer, so this could potentially be an offer at defensive end from USC.

It’s been well-documented that a number of USC coaches and personnel have strong Texas ties, but safeties coach Craig Naivar might be at the top of the list. He played high school football in the state and coached college football for 21 years in Texas.

Cornerback Jamel Johnson (Arlington, Tex./Seguin) will ultimately end up as a no-brainer offer, and programs proved that this past week. The 6-foot-1, 175-pound cornerback came into the week with a couple offers, including Michigan and Arkansas. But he put together a special run on the recruiting trail, as Johnson landed offers from Alabama, Kansas State, LSU, Oklahoma, Penn State, Texas, Texas A&M, Tulsa and USC in a two-day span.

Johnson has great size and instincts at cornerback, and he brings some of the ball skills as a wide receiver as well.

The 6-foot-1, 185-pound prospect shows a lot of the “run and hit” mentality that Naivar loves in his defensive backs.

USC also became the very first offer for 2023 cornerback Ryan Yaites (Denton, Tex./Guyer), a 6-foot-2, 175-pound prospect who could wind up at cornerback or safety at the next level. Yaites had a nice sophomore season and shows good ability in coverage for a young player. It’ll be interesting to see if this offer from USC starts a bit of a recruiting run for him, and whether USC being his first offer means something when it comes time for him to start seriously weighing his options. That first offer can sometimes be a big one, whether it’s from a local school or one out of state.

Naivar also got USC in very early on 2024 cornerback Jordon Johnson-Rubell (Fort Worth, Tex./Brewer). The 5-foot-11, 160-pound corner turned in an outstanding freshman season and looks as though he’ll be one of the state’s best defensive backs over the coming years. He possess great speed and played with a lot of confidence outside as just a freshman. USC joined Colorado, Kansas and Tulsa in extending very early offers at this point.

The Trojans also got involved in Texas on the offensive side of the ball as well, as offensive coordinator Graham Harrell and running backs coach Mike Jinks extended an offer to 2023 running back Tre Wisner (Waco, Tex./Connally).

The 5-foot-11, 180-pound back is a tremendously smooth runner with excellent vision and cutting ability. He’s also a weapon in the passing game. He’s been on a bit of a recruiting run as well, as Ohio State, Baylor and Texas joined USC in offering in a three-day span.

USC will chase some of the nation’s best offensive linemen in the 2022 class, and the Trojans have set their sights on the elite 2023 prospects up front as well. USC joined the chase for potential five-star 2023 offensive tackle Kadyn Proctor (Des Moines, Ia./Southeast Polk) this past week.

The 6-foot-7, 300-pound tackle is already one of the nation’s best players regardless of position in the 2023 class and he’ll be in the discussion for top overall offensive lineman. In the early rankings for 247 Sports, he’s the No. 31 overall prospect and No. 3 offensive tackle.

Proctor is very athletic for his size and looks like a future first-round tackle selection. Not surprisingly, he has plenty of suitors already and could wind up being a difficult prospect to pull far from home, as Iowa, Michigan, Nebraska, Notre Dame and Ohio State have all made early offers. Arizona State, Oregon and Texas A&M have offered as well.