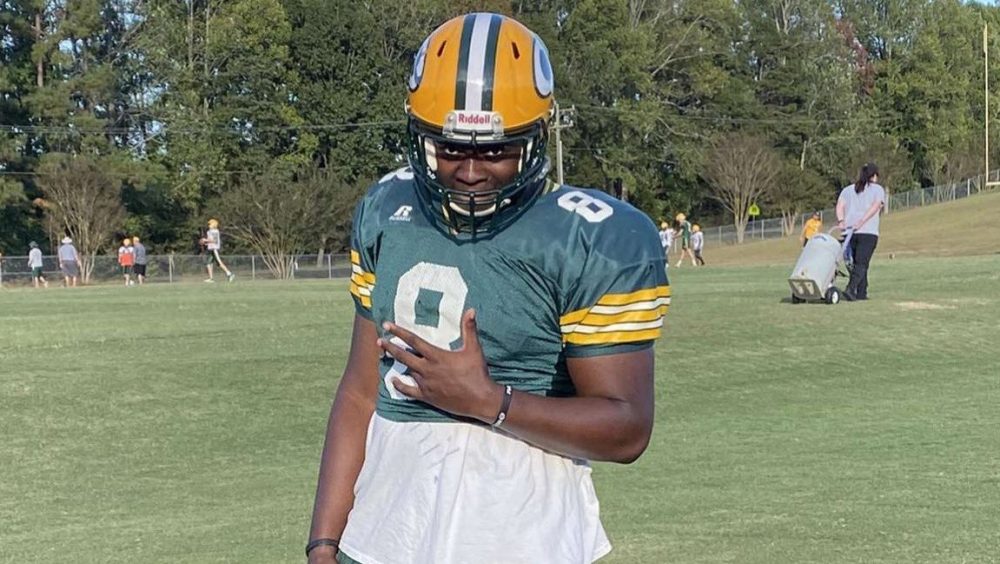 USC has extended a handful of offers to 2022 prospects since coaches have been able to initiate correspondence, beginning Sept. 1. One such offer went out to defensive end Eli Hall (Shelby, NC/Crest). The 6-foot-4, 250-pound lineman went on a mini run of offers beginning in early September, with Georgia, Minnesota and USC offering in consecutive days. Those added to offers that were already on the table, from Auburn, Michigan State, South Carolina, Virginia Tech and others.

The USC offer came during a long discussion with Trojans’ defensive line coach Vic So’oto. During his time at Virginia, So’oto developed a strong presence recruiting the East Coast and he hasn’t been shy about going back there to recruit prospects now that he is at USC.

Hall said interest from USC only began on Sept. 1, when So’oto followed him on Twitter. They went back and forth for a few days before Hall’s head coach told him that the USC coach wanted to speak with him over the phone.

Hall said the offer came during a 45-minute conversation with So’oto, and ultimately it surprised him.

“We were talking about a little bit of everything–my upbringing, who I stay with, my relationship with everybody in my family,” Hall said. “I really like him. I feel like he’s really direct in what he wants.”

Hall said he is no rush to make a decision on a school at this point, but the USC offer is definitely one he will consider.

“I always watched them when I was a kid,” Hall said of the Trojans. “They’ve always been good. They’ve always had a great defense and great running backs.”

Hall believes he fits best as a 4-3 defensive end, but his size allows him to be versatile along the line–a trait So’oto is clearly looking for in his recruiting targets. Hall’s athletic ability comes through on the offensive side of the ball as well, as caught a 23-yard touchdown pass as a sophomore and added a handful of rushing attempts. He also chipped in four points and five rebounds per game for the basketball team.

“I’m a great run stopper and pass rusher,” Hall said when critiquing his game. “Whatever you tell me to do, I’ll do my best to get it done.”

In a future school, Hall said he wants it to feel like another home, and somewhere that education is important.

It’s usually not easy to pull a recruit from across the country, but it sounds like USC will have a shot with Hall if So’oto and staff go all in recruiting him. Hall said he was surprised the Trojans would be looking so far from home, and so the decision to offer him carries extra weight.

“I was talking to my uncle and grandpa about that, asking if anybody around here has been recruited by them before,” Hall said. “They don’t have to come to the East Coast to recruit a good player. They can stay where they are to do that. So them reaching across the country is eye-opening.”

Right now, USC is unable to host any kind of visits on campus due to the NCAA-imposes dead period that extends through September 30. That still could be extended further, but whenever it ends, USC is likely to see Hall on campus.

“My and my family, if they let us visit whenever this virus goes down, we are most definitely taking a trip,” Hall said. “I like where it is in general. I’ve heard so much about it. I want to see what’s there.”

It’s been a hectic start to the month for Hall, as coaches have been contacting him non-stop.

“It’s crazy,” he said with a laugh. “Sometimes I have to turn my phone off.”

Garcia gets some game action

Jake Garcia (Valdosta, Ga./Valdosta) led his new team to a come-from-behind win in the first game of the season. While Garcia took more than a few shots from his opponent, he showed plenty of toughness in staying in the game and ultimately orchestrating a 28-25 win thanks to a couple late scoring drives. The USC quarterback commitment transferred to Georgia so that he could play a fall football season before heading to USC as an early enrollee, and his hope is that the game action this fall gives him a leg up when he get to college in January.

While official and unofficial visits are not permitted during this dead period, some prospects have taken it upon themselves to organize unofficial, unofficial visits to campuses. No. 1 overall prospect and top USC target Korey Foreman (Corona, Calif./Centennial) has now participated in two of these, as he visited Georgia along with good friend and five-star defensive end Maason Smith (Terrebonne, La./Houma). This past weekend, Foreman was in Baton Rouge, checking out LSU.

LSU had a number of commits and targets in attendance, as USC linebacker target and LSU commit Raesjon Davis (Santa Ana, Calif./Mater Dei) was there as well.

And it isn’t just Ed Orgeron and the Tigers’ coaching staff recruiting Foreman to LSU.

Simon with the one-handed grab

High school football fans have seen the last of Julien Simon (Tacoma, Wash./Lincoln), as the four-star athlete has announced that he will enroll early at USC rather than stay in high school for his senior season. But USC fans are just getting a taste of what he can do, as Simon once again showed that he has some of the best ball skills of any defensive prospect in this class.

It’s only 7-on-7, but it’s another small example of what Simon can do on the football field. As a junior, Simon caught 83 passes for 1,033 yards and 12 touchdowns, and added four interceptions on defense. As a sophomore, Simon picked off five passes, returning three of them for touchdowns.

There are some defensive players that just have an innate ability to wind up with the ball in their hands, and Simon is one of those guys.

USC entered the mix for 2022 quarterback Devin Brown (Queen Creek, Ariz./Queen Creek) on Sept. 1, as the Trojans extended an offer. The 6-foot-2, 190-pound quarterback holds offers from both in-state schools, as well as Michigan State, North Carolina State, Wisconsin and others. The Trojans have a few 2022 targets locally, but offensive coordinator Graham Harrell has shown that he’s comfortable chasing any prospects he feels fit his system, and the 6-foot-2, 190-pound Brown is one of them.

USC also extended an early September offer to four-star running back Tavorus Jones (El Paso, Tex./Burges). Jones is the nation’s No. 117 overall prospect and No. 9 running back.

The 5-foot-10, 180-pound back already has some heavy hitters on his offer sheet, as Alabama, Auburn, Florida, Michigan and all the big Texas schools have offered.

USC and running backs coach Mike Jinks aren’t shy about going into Texas to chase prospects, and the Trojans are hoping they can go back-to-back years with a Texas tailback, as Brandon Campbell (Katy, Tex./Katy) is firmly committed in the 2021 class.